It was a dark and stormy night… 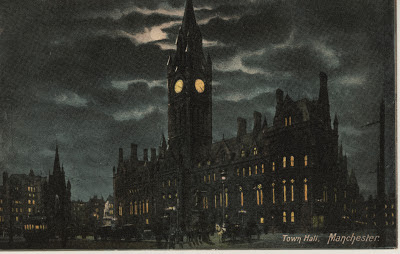 This atmospheric image of Manchester Town Hall on a moonlit night was produced in the early years of the twentieth century and is part of a large album of postcards featuring Manchester scenes.

Unfortunately we know very little about the provenance of the album, which contains over two hundred postcards dating from the Edwardian period. There are three night scenes, including St Ann’s Square, the Ship Canal and the Cathedral as well as the Town Hall. These were published by Delittle, Fenwick & Co of York, as part of the D.F.& Co series.

You can see these and other postcards from the collection on our new Flickr page here.