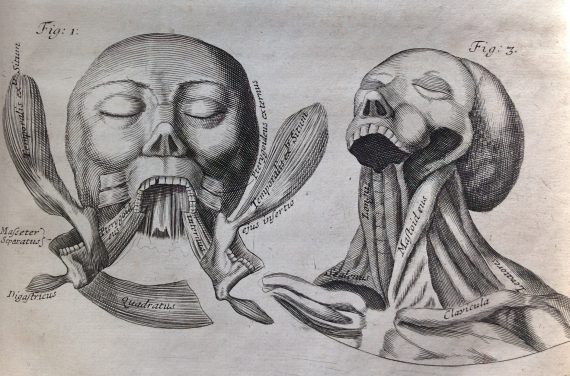 Mycrographia Nova: or, a graphical description of all the muscles in the humane body, as they arise in dissection (1697) is a glorious work of medical illustration. The work consists of six lectures, illustrated by elaborate copper-plates. It first appeared in manuscript in 1675 and was published in 1681 as A Compleat Treatise of the Muscles, and then printed under its Latin title in 1684, the first in which the names were engraved on the muscles in each plate, an innovation which was used in all subsequent editions of the book.

The book was very popular and went through more than ten English and continental editions. But, like another great work of medical illustration, William Cowper’s Anatomy of Humane Bodies (1698), it is a work of plagiarism. Browne’s text is a nearly a word-for-word transcription of William Molins’s lesser-known Myskotomiai or the Anatomical Administration of all the Muscles of an Humane Body (1648 and later), and the plates were copied with some alterations, from the reduced versions of the Fialetti engravings in the 1632 Frankfurt edition of Casserio’s Tabulae Anatomicae.  Nowhere did Browne acknowledge the borrowings from from Molins and Casserio.