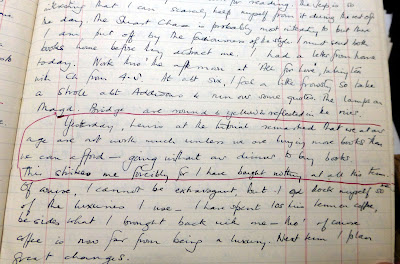 John Reed (whose diaries we have recently acquired)was at Magdalen College in the early 1950s where he was a diligent if rather anxious student. He enjoyed all the usual activities of an Oxford undergraduate, rowing, cycling, eating crumpets and talking into the night and falling in love with a fellow student, though Brideshead it was not!
He was very fortunate to be allocated as his tutor the renowned writer C.S.Lewis. The first mention of his tutor is on Saturday 19 January 1950:
“Lewis seems rather hard upon grammatical inaccuracy and loose thinking; I do not know what his reactn to most of what I have written may be. Out on bicycle to M&S to buy bread and tarts.“
Lewis was regarded as an exceptional teacher by many of his pupils, including Kenneth Tynan, who revered him. By contrast, the poet John Betjeman considered him unfriendly, demanding, and uninspiring, blaming him for his rustication from Oxford.
Reed is clearly captivated by Lewis from the start, and is very keen to make a good impression, although he is frequently shocked by what he describes as his tutor’s “strong tendency to use seamy analogies and forthright terms“.
February saw Reed attending discussions in Lewis’s rooms. In his diary he notes that “half a dozen undergrads and the Cannon stay for a cool pint from the corner cupboard. During quaffing time the conversation comes back to morality again and the Cannon… remarks surely the average undergraduate does keep a woman in his room – or only refrains from doing so for fear of the proctors. Lewis is less hopeful. ‘There’s a great deal of fornication goes on in the university’, he says, ‘andhomosexuality too!'”
In June, poor Reed became most uncomfortable when, during conversation about Shakespeare’s Antony and Cleopatra, Lewis “quite unnecessarily tells me how last night he was reading Shakespeare’s sonnets – ‘one has always at the back of the mind whether these sonnets were written about buggery…'”
By the end of his first year, however, Reed had succeeded in impressing his tutor. He writes:
“I quote Lewis’s words about me as I jotted them down soon afterwards ‘I shd like to praise Mr Reed’s work almost as highly as I can. I am almost afraid to do so because I have known so many – well not so many – but several – who have started so well but then dropped off….So I shd like to praise his work as highly as I can with the reminder that it will not keep itself up of its own accord’. I find it hard to express how elated this high praise makes me. All that self discontent which I have nursed most of the term falls from me. I am confident, capable’.

Throughout the following two years John Reed’s work continued to ‘keep itself up’, and he left Oxford in 1952 with a Congratulatory First in English.