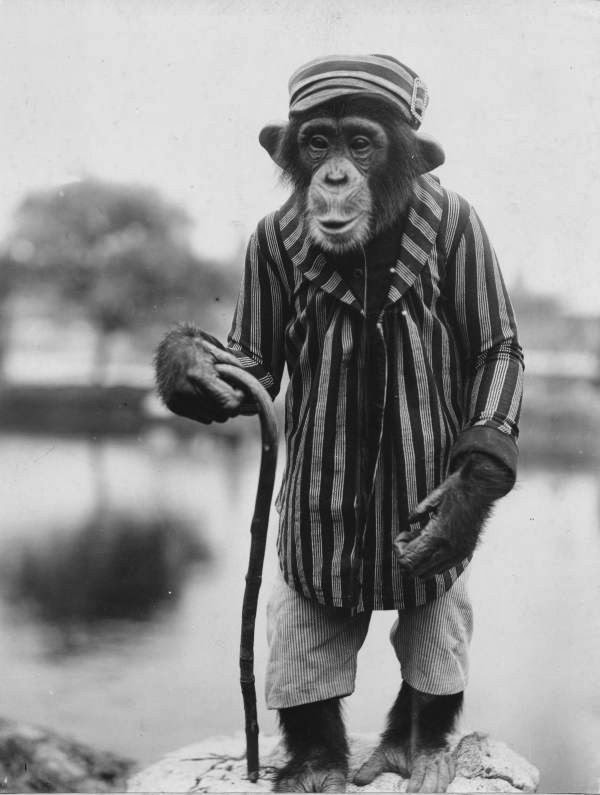 By popular request, may we present one of the heroes of Belle Vue Zoological Gardens, the much-loved Consul the Chimp. Consul, who was often dressed in a cap and jacket and seen smoking a pipe or riding a bicycle, was actually two chimps, Consul the First and Consul the Second. The first Consul died rather soon after arriving at Belle Vue, perhaps due a combination of his pipe-smoking habit, too much beer, and his chocolate addiction (he quickly worked out how to operate the chocolate machine opposite his cage). His intelligence and ability to entertain caught the imaginations of all who visited the zoo, and he became a poster-boy for Belle Vue, drawing thousands of visitors to watch his antics. 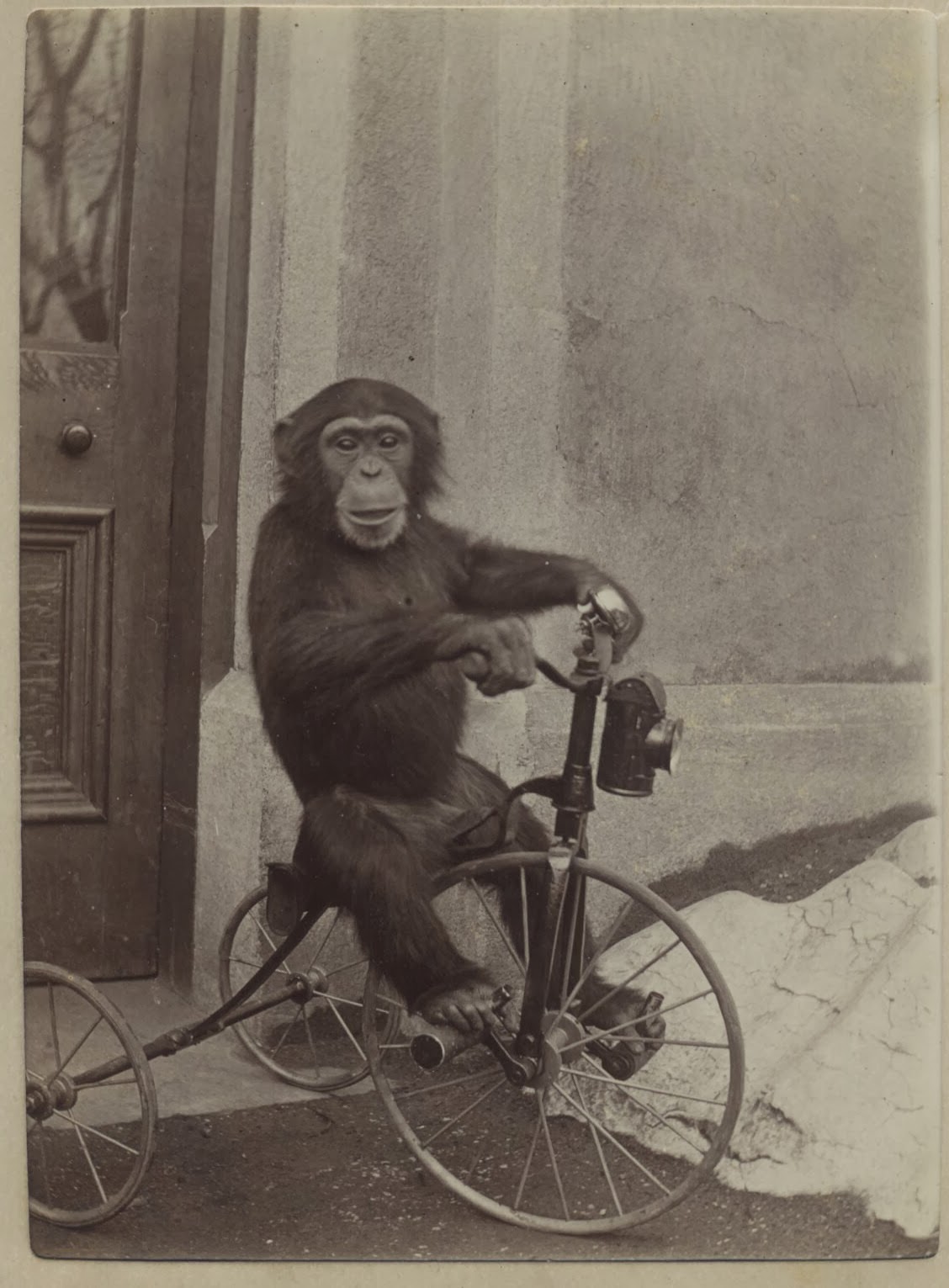 Both Consuls became particular favourites of James Jennison, and they would often accompany him to board meetings and even on trips to the country. This reminiscence by George Jennison is taken from his memoir The making and growth of the famous Zoological Gardens, Belle Vue, Manchester, and the history of its competitors: a century of Lancashire open-air amusements 1825-1925*:

Consul the first was probably the more intelligent of the two, but lacked the striking bicycle and tricycle riding of the other. There was a chocolate machine opposite its cage which it worked without instruction. It could find the proper key from a bunch, open the door and come out, and very likely made keys of its own, for it was found on more than one occasion outside the monkey house at night, and no one knew how it got there.

Mr Jennison took it out continually. Consul knew the treat in store, and would pop into the carrying box and close the door for the journey to the hotel, but always fought hard to avoid the return journey. The piano was a source of great interest, whether played properly or banged by itself. Pictures gave great pleasure but one of a monkey caused fits of ungovernable rage. These household visits were varied by trips to the country. Mr Jennison had farms at Tideswell; the railway journey was full of interest, the ride in the waggonette was equally attractive, and it dearly loved the scamper along the fields and over the stone wall.

The death of the first Consul provoked a great sadness, and led to the publication of the memorial booklet shown below, sold for a penny. The Lancashire dialect poet Ben Brierley was inspired to write this elegy to the much-loved chimp:

‘Hadst thou a soul?’ I’ve pondered o’er thy fate
Full many a time: Yet cannot truly state
The result of my ponderings. Thou hadst ways
In many things like ours. Then who says
Thou’rt not immortal? That no mortal knows,
Not e’en the wisest – he can but suppose.

’Tis God alone knows where the ‘Missing Link’
Is hidden from our sight; but, on the brink
Of that Eternal line where we must part
For ever, sundering heart from heart,
The truth shall be revealed: but not till then –
The curtain, raised by the Almighty, when
Mankind must answer for the deeds of men. 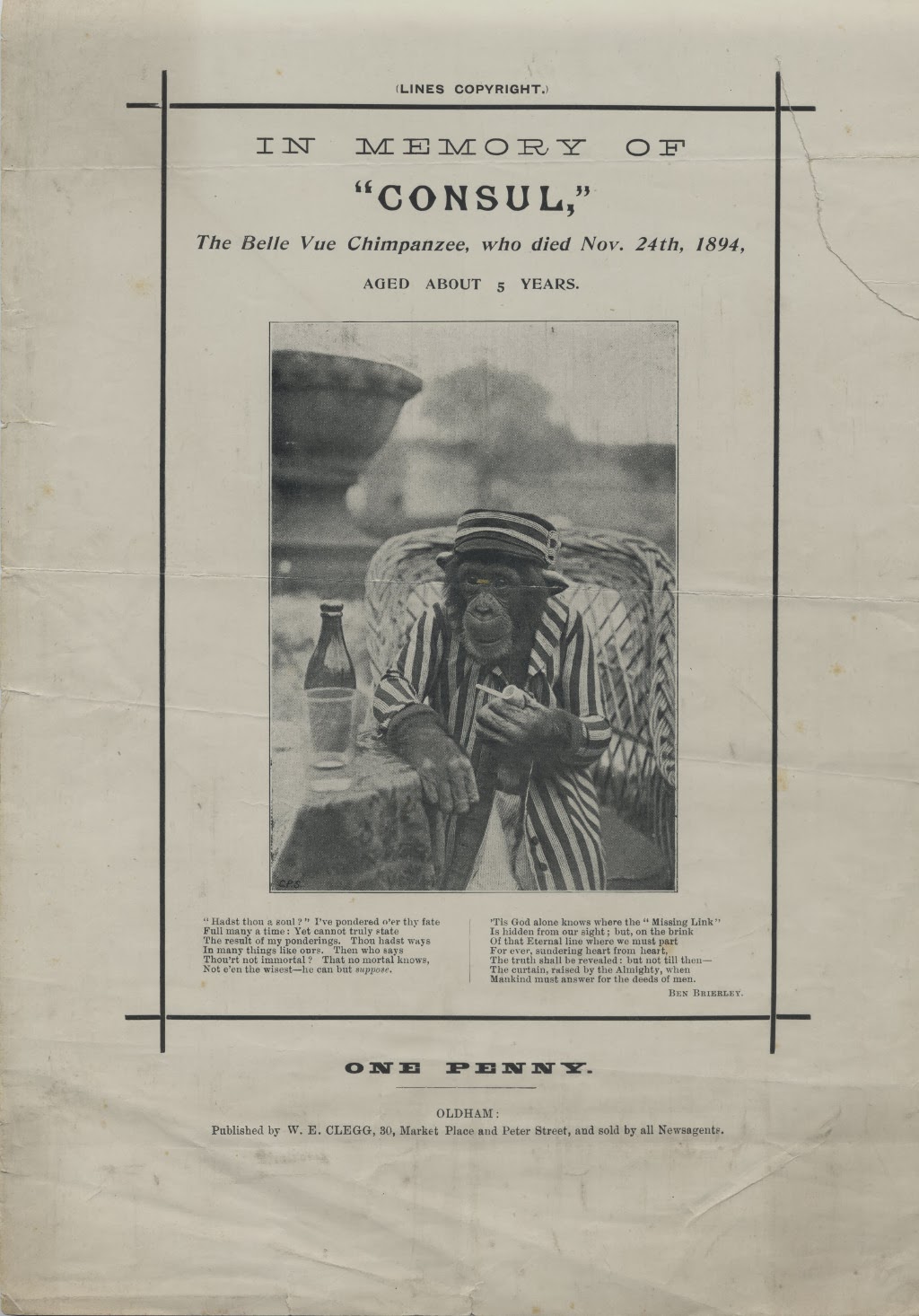 This anthropomorphisation of a chimpanzee would no doubt be frowned upon today, but there is not doubt that Consul brought huge entertainment to thousands of visitors to Belle Vue, and is still much beloved today.

*Soon to be published as an ebook by Zoe Willock