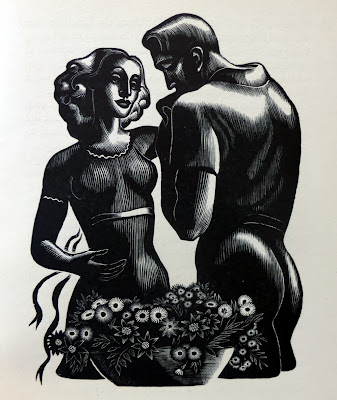 Whilst browsing through the Pickles Collection* recently, we came across a small book called Mr Chambers and Persephone. Written by Christopher Whitfield, it was published in 1937 by the Golden Cockerel Press and tells the story of a young man who embarks upon a brief, passionate affair with a mysterious girl whom he meets at the vicar’s tennis party but who then disappears, leaving him broken hearted. However, this mildly titillating romantic tale is transformed by the stunning, sensuous black and white wood engravings by Dorothea Braby.

We were keen to discover more about the artist but, although she was responsible for illustrating a number of other books for Golden Cockerel, we could find very little information about her. Eventually some detective work in the library of Manchester Metropolitan University Special Collections revealed the background to the book.

Christopher Sandford notes in Chanticleer (the first of the Golden Cockerel bibliographies):

When we received the manuscript of this book we all felt that it was one of the most enchanting love-stories of its kind we had ever read: it had freshness, sensibility, imagination and emotion. It did not matter to us that the author’s name was unknown to the general public….we were also fulfilling what we conceived to be one of our functions, to introduce young and lesser known artists to our patrons. For this book we chose Dorothea Braby to interpret the elusive quality of Mr Whitfield’s lovely fantasy… 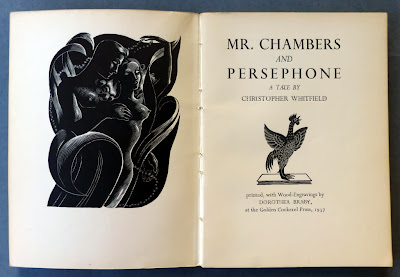 Christopher Whitfield was a very wealthy young man and part of the ‘country set’, but had serious literary ambitions, so when Golden Cockerel suggested they would publish his book as a cost-sharing arrangement in return for higher royalties on eventual sales, he was happy to agree to it. One hundred and fifty copies of the limited edition were published at 30 shillings each, with the unlimited soft cover edition (of which the Library copy is an example) priced at 8s 6d.

When the book appeared, H.E.Bates described it in his review as a ‘small masterpiece’ but warned that the ‘novella’ format would not sell well, and sadly this proved to be the case, as the partners found their store room ‘filled with unsold volumes with further copies in sheets at the printers’

Despite this, Dorothea went on to become one of Sandford’s favourite illustrators, as she was willing to vary her style to suit different projects, worked hard, and was not temperamental. She is described in an article in The Studio from January 1947:

Dark and beautiful, Miss Braby might seem at first to have been destined to sit as a model to artists rather than practise the arts herself. Her restless energy and creative fire would, however, render this impossible.

Strangely, after the early 1950s Dorothea herself seemed to disappear and we wondered what had become of her, until a couple of weeks ago we found the answer in a letter to the Radio Times which began ‘I was delighted to see the Radio Times covers for the 1930’s. Dorothea Braby was my mother and she was heavily pregnant with me when she drew the Talks Number cover from 1934… she was a single mother and her work for the Radio Times was very welcome since it kept the wolf from the door during those years…’ The writer, Penelope Woolfitt, goes on to say that her mother retrained and went into social work in the 1960s but continued to design delightful birthday and Christmas cards for friends and family until her death in 1987. 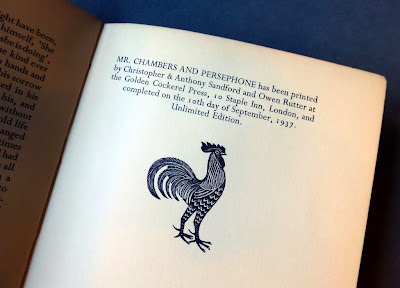 * The collection of Adrian Pickles donated by his wife Anne