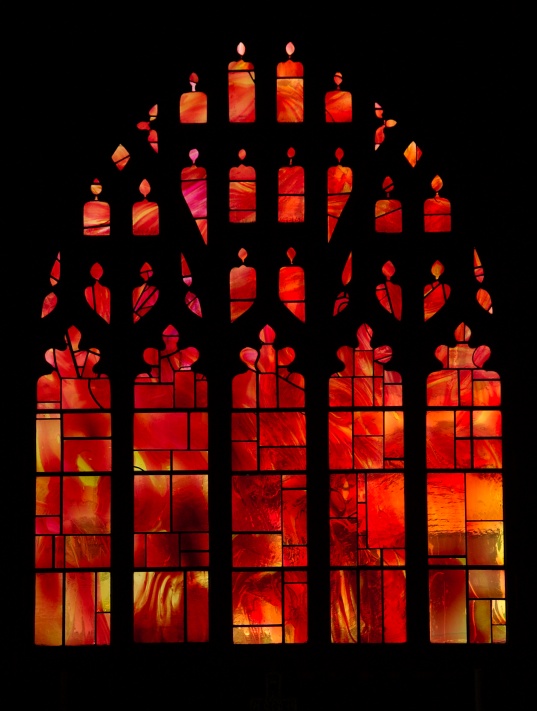 We’re delighted to be able to report the launch of the new history of Manchester Cathedral, dedicated to our late colleague and friend Michael Powell, Librarian of Chetham’s. The work has been a long time in coming, as many hands were involved, but the end result is the only thoroughgoing  history of the church since the nineteenth century, and will be the standard work for many decades to come. The buildings Chetham’s now occupies owe their existence to their being built to house the clergy of the newly founded Collegiate Church in the 1420s, and the links with our nearest neighbour are thus more than close. Our guest blog writer continues:

Books produced to catch the ringing of anniversary bells are often slight affairs; this is not the case with Manchester Cathedral. A History of the Collegiate Church and Cathedral 1421 to the present. It is a closely researched multi-authored volume published to mark the 600th anniversary of one of the city’s defining institutions. 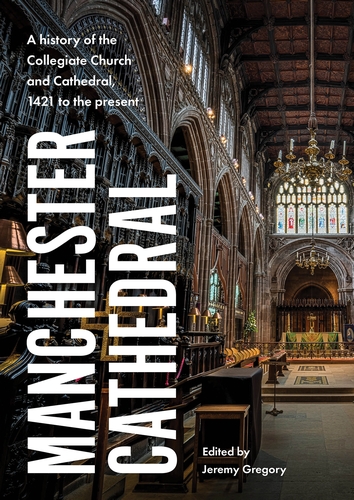 It can be divided into two parts. The first opens with an introduction by the editor Jeremy Gregory in which he traces the published historical writings about the church. This literature is surprisingly slight and it is clear that in many respects historians of Manchester know a great deal more about the city’s railway stations and commercial buildings than about what became affectionately known as Th’ Owd Church. 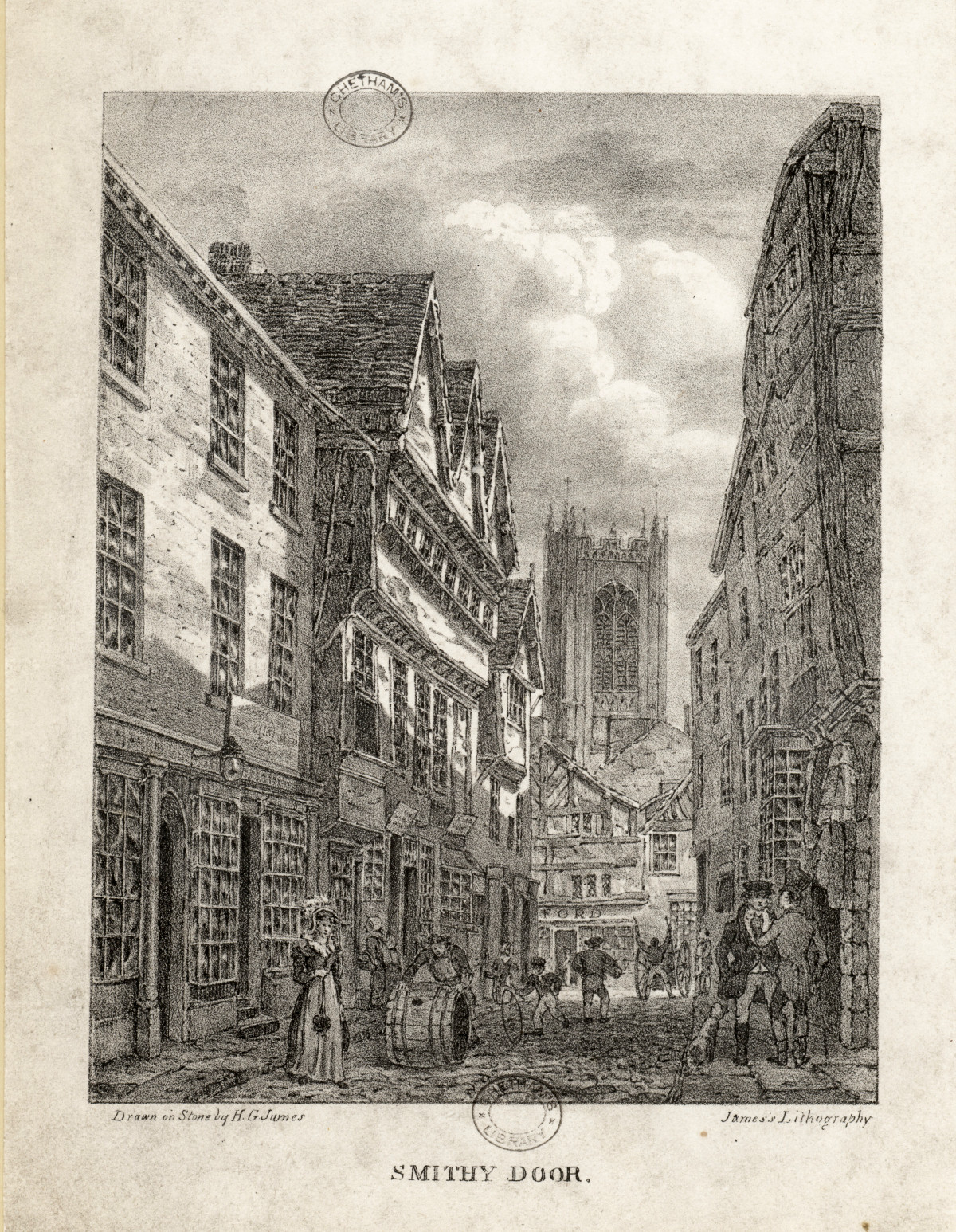 James lithograph of a drawing by John Ralston, the Collegiate Church tower from Smithy Door, 1820s

This is followed by seven further chapters spanning the history of the church to the present day:

Importantly, although the title suggests that the church is 600 years old, there was a church serving the medieval parish of Manchester. One of the virtues of these necessarily concise chapters is that the contributors are able to place the church in broader social, cultural and political contexts, indicating connections to the wider history of the parish, town, city and diocese that are almost entirely absent in the work of earlier historians. 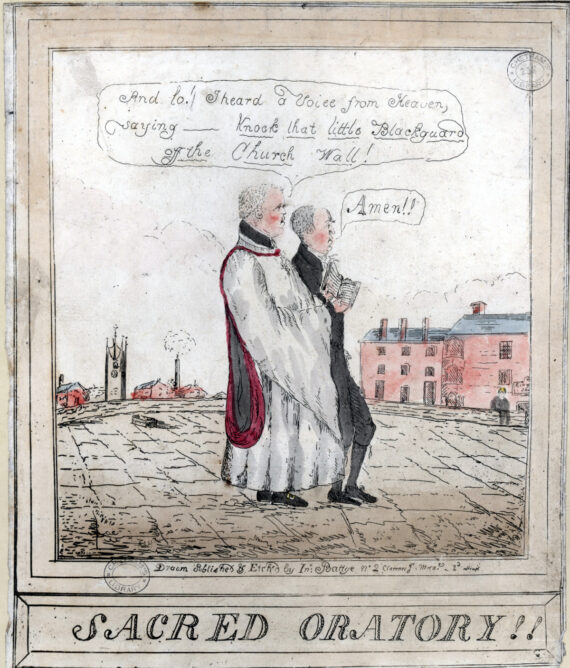 Engraving of Joshua Brookes (satirised here as ‘Martext’) interrupting a biblical reading to shout at a boy sitting on the church wall.

These chapters begin with a clear account of the complex history of its architecture. It was a building that was ‘knocked about a bit’ but continued to be recognisable. Enjoying it today one is especially grateful that late Victorian plans for a new cathedral were never realised. The Cathedral lost its windows in the December blitz but there is an illuminating account of the modern glass, not least Antony Holloway’s exceptional compositions.

Fortunately the sixteenth-century misericords escaped the Luftwaffe – some had been damaged when religious ideologies clashed in earlier centuries – and the chapter detailing these carvings is a reminder of why Manchester was and remains on the list of cathedral hunters. All of these chapters are supported with carefully chosen, high quality illustrations. 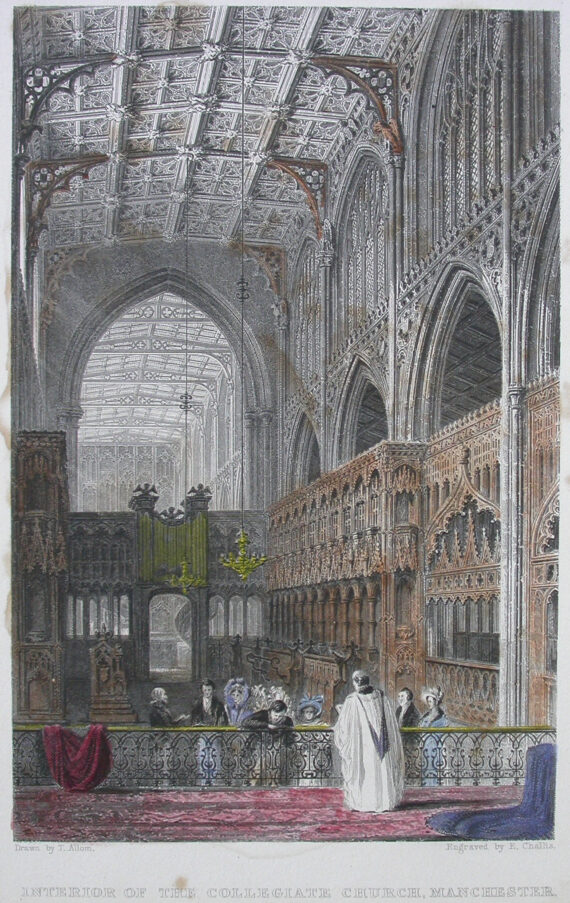 An engraving of a wedding being celebrated at the high altar.

The book is dedicated to Michael Powell of Chetham’s Library, who worked on the volume from its beginning but did not live to see it completed. He had an extraordinary knowledge of the history and changing meanings of the building and no doubt would have seen this volume not as the definitive account but rather as one that ignited further research into other aspects of this remarkable church.

Jeremy Gregory, ed., Manchester Cathedral. A History of the Collegiate Church and Cathedral 1421 to the present, Manchester university press, 2021, xx and 472 pp, £30.00