Novel Experiences of Horses’ Heads – the Origins of the Palatine Building 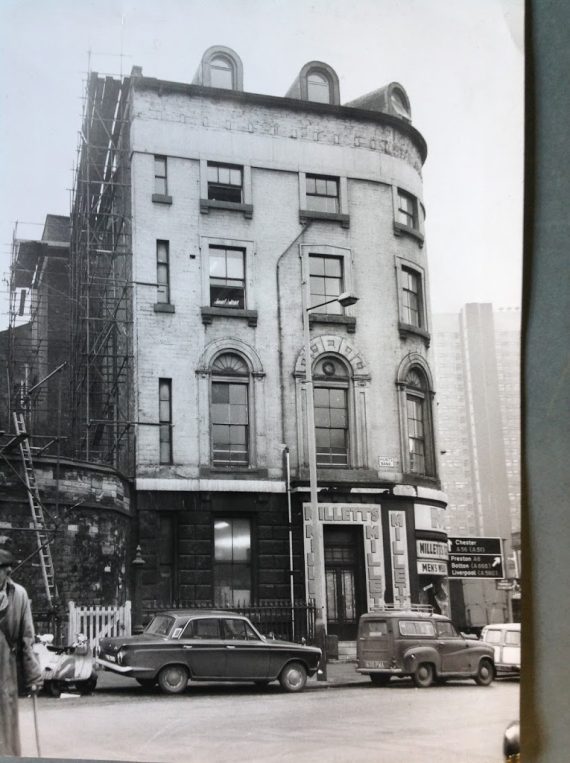 The Palatine Building demolition continues apace. It won’t be long until it’s gone and many more Mancunians will be treated to a view of our smiley faces waving to them from the windows of the lovely medieval buildings. Now seems an appropriate time to look at the origins of the building. Below is an excerpt from 1908’s Manchester Streets and Manchester Men by T. Swindell…

“The next change to be noted took place in 1842, when the pile now known as Palatine Hotel and Buildings were erected. They were evidently put up in anticipation of the demand for hotel accommodation that would follow the projected extension of the Manchester and Leeds Railway line from Collyhurst to Hunt’s Bank. The speculator was Robert Gill of Mansfield Woodhouse, Notts, who was the manager of the railway company. Over the shops were a number of stables, and the top storey was intended to serve the purposes of a riding school. The approach to the stables and school was by means of an inclined slope to which there was a doorway next to the gateway of the Chetham College. It was a novel experience to see a horse’s head thrust through a window on the third floor, but such an experience was by no means rare. The venture paid for a while, but after the novelty had worn off patronage fell away, and about fifty years ago the stables and school were altered into sitting and bed rooms and added to the hotel.” Current view of the site

Unfortunately, we don’t have any pictures of said horse heads poking out of windows, although the demolition team have said that, if you listen quietly, you can hear faint neighing and a distant clip clop…