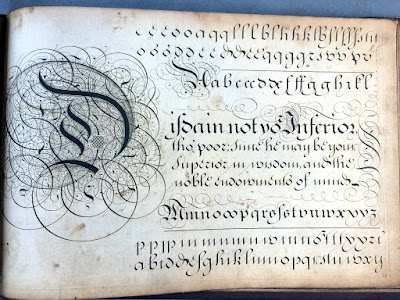 These beautiful flourishes and embellishments are examples of fine penmanship from a copybook published by George Shelley in 1714, The second part of Natural writing: containing the breakes of letters and their dependance on each other likewise various forms of business written in the most proper hands…

Shelley achieved fame as a ‘writing master’ in seventeenth-century London, where he started out as a private tutor, teaching penmanship to the children of the gentry, including the Archbishop of Canterbury. He then opened his own school at the appropriately named ‘Hand and Pen’ in Warwick Lane and ultimately gained the prestigious post of writing master to Christ’s Hospital. 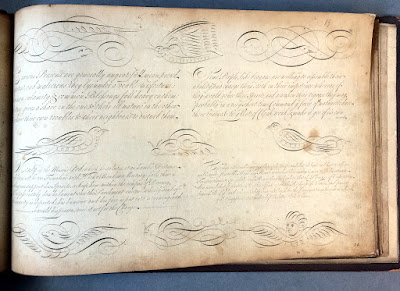 By the seventeenth century there was a huge demand for clerks, both in trade and commerce, and in the legal profession and government departments, which led to a proliferation of self-proclaimed ‘writing masters’, all hoping to benefit financially both from teaching aspiring clerks and from publishing copybooks.

Essentially these books provided examples of lettering and phrases which were then copied out by students, sometimes by tracing, sometimes freehand, to improve their style and efficiency. Some of the books even included instructions for cutting quills and making ink (quill pens were still widely used until the beginning of the nineteenth century). The development of copperplate engraving had enabled the production of high-quality printed copybooks which sold in their thousands and were very profitable for their authors. 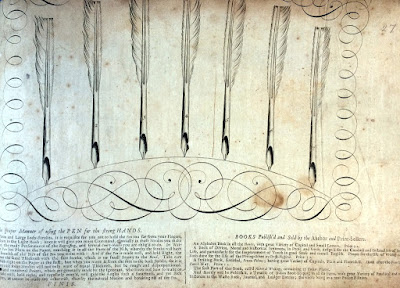 The requirements of business for both speed and a consistent and universally legible ‘hand’, led to competition between the various writing masters to develop a suitable style. This resulted in a great deal of rivalry and some very bitter and public altercations between them, conducted via newspapers and in the prefaces to their published copybooks.

Shelley was one of the chief protagonists in a particularly vicious battle which also involved  Charles Snell and John Clark. Clark was a notoriously contentious individual, who favoured a simple, clear and standardised ‘round hand’ for business use and was highly critical of those masters who advocated an overly decorative style of ‘owls, apes and monsters, and sprigg’d letters’ 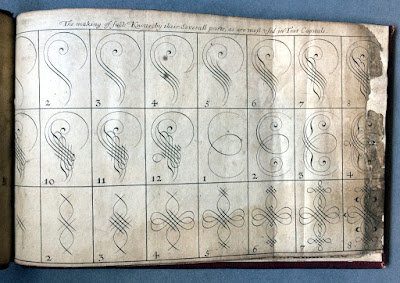 The library has several examples of copy books, the earliest, published in 1664, being The young clerk’s president: a copy book containing examples of all hands proper to clerk-ship and directions peculiar to all those hands with diagrams for the making of knots, written and engraved by Edward Cocker. 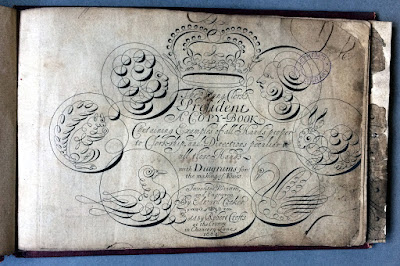 Although Cocker declares that his little book is ‘furnished with examples in writing applicable to all manner of imployments’, his emphasis on ‘engrossing hand’, ‘court’, ‘small court hand’, ‘running court hand’, and ‘chancery’ indicate that clearly aimed the book at ‘such persons as are designed for the Law’.

For so many of us now, the keyboard has almost completely replaced pen and paper, and there has been much debate about the disappearance of handwriting and whether it matters. Does it affect us culturally, socially, emotionally? Studies have shown that learning to write by hand changes the way we learn to read, and that note-taking with a pen, rather than a laptop, gives students a better grasp of the subject. 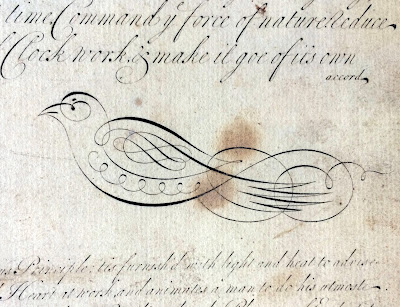 There is a sense that handwriting conveys individuality to a document, and a handwritten text crossed out or corrected, with bits scribbled in the margin and later additions there for good, leaves a visual and tactile record of the writer’s work and the stages it has passed through, which is prized by scholars.

For those of us of a certain age, handwriting can almost be a part of our identity – a pensioner’s party trick which amazes (and irritates) young people is to skim through a pile of Christmas card envelopes and without even opening them declare: ‘Aunty Nellie, Sue and Pat, Gillian, your Mum and Dad’, and so on. Of course the very concept of handwritten Christmas cards is old fashioned these days: no more festive greetings bearing ‘sprigg’d letters’ when we can now email animated singing robins to our friends. 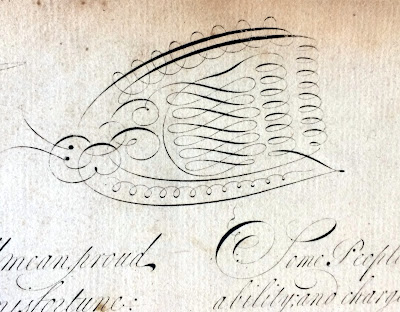 Thanks once again to our volunteer Patti Collins for researching and writing this blog post.