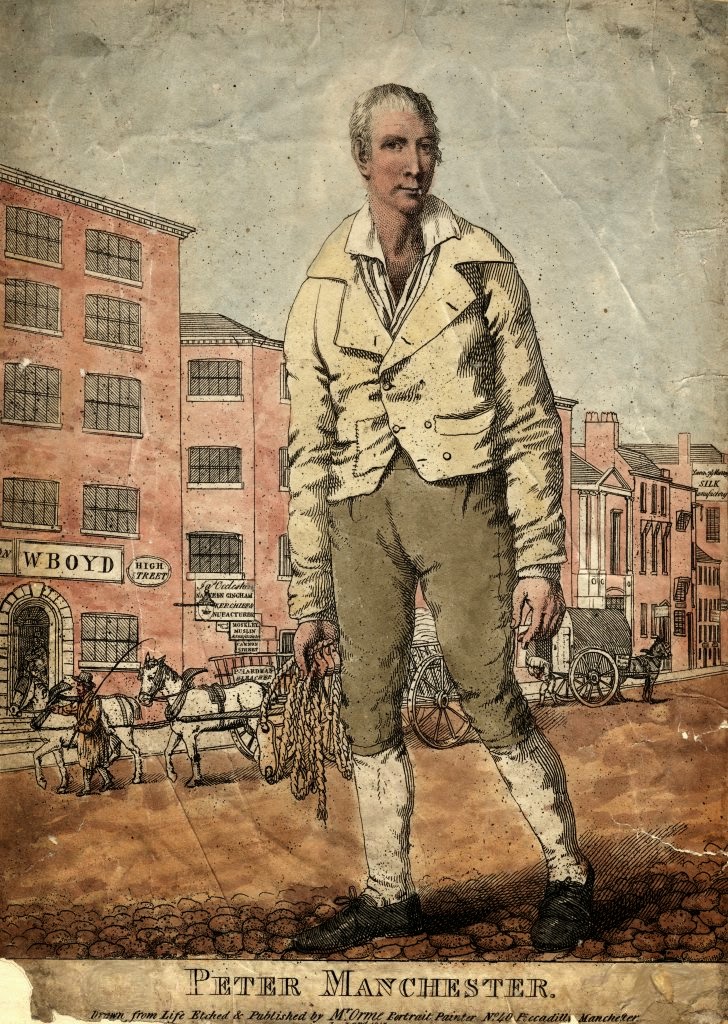 Tomorrow is the anniversary of the Peterloo Massacre, which took place on August 16th 1819. This image of ‘Peter Manchester’ is one of the more unusual and interesting images of the period. It is apparently dated 1815, thus predating the events at Peter’s Fields, and this appears to be confirmed by Thomas Swindells in his Manchester Streets and Manchester Men of 1907. Why this sympathetic and dignified portrait of an archetypal working man with his noble features and almost aristocratic bearing should have been given the title of ‘Peter Manchester’ before the name Peterloo became synonymous with the struggle for the rights of working people is a mystery.

In the hand-coloured engraving by Daniel Orme, portrait painter of Piccadilly, Peter Manchester stands upright, facing the onlooker in a position of strength and vigour, wearing his patched working clothes and carrying a bundle of frayed rope, which may indicate his occupation. He is pictured in front of the elegant Collyhurst sandstone buildings of High Street, near the junction with Cannon Street, close to where the current entrance to the Arndale Market may be found.

Regardless of the date of the image, this empowering and affecting portrait nevertheless powerfully conveys something of the dignified struggle of the working classes to achieve their emancipation and basic human liberties which the authorities so cruelly attempted to thwart on that notorious day 195 years ago.