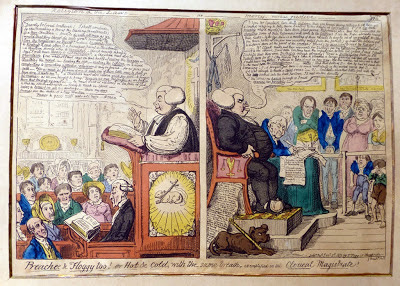 One of our most recent acquisitions relates directly to the Peterloo Massacre and is a satirical etching by George Cruikshank entitled ‘Preachee and Floggy too! Or hot & cold, with the same breath-exemplified in the clerical magistrate!’ The hand-coloured etching, published in December 1819, comments on the behaviour of clerical magistrates, and in particular one Charles Wicksted Ethelston, who was responsible for the reading of the Riot Act at the gathering at St Peter’s Fields on 16 Aug 1819.

At the New Bailey Sessions, on 23 September, he is reported to have said to a man charged with assault: ‘I believe that you are a downright blackguard Reformer. Some of you Reformers ought to be hanged; and some of you are sure to be hanged—the rope is already round your necks’.

In nineteenth-century Manchester, magistrates played a significant part in law enforcement, and were given the power to call upon the militia to deal with perceived social unrest. Magistrates came from established landowning families and were known for their intolerance of reform. A number of magistrates were clergy, including Ethelston. Cruikshank’s etching portrays him delivering a sermon at the Collegiate Church on the left hand side, and sitting in his magistrate’s chair on the right.