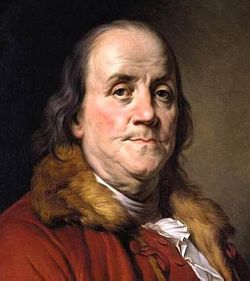 Many are aware that Karl Marx and Friedrich Engels spent time studying together at Chetham’s, but they are by no means the only radical political theorists to have paid a visit to the Library, nor the first.

In his Completed Biography Volume Two: 1757-1790, the Founding Father of the United States Benjamin Franklin describes a visit he made to Chetham’s in the early summer of 1771:

In May, I made with friends a journey of a fortnight to Manchester, Sheffield, Leeds and Birmingham, and return’d in time to be at Court on the King’s birthday. My journey was of use to my health, the air and exercise giving me fresh spirits. In Manchester, we visited a school for poor boys and admired its old and well stocked library.

Franklin had another Manchester connection, being a frequent correspondent with the medic Thomas Percival, the founder of the Manchester Literary and Philosophical Society. Percival made a study of the population of Manchester, producing the first accurate census of the town in 1773-4. Using sextons’ registers from Manchester Collegiate Church in which age and cause of death is recorded, Percival carried out a series of demographic studies of the town. Franklin was an admirer of Percival’s work, and commented favourably on his research in a letter to him.