Sad songs say so much 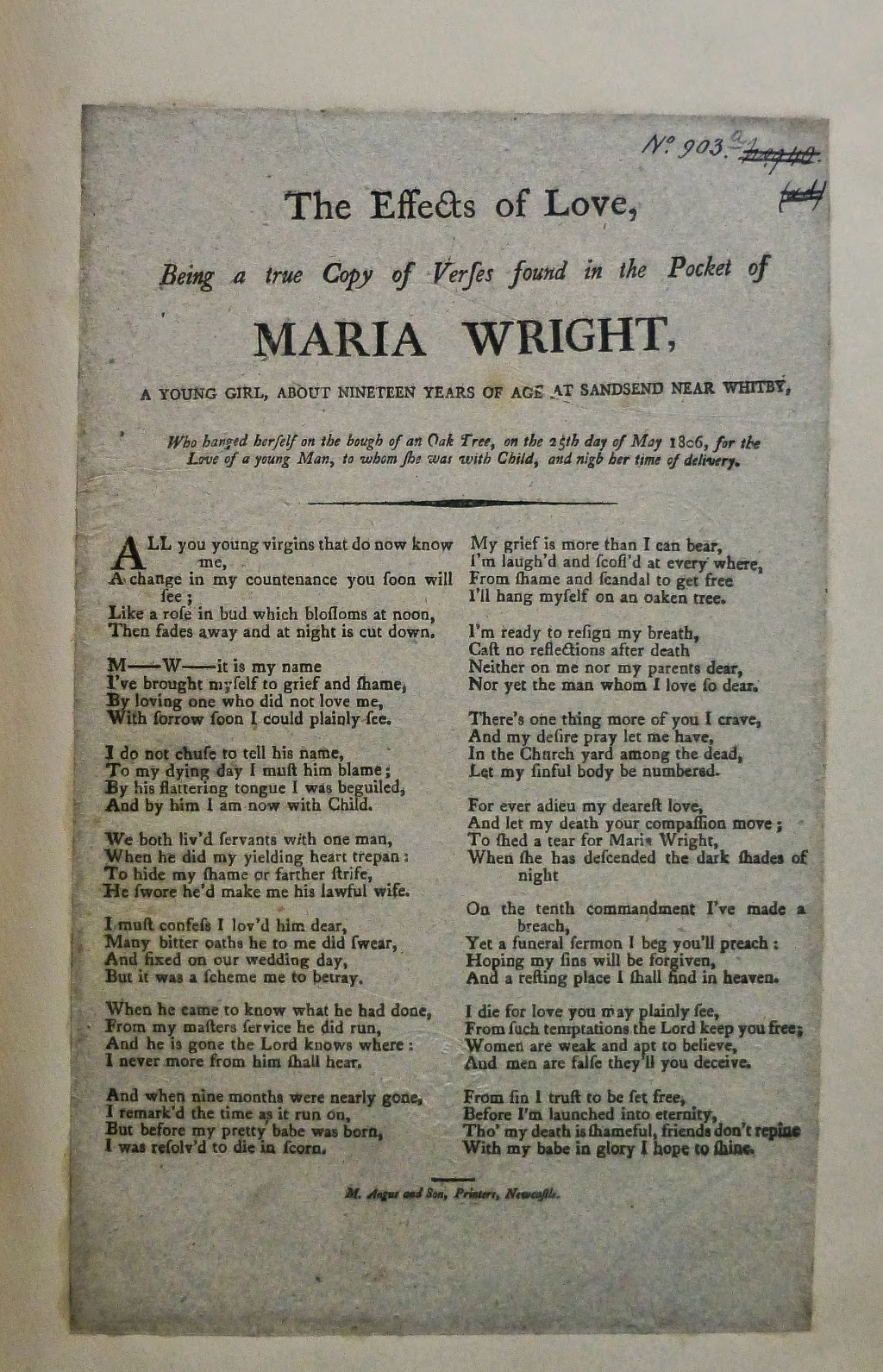 Although it’s fair to say that most Victorian comic songs remain completely baffling and unfunny to modern ears, sad songs from the nineteenth century often retain a strong emotional pull. This wonderful ballad, with a splendid title that does exactly what it says on the tin and explains the entire song, was printed by the Newcastle firm of Margaret Angus and Sons, probably in 1806.

The ballad relates a familiar story of the seduction of a servant girl named Maria Wright, her unfortunate pregnancy and subsequent abandonment by the lover who had promised marriage and a life together. In deep despair and at eight months pregnant, Maria hanged herself on an oak tree on 25 May 1806, killing herself and her unborn child.

Whilst ballads about suicide are far less common than ballads about murder, they are both commonly used as moral propaganda, in the same sort of way that today’s right wing tabloid press publish stories in an attempt to alarm and subliminally control their readership. Many murder ballads were alleged to have been written by the condemned men themselves, usually the night before the execution, and ‘found’ the next morning when the jailer came to bring the condemned criminal to the scaffold. Maria Wright’s ‘confession’ was put down on paper just before her death and then found in her pocket by the person who discovered her body. As with murder ballads, the verses include a warning to other young women not to follow Maria but to stay virtuous: ‘From such temptations the Lord keep you free’.

Of course, this ballad was not written by a Maria Wright who died on 25 May 1806, and it’s possible that Maria Wright didn’t actually exist at all. This tale of seduction and abandonment is a universal one and the wonderful Bodleian ballads collection has over a dozen songs with the title ‘The effects of love’, all songs about servant girls duped into having sex only to be abandoned when they became pregnant. The ballad of Maria Wright is of interest in another respect, that this is no ‘Gosford Park’ tale of a master seducing his servant: Maria was seduced by her social equal, a fellow servant, proof perhaps of the ‘truth’ still promoted by the tabloids two centuries later, that all men are dangerous and no woman is safe. Or as Maria would have it: ‘Women are weak and apt to believe/and men are false they’ll you deceive’.