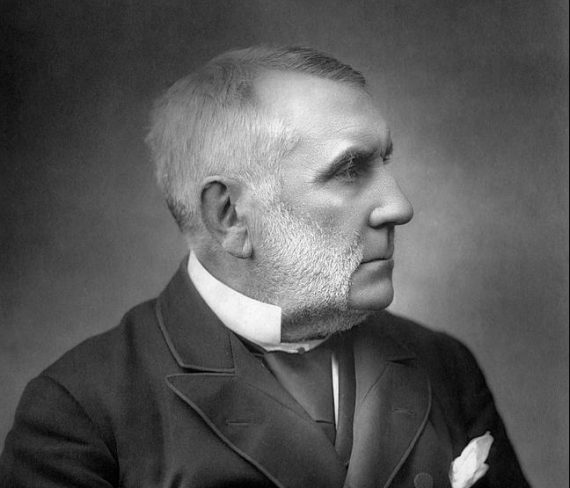 Geoff Scargill is one of our invaluable Library volunteers, who was previously a long-serving staff member at Chetham’s School of Music. Geoff is a devoted fan of Sir Edward Watkin, the unsung hero of railway engineering, who played a part in a number of momentous historical events in history, but remains relatively unheard of.

As Chairman of the Friends of Rose Hill and author of “Nimble Ned – The amazing story of Edward Watkin, Manchester’s forgotten star”, Geoff seeks to draw wider attention to the accomplishments of Sir Edward. He has recently curated a beautiful display in the Library, using documents and books from our collection.

Sir Edward Watkin MP (1819 – 1901) was a Railway King. Born on 26th September 1819, he lived and died in Manchester. Newspaper obituaries appeared throughout the world, including The New York Times and the Sydney Herald but today Watkin is virtually forgotten. Locally: From 1843 to 1846 he organised Saturday half day closing for Manchester businesses, campaigned for the first Parks for the People in Salford and Manchester and founded The Manchester Examiner newspaper. “Cries of London” – Owned by Watkin as a child, displayed hopes for a better age when children will not be employed as chimney sweeps.

Nationally: In 1839 he organised an Anti-Corn Law campaign amongst factory and cotton mill workers. In 1867 he was one of 78 MP’s who tried to give women the vote. His Great Central Railway, opened in 1899, ran from Manchester to Marylebone in London. He developed Grimsby into the biggest fishing port in the world and created a holiday resort next to it, Cleethorpes. The foundations of his ‘Eiffel Tower’ at Wembley are still under the pitch.

Internationally: He wanted to transform Ireland’s economy with a tunnel to Scotland. In 1880 he dug two miles of a Channel Tunnel before the government stopped him. He transformed the bankrupt Grand Trunk Railway of Canada into the start of the Canadian Pacific Railway, while being involved in the negotiations that led to the creation of Canada. In 1887 he said: “While Europe is becoming more and more one country by the breaking down of old fashioned ideas of exclusion we, in England, are becoming more and more isolated.” “In the calm beauty of the Welsh Alps he found a home after his own desires, and in the quietude of the still pretty Manchester suburb, quiet yet within the sound of the boom of the Big Ben of the Manchester Town Hall, he fought his last fight.”