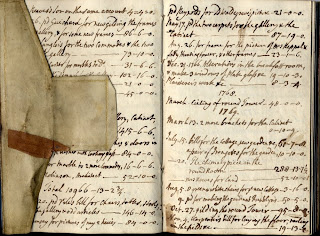 The recent exhibition at the V&A, Horace Walpole and Strawberry Hill, reminds us that one of the Library’s most important manuscripts is concerned with the building of Walpole’s magnificent house in Twickenham, Surrey. The modest 17th-century house was transformed by Horace Walpole (1717–97), youngest son of Sir Robert Walpole, Britain’s first Prime Minister, into what he called ‘a little Gothic Castle’. The house provided an atmospheric setting for Walpole’s unique collections and quickly became a popular tourist attraction. It remains Britain’s finest example of Georgian Gothic Revival architecture.

The manuscript is a set of accounts, written on twenty pages, contained in a vellum-bound pocket book, measuring 15 x 10 cm. Written in Walpole’s hand, the book consists of a continuous record of expenditure on the building and furnishing of the house, and on the layout of the grounds, for nearly fifty years from 1747 to the end of 1795. It covers payments for tradesmen: plasterers, glaziers, bricklayers, joiners and gardeners, as well as expenditure on fittings and furniture. Some items are recorded in detail, such as the Welsh chairs bought at Mr Bateman’s, a yellow bed for the beauty room, and a Blue Indian damask for the Beauclerk closet, whilst others are imprecise – pedestals, new walls, painted glass.

The accounts also record expenditure on Walpole’s printing house which he built in the grounds in 1757. Over £180 was spent on this, the country’s first private press, known as the Officina Arbuteana or Strawberry Hill Press. His first book, an edition of the Odes of Thomas Gray, was brought out in 1757 and a copy of this is also in Chetham’s.

Walpole described himself as a woeful mathematician, and his accounts are full of faults and miscalculations. Even simple sums such as the addition of 75 and 50 or the subtraction of 125 from 750 had to be written down. The grand total spent on Strawberry Hill was £21,410, a figure which differs by over a thousand pounds from that recorded in Walpole’s accounts.

After Walpole’s death, the house passed to his cousin’s daughter Anne Daumier, and in 1842 the contents were dispersed in a famous auction that was held over twenty-four days. Now the house is being restored and is expected to open later this year.

The Strawberry Hill accounts were given to Chetham’s in 1924 and were published three years later by the Clarendon Press.