The Chetham coat of arms 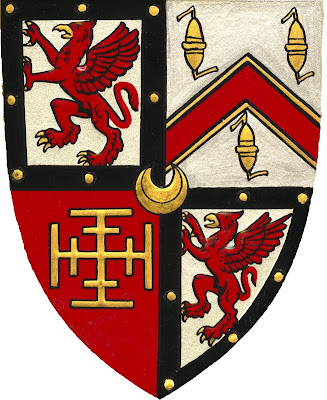 Humphrey Chetham was a member of the Crumpsall branch of the Chetham family, who were minor gentry and were not entitled to bear arms. When he became High Sheriff in 1635, Humphrey Chetham required a coat of arms, which he secured from the Cheshire Herald and genealogist Randle Holme. Unfortunately these turned out to belong to another branch of the family, the Chethams of Nuthurst, a minor difficulty which was resolved by the payment of a small fine.

It was at the same time as this that Humphrey Chetham standardised the spelling of his name, deciding on the use of two h’s and one long e. He had previously spelt it in a variety of different ways, as was common in the seventeenth century. After this, all papers and official documents use the modern spelling.

For those interested in heraldry, the Chetham arms are described as follows: ‘Quarterly 1 and 4 argent, a griffin segreant gules, within a bordure, sable, bezantee. 2 Argent a chevron between three cramp-irons, gules. 3 Gules a cross double-crossed, or’.