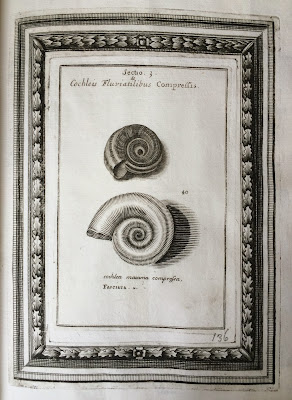 We’ve been looking at some of the library’s early books on conchology (the study of shells) and musing on the art of scientific illustration. In Robert Hooke’s words, a successful illustrator required ‘a sincere hand and a faithful eye’ to provide accurate and detailed images, which were also aesthetically pleasing. Martin Lister, the author of Historiae Conchyliorum, published 1685-1692, took an unusual approach to the provision of illustrations for his book by training his two eldest daughters to draw and engrave all the specimens. 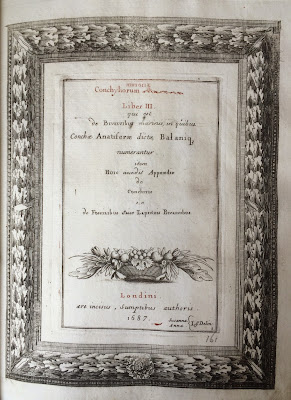 Lister (1639-1712) was a successful physician and naturalist who became vice president of the Royal Society, sometimes deputising for Samuel Pepys. He was part of a group who met together to discuss new developments in ‘natural philosophy’; his particular interests were insects, especially spiders, and rocks, fossils and shells. He became a close friend of the celebrated naturalist John Ray, and of Sir Hans Sloane, the founder of the British Museum, who lent Lister specimens from his travels in Jamaica. Edward Lhwyd, Keeper of the Ashmolean Museum, wrote to Lister,  ‘I have sent by John Bartlet of the White Swan at Holbourn bridge, a small strawberry basket, with a parcel of your curious wrong turned snails of the woods.’The snails were kept alive by being buried in wet moss. 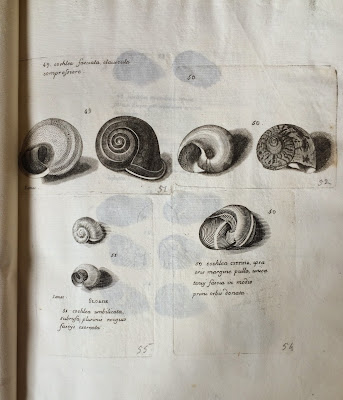 However, Lister had never achieved a medical qualification and was also sensitive to criticism about his area of research, writing to a friend that there were ‘censorious mouthes who think and say a man that writes on Insects can be but a trifler in Phisic’. When he embarked upon his masterwork, the Historiae Conchyliorum, he was determined that the quality of the work, including the illustrations, would secure professional respect from both scientists and wealthy collectors and connoisseurs. Using his daughters as his illustrators gave him ultimate control of the work.
The Bodleian Library has a collection of Lister’s letters, papers, sketchbooks and even the copper plates used to create the Historiae, and it is clear from these that Lister started training the girls from an early age. He wrote to his wife in 1681, ‘I did send home a Box of Colours in oil for Susan and Nancy [Anna] to paint with. As for the pencills sent with them, and the colours in shells, which are for Limning, I would have thee Lock them carefully up, tell I return, for they know nott yet the use of them.’ The girls were then aged eleven and nine.
Lister was very knowledgeable about the process of engraving and illustration and there is also evidence that he and his daughters used microscopes in their work. He seems to have sat with his daughters while they drew the specimens, and he certainly pointed out the features they were to record and made notes against the drawings of shells in their sketchbooks.
By 1692 the book had expanded to 1073 plates of shells, slugs and molluscan anatomy, but there was no actual text, other than sectional headings and specimen names. Possibly because of the relative lack of text, Lister chose not to use moveable type and any text was engraved directly onto the copper plates, alongside the illustrations, which meant that additions and corrections were difficult.
J.D.Woodley describes how their styles differ, most noticeably in the way they represent shadows. ‘Anne (whether painting or engraving) used bold parallel lines of graduated thickness, while Susanna used washes or cross-hatching’ and he quotes R.Davies who remarks that ‘The plates are executed with great fidelity and spirit, and bear testimony to the extraordinary talents and industry of the artists’. 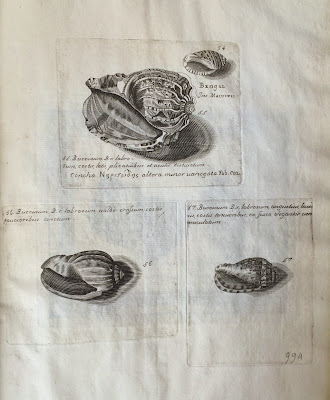 It is possible that Lister avoided having to work with (and pay) a printer by installing a press in his own home, he certainly chose to print the book on the same, very thin, watermarked paper which he used for his own correspondence. Many of Susanna and Anne’s designs incorporated distinctive,decorative borders which meant running the sheets through the press twice and this put the thin paper under such strain that it sometimes tore and had to be patched. Our copy of the book contains an example of just such a repair to the image of ‘cochlia trium orbium’. 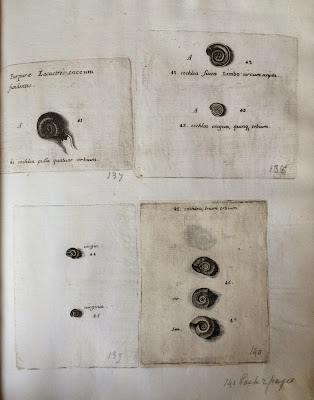 The paper is so thin that beautiful, silvery grey ‘ghost images’ of the shells appear on the reverse of many leaves. 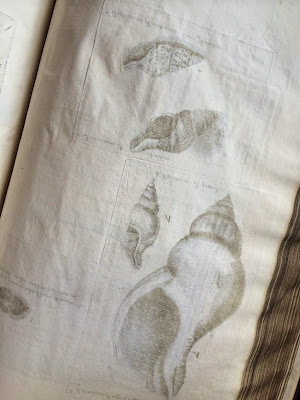 Historiae conchyliorum became the bible for conchologists for over a hundred years, and although ‘Susanna and Anna Lister’ are recorded on the title page, their subsequent fate remains something of a mystery. No further work has been recorded for either of them and, although we know that Susanna married, had a daughter and died in 1738, there is no further trace of Anna at all.
The sisters seem to have worked on the book for over ten years –in 1692 Edward Lhwyd wrote to Lister, ‘I do not wonder your workw[omen] begin to be tired, you have held them so long to it’. One has to wonder if they were willing and enthusiastic participants, if they had any choice in undertaking the work and indeed, if they ever received any payment from their father. Perhaps in the end, when the final version of the Historiae was published, they were simply relieved to return to normal life and anonymous domesticity!