‘The drollest concern I think I ever met with’ 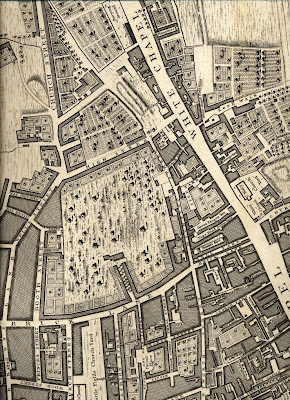 This image from John Rocque’s 1746 Plan of the cities of London and Westminster shows the church of St Mary’s Whitechapel, where in 1817 John Leech was a guest at a rather unconventional marriage service. He describes the humorous proceedings in a letter to his brother Thomas:

“I went to the wedding of James Tebbut; he was married at White Chapel Church. My wife & an acquaintance of J.T.s were there and afterwards all went to the fair. It was the drollest concern I think I ever met with. When he was asked by the Parson if he would have Kitty for his wedded wife he answered in very loud terms, ‘Yes I will’. He was then asked if he would take her for better or for worse his answer was he would take her for better but not for worse. She was afterwards asked similar questions and on coming to the word obey (owing I suppose to his behaviour), she faltered in speech. Jim said, ‘Say obey Kitty, why not say obey?’, & many other ridiculous things which ultimately caused the Parson to reprimand him in strong terms, only for J.T. to tell him to go on with his business. After the ceremony was over the Revd Divine gave him his blessing but Jim told him he might keep it for himself for he did not want it. It was all of a piece throughout the day.”

Rocque’s beautiful engraved map of London was the first detailed large-scale plan of the city to be published. There are twenty-four sheets showing the city at a scale of 26 inches to the mile, which when laid edge to edge measure an impressive 13′ x 6.75′.

You can find out more about Thomas Leech at our current exhibition of material from the Leech family archive during normal Library opening hours.