The Gestures of Hogarth 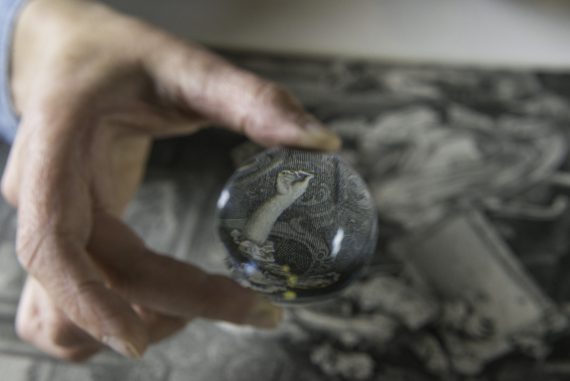 Among the works in the collection that inspired and influenced Brass Art’s commission ‘Gestured’ were some of the engravings and etchings of William Hogarth (1697-1764). The Library’s Hogarth collection consists of over 200 items, and includes many of his best-known works, and also a number of early works undertaken as book illustrations. For the most part the prints are good early impressions, taken during Hogarth’s life and thus subject to his artistic control. The prints include, among others, complete sets of the key works of the Hogarth canon – ‘An Election Entertainment’ (1758), ‘Marriage A-la-Mode’ (1745), ‘A Rake’s Progress’ (1735), ‘A Harlot’s Progress’ (1732), ‘The Four Times of the Day’ (1738), ‘Beer Street, Gin Lane’ (1751), ‘Stages of Cruelty’ (1751), and ‘Industry and Idleness’ (1747).

The Library bought a set of over 200 works by Hogarth at Vernon’s Auction in Manchester in November 1795 for the sum of £26.15.6, along with other assorted prints. Caring for the loose prints obviously presented a problem, and some twenty years later Library staff bought a large empty portfolio at the sale of Manchester art collector John Leigh Philips and mounted the prints in a somewhat bizarre order, separating some of the most important sets such as the Rake’s and Harlot’s Progress. One of the striking things about the Hogarth prints is the way that he uses hand gestures: to caress, scold, warn, punch, as well as to hold objects of value. Nowhere is this better seen than in the first plate of ‘A Harlot’s Progress’. At the centre of the image, Mother Needham, the brothel keeper, touches Moll’s face. The gesture at first looks like a gentle caress, as a mother would give to a child, but it has a more sinister purpose: the procuress is examining Moll’s youth and beauty, checking out her suitability as a sex worker. To the left the clergyman on horseback holds in his hand a pastoral letter, oblivious to what is going on and unaware that his horse is knocking over a set of pails – the eighteenth-century equivalent of texting whilst driving. Behind, Colonel Francis Charteris stands in the shadow of the door leering intensely at the girl, his right hand fumbling suspiciously in his pocket. His servant or pimp holds his hands in almost mock amazement at the prize they have been given. Finally, the life that Moll should face as a domestic servant is shown by the woman hanging out clothes, a life of drudgery, in contrast to the fate that will befall the Harlot. It is not surprising that gesture features so much in Hogarth’s modern moral subjects, which, after all, tell stories without the use of words. In plate two of ‘A Harlot’s Progress’, the merchant holds on to his coffee cup while the Harlot kicks over the coffee table to create a distraction, flicking her fingers to get her servant to allow her lover to escape undetected. In plate three of ‘Marriage A-la-Mode’ the Viscount returns to the quack doctor a box of pills that he has been given to treat his syphilis and that of this young mistress. In the other hand he holds a cane threatening the quack that this time the pills should work. In the final plate the merchant removes the wedding ring from the fingers of his dead daughter. As a victim of suicide she had forfeited all of her rights and possessions and it is fitting that an arranged marriage for status and wealth concluded with the security of property in the form of a ring. An interesting gesture can be seen in plate three of ‘A Harlot’s Progress’. The image is of a shabby room in Drury Lane; the Harlot Moll is rising late, attended by a serving-woman who has lost part of her nose to syphilis; in the background, the magistrate, John Gonson, enters quietly with officers to arrest her and puts his hand to his face. Usually this is seen as Gonson pausing at the erotic sight on view in the room. Depicting Gonson in this way, enjoying what he seeks to destroy, would have appealed to the masses. But the problem is that Gonson’s eye is not fixed on the Harlot but looks behind at the stolen goods littering the room, and suggests an alternative reading. Psychologists know that whenever a person enters a cafe or restaurant to meet friends or a date he or she is likely to touch his or her face or head, signifying the feeling of being watched or at least seen or noticed. As the gaze of the other is imagined to turn to them they touch their face as if they are to affirm that they are there, and to disarm a potentially negative glare. In this image of Gonson performing this act of self-anointment it is possible that Hogarth, an avid watcher of people, is simply pointing to a universal trait, one of those habits that are so common that they go for the most part unnoticed.