The guidebooks of Belle Vue 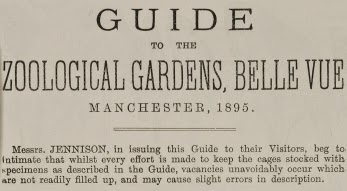 We’re delighted to present another post on the history of Belle Vue from Courtney Stickland, a volunteer on the Belle Vue Project from the University of Manchester. This week, she takes a closer look at some of the guidebooks in the collection:

These days, your standard amusement park guide consists of the bare necessities: a map of the park: a legend of symbols denoting toilets and cash points, a schedule of shows and fireworks, and maybe – if you’re lucky – a few brief indications of which rides you should avoid if you’re prone to motion sickness.

In contrast, visitors arriving at Belle Vue Zoological Gardens in the late nineteenth century were met with a far more elaborate description of the attractions they could expect to discover within the walls of the park. For the price of one penny (equivalent to approximately £2 today), visitors could purchase a detailed guidebook outlining the history of Belle Vue and its founder John Jennison, the architectural features and residents of the zoo’s various animal houses, transportation information from the park (including cab fares, train and omnibus schedules, and road routes), the historical background of the latest fireworks spectacular, and much more, all printed in-house.

As I mentioned in my previous post for this blog, I enjoy utilising maps and crude orienteering to find my way around, but the Belle Vue guides provide an altogether different experience of space than one derives from the visual material of a map. While these guidebooks provided pull-out maps to assist visitors in making their way around Belle Vue, the textual component of the books provide a particular experience of the park’s grounds, predetermined by the author. Following a brief introduction, nearly all of the guidebooks lead the visitor through Belle Vue’s zoological exhibits, listing the cage numbers, names and origins of the park’s collection, and detailing the route the visitor should take through the menageries, gardens, amusement park rides and restaurants. 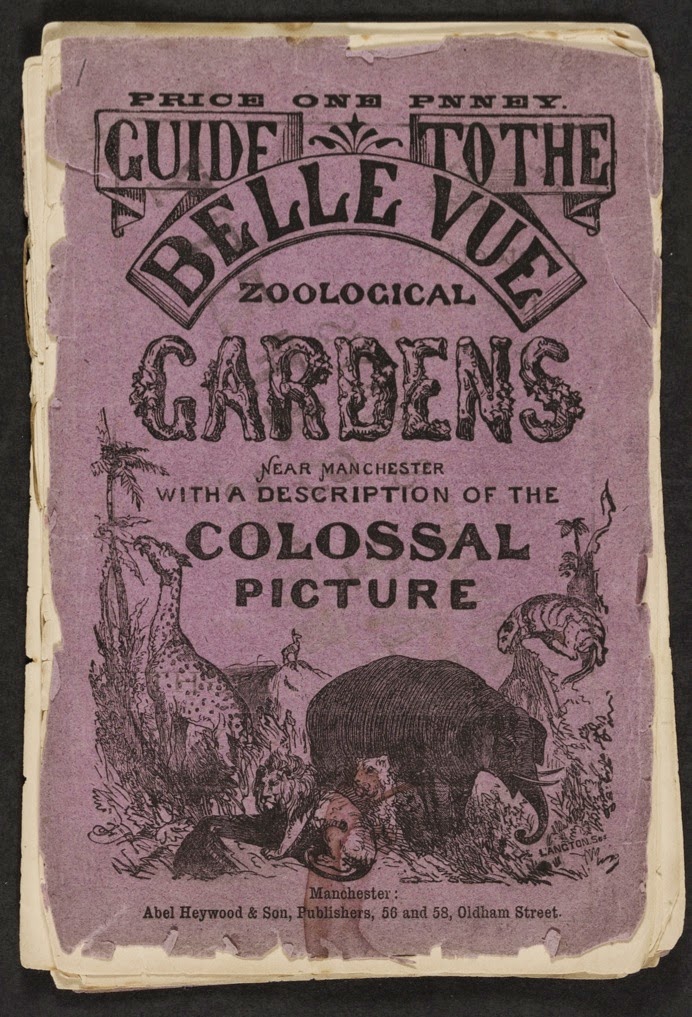 Viewing these guidebooks today, I am struck by the highly crafted experience these guidebooks provide in contrast to the freer, less structured exploration one would undertake with just a map (or even without one). Their emphasis on language rather than images and maps encourages the reader to digest the written directions on the page and then situate oneself within the physical surroundings of the park, similar to receiving directions from a GPS device today. In addition to directing the reader along a pre-determined course of the park, the guidebook also releases snippets of information about the various sights the guest would see as they made their way through Belle Vue, including: 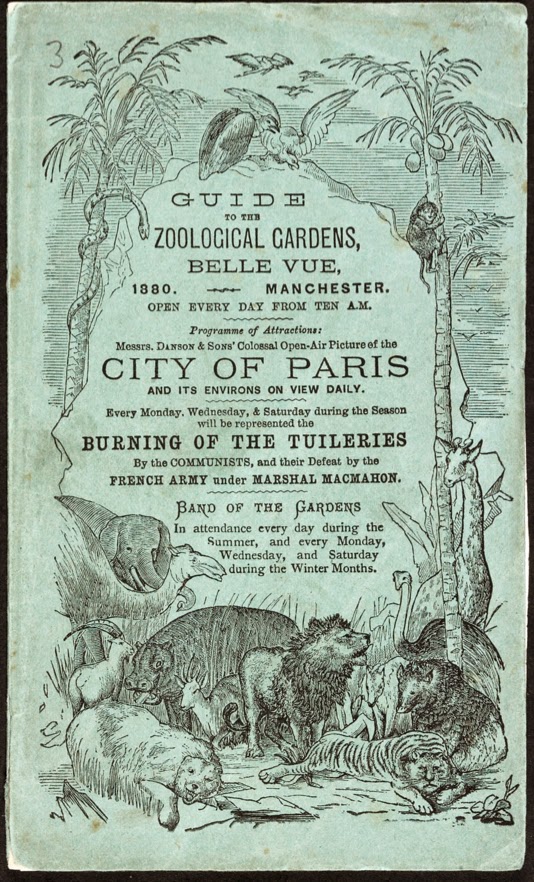 By narrating the visitors’ progress through the park, the guidebooks – illustrated with particularities of the park-going experience, as well as drawings of the animals and park surroundings in later editions – offered guests a means to navigate Belle Vue Gardens during their visit, but also served as a highly detailed souvenir for later reflection. Like slideshows or home movies of family vacations, the guidebooks could allow Belle Vue guests to revisit their memorable trip to the park and share information with friends and family who had not yet visited themselves, drawing heavily on the spatial experience of the park. In addition to the experiential prose contained inside of the guidebooks, the cover artwork of these ephemera became increasingly elaborate and decorative towards the end of the nineteenth century. 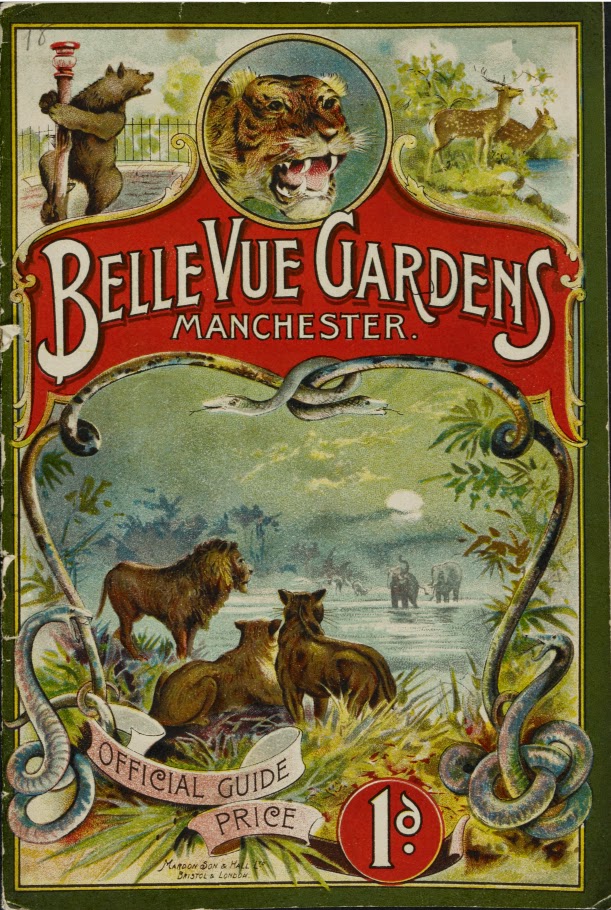 Who would have purchased and used these guidebooks? The books outline a range of price points on offer at the park and the books themselves are relatively low cost for the time, but the extensive use of textual description to inform the reader about the park layout, animals on view and costs suggests that these souvenirs were intended for a middle class audience. The increasing use of animal illustrations in later editions may have been an attempt to cater to non-literate readers, including young children. Explanations of the fireworks displays did not assume readers’ education and prior knowledge of historical context but were nevertheless lengthy (taking up at least three pages of the guides). 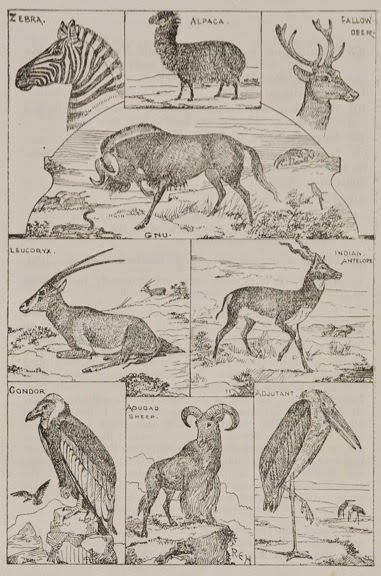 An examination of these guidebooks raises issues about mobility, access and reception within Belle Vue’s gates. The emphasis on the written word rather than illustrations and maps creates a division between visitors who could access the guides. The result of this difference in park experience is that while all visitors to the park would be able to gaze upon exotic animals and foreign-styled gardens, only some would be able to fully access the knowledge that Belle Vue was offering. The structured tour narrative of the guidebook led visitors along the ‘correct’ path through the park in sequential order through animal exhibits, amusement areas and restaurants, educating along the way; conversely, those unable to afford or comprehend the guidebooks were left to their own devices, rendering their visit more spectacular and entertaining than educational. 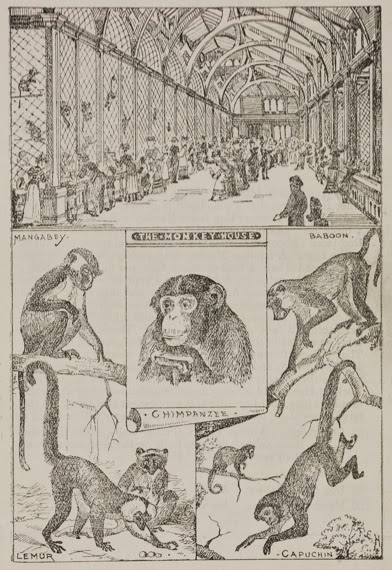 This narrative structure persisted into the late 1920s. By the 1930s, the guidebooks had retained much of their text-heavy structure, albeit with black and white photographs replacing the sketches of the Victorian and Edwardian period. While these more modern guides provide extensive descriptions of the grounds and attractions within, gone is the grand narrative structure of the park’s layout suggested in the earlier guidebooks. Instead, only the zoological displays are structured around an ideal itinerary for guests ‘who wish to see as much as possible in a single visit’ by ‘follow[ing] from letter to letter’ on the provided plan. Navigation of the rest of the park is left to the guest, with the different attractions being described in their own exclusive section without a grand narrative dictating progression through the park space.