The Medals Of The Sun King 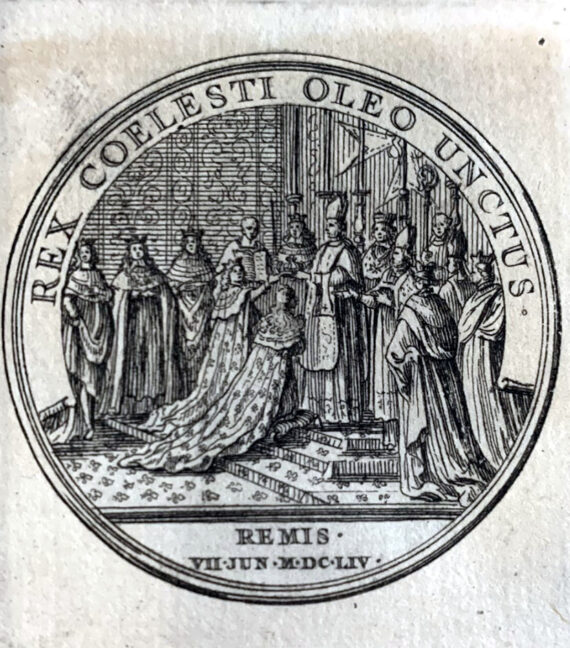 Inspired by the recent anniversary of the death of Louis XIV, we investigated our two editions of  the Médailles sur les principaux événements du règne de Louis le Grand, avec des explications historiques, or ‘Medals for the main events of the reign of Louis the Great, with historical explanations’ in more detail. Our earlier copy was printed in 1702 by the l’Imprimerie Royale in Paris. We also have the 1723 edition, in a rather grander folio format with engraved borders for each page, which we may revisit on another occasion. The 1702 work was commissioned by the court, and a significant part of its purpose was to enhance Louis XIV’s reputation as the Sun King by bringing attention to significant events throughout his reign, such as military conquests or royal births and marriages. The book is thus a digest of the significant effort involved in producing commemorative medals as a physical reminder of the activities of the state (and Louis as its personification) on almost any occasion that tended to display them to advantage.

The medals have attracted a good deal of attention from that day to this, and we can recommend several excellent sources online. The Royal Collection Trust points out that the work ‘is celebrated for its ‘roman du roi’ typography, a ‘rational’ design of type using perfectly vertical axis and perfectly horizontal, symmetrical serifs, first produced by Jacques Jaugeon in 1695. Philippe Grandjean was commissioned to cut punches based on Jaugeon’s designs, and this modified type was used for the first time in the printing of this volume’. The Imprimerie Royale was, like much else in Louis’ France, an institution designed to project royal dignity and gravitas. There are eighty-nine items in the collections here with their imprint, all of which are models of fine printing and excellent paper quality.

Louis’s use of medals as royal propaganda was sufficiently innovative and extensive that it inspired a small exhibition at the British Museum in 2015 entitled Triumph and Disaster, of which there is a very detailed and fascinating review by the (over-modestly self proclaimed) Idle Woman. The frontispiece is a detailed engraving depicting Mercury and two putti with a portrait of Louis XIV; underneath this are the figures of History and Time. The etching of Louis was created by Nicolas Pitau the Younger (1670-1724) a prolific engraver, and was based on a portrait by the famous French Court painter Hyacinthe Rigau (1659–1743). The scene below however, was engraved by Charles Louis Simonneau (1645-1728), and was copied from a painting by Antoine Coypel(1661 – 1722) the official court painter of the King’s brother Philippe, Duke of Orléans. The British Museum provides more information. 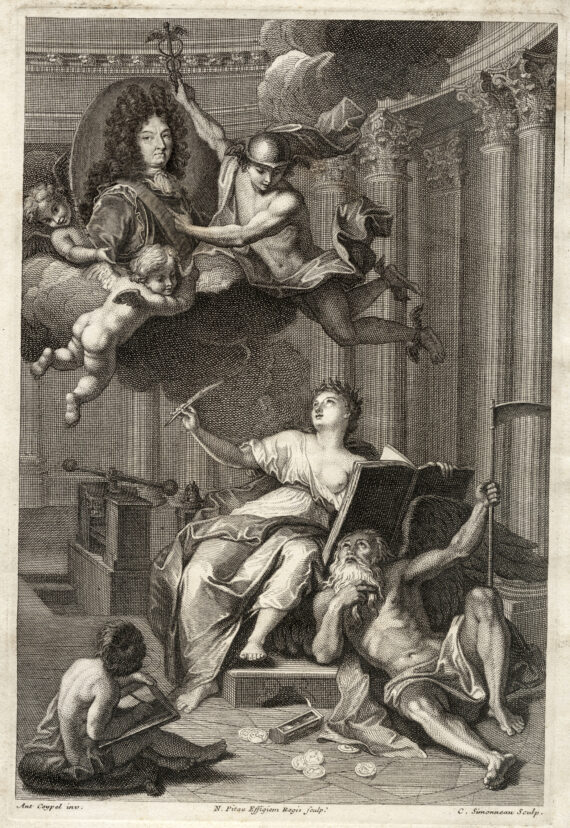 The 1702 printed work is as much a tribute to the engravers as to those designing and casting the medals themselves, and we will select a small handful to exemplify their work.That below commemorates the beginning of the regency of Louis XIV’s mother, Anne of Austria (1601-1666), in 1643. The medal depicts Queen Anne seated on a throne with the young Louis XIV beside here. As can be seen by the scale of the photo the engraving is small but alive with detail. Queen Anne was not a popular choice for regent given her connections to Spain during a time when tensions between France and Spain were high. Louis XIII, her husband, even tried to prevent her becoming sole regent, but she proved too wily a politician to outwit and had these restrictions set aside in short order. 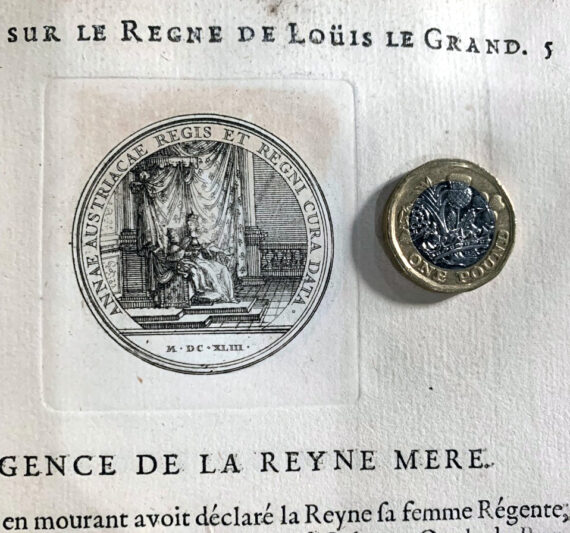 Medal commemorating the regency of Anne of Austria in 1643.

The Coronation of Louis XIV follows in due course: here we see him being anointed with ‘celestial oil’ and the crown being placed on his head by regent and archbishop at Rheims on 7 June 1654. The Archbishop of Rheims (the officiant by custom) was apparently absent on the occasion itself.

The medal below was struck to celebrate one of a series of French victories during the Franco-Dutch War (itself part of a protracted struggle between France and Habsburg Spain and its dependencies), the capture of Dôle following the siege of Besançon in 1674. 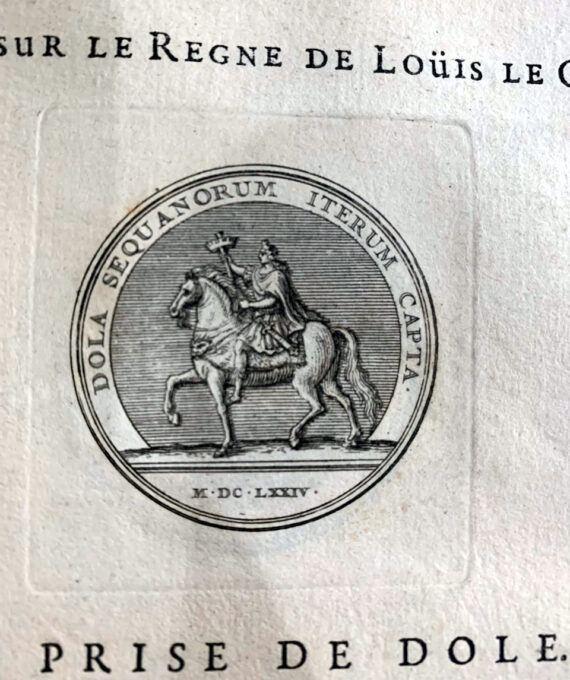 Further boasting in medal form is marked by this bird’s eye view of the port of Brest in 1681, intended to impress or even to intimidate with its fortress like strength. The accompanying text describes Brest as ‘this god of ports’. 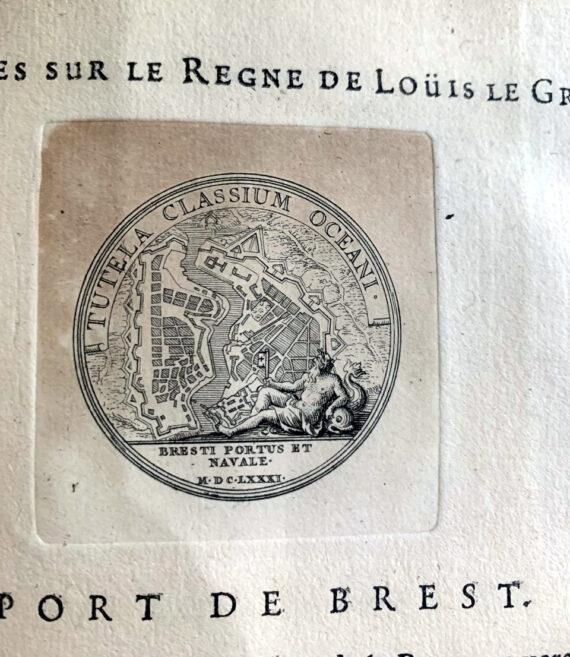 Our next selection highlights the founding of the Military Order of St.Louis in 1693, and shows Louis XIV bestowing this largesse on the French Military. The Order was named after his predecessor Saint Louis, and was intended as a reward for exceptional officers. It was the first decoration of its kind that could be granted to those outside the ranks of the nobility. 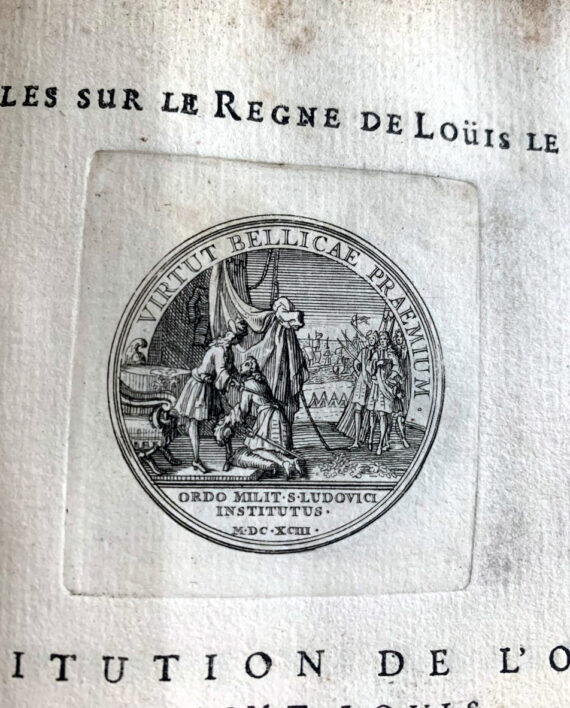 The success of the series of medals – and the 1723 posthumous edition ‘du regne entier de Louis le Grand’ runs to over 300 leaves – also contained the seeds of its decline. Piqued, perhaps, by having triumphalist medals issued in commemoration of their defeats and humiliations, his enemies began to issue lampooning and parodic medals on the occasion of some of the defeats and failures that began to occur in the later part of the reign, with the British and the Dutch being well to the fore in this regard. Dutch mockery after the Battle of La Hougue, for example picked up Louis’s grandiose and rather problematic motto nec pluribus impar, ‘not unequal to many’ and decorated their medal of the French flagship exploding with the derisive nunc pluribus impar, ‘now unequal to many’.