The only book you’ll ever need 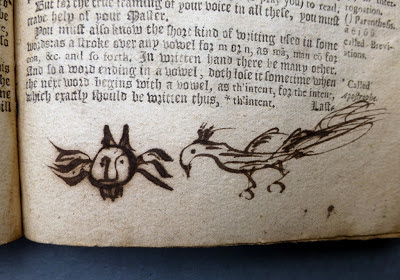 Edward Coote’s The English School-Master was first published in 1596. A slender book, it was nonetheless designed to contain everything necessary for teaching students of all ages to read and write in English. It boasted extravagantly that ‘he which hath this booke only, needeth buy no other to make him fit from his letters, unto the Grammar schoole, for an apprentise, or any other his owne priuate use, so farre as concerneth English’. 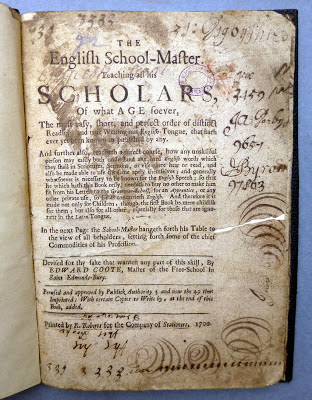 Edward Coote (1562?-1610), had been appointed head-master of the Free Grammar School of King Edward VI of Bury St. Edmunds, Suffolk, only a few months before the book was published, but, after serving only 11 months as head, resigned his post in May 1597. Little is known of his life after this. 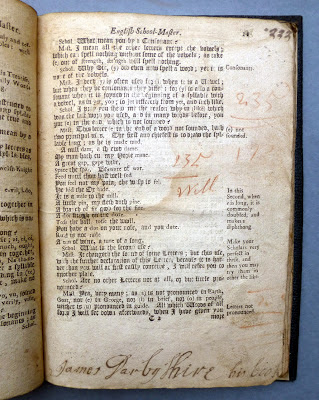 The book is important because it contains the first substantial hard-word glossary to the English language, which gives an indication of the words an uneducated person probably knew (the common English words not found in his list) as well as those a literate person with a basic education would have been expected to know. The English School-Master was remarkably popular for over a century after its publication, and by 1737 had been through over sixty-four printings from various printers, most of which were commissioned by the Stationer’s Company. Of these sixty-four editions, only around half are extant, a very low survival rate which probably reflects its heavy use as a textbook, with individual copies being assigned to students. 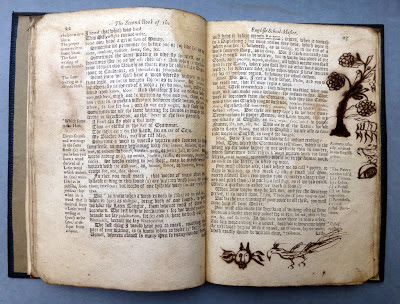 The Library’s copy of the 49th printing of 1700 is rare. According to the English Short Title Catalogue only one other copy of this edition exists, as far away as Columbia University. Our copy is of particular interest, the numerous annotations offering substantial clues as to how it might have been used. 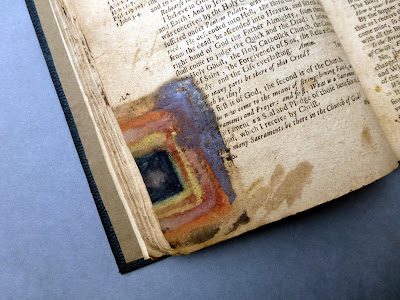 Throughout there are pen-trials, marginal notations and doodles by ‘James Darbyshire’, who inscribed the book on many pages with his name, and others. The back page is filled with copy exercises, including a prayer. Unfortunately we know nothing about James Darbyshire other than what we find in this book. 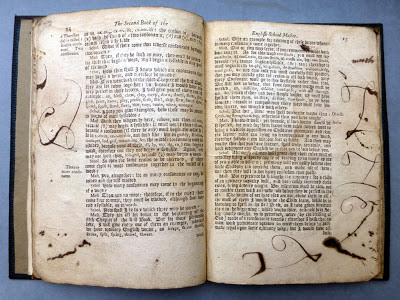 Many of his scribbles are clearly the product of a bored student: he wrote out the word ‘sycophant’ from the dictionary, was prompted by the observation that ‘a fowle can fly over a foul way’ to draw birds and trees, painted pastel patterns in the margin and failed repeatedly to get his pen to work. We can only hope that he managed to concentrate sufficiently to avoid Coote’s exhortation to his scholar:

My Child and Scholar, take good heed
unto the Words that are here set;
And see thou do accordingly,
or else before thou shalt be beat. 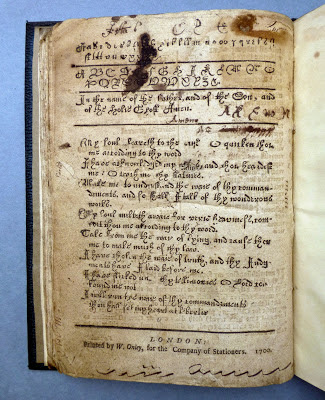 We are grateful to Jill Shefrin of Trinity College Toronto for drawing this copy to our attention and to the University of Toronto website for an account and edition of Coote’s work.