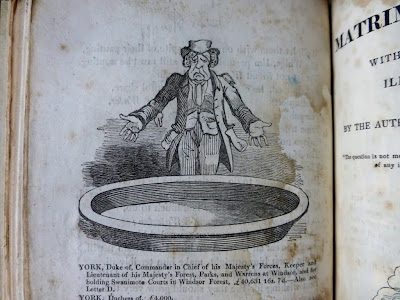 We recently acquired from the bookseller Christopher Edwards a collection of fifteen pamphlets, mainly the work of William Hone, published between 1817-1821. The Library already holds examples of a number of these in different editions, but there are quite a few that we didn’t have, including The Political ‘A, Apple-Pie;’ or, the ‘Extraordinary Red Book’ versified… 4th edition, 1820.

This political satire was based on an official document published as The extraordinary red book: an account of all places, pensions, sinecures, grants, &c. The expenditure of the civil list, the finances and debt of Great Britain; with a variety of official documents never before published, a list of persons receiving state salaries.

The Political Apple Pie satirises those who received a healthy salary for doing no actual work and purports to be by ‘the author of the Political House that Jack Built’, i.e. William Hone, but according to Dorothy George in her Catalogue of Political Satires in the British Museum, in this is not the case.

The splendid woodcuts are by George Cruikshank and the descriptions are from Dorothy George. 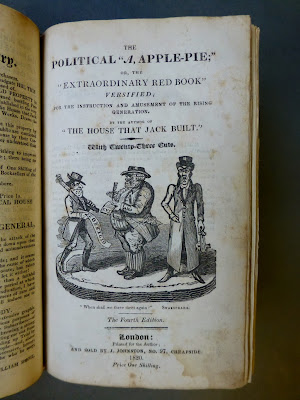 Title page: Three men stand together: a bloated and repulsive tax-collector with ink-bottle attached to his coat writes on a long paper headed Tax; a man with a huge constable’s staff holds out a writ inscribed [E]x Officio, denoting Press prosecutions … and a jailor holds keys. 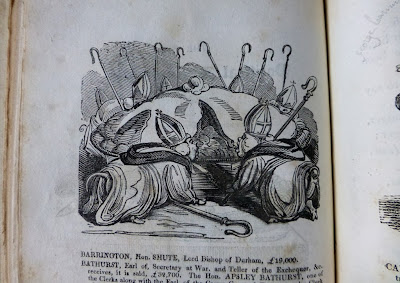 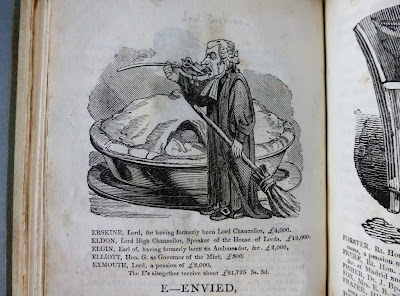 E – Envied: Erskine, in wig and gown, stands beside the pie, holding a broom. He puts to his mouth a spoon in which are a sealed patent and a mace. A satire on Erskine’s pension as former Chancellor.

Y – Yawn’d o’er it (shown at head of post): John Bull, a ‘cit’ in tattered clothes with empty pockets, stands despondently over the empty dish. York had so much pie that none was left for ‘poor old John Bull… nor for X, nor for Z’.

2. The bill of the late Duke of Richmond for universal suffrage and annual parliaments … with his declaration of those rights of the commonalty of Great Britain. London, W. Hone, 1817.

3. The sinecurist’s creed, or belief; as the same can or may be sung or said throughout the Kingdom. Bristol, J. Arnold, n.d.

4. The political litany, diligently revised; to be said or sung until the appointed change come. London, printed for one of the candidates for the office of printer to the King’s most excellent Majesty, 1817.

7. The political ‘A, Apple Pie’, or, the extraordinary red book versified. 4th edition. London, for the author, 1820.

10. The King’s treatment of the Queen shortly stated to the people of England. 3rd edition. London, W. Hone, 1820.

11. In Parliament. Dropt clauses out the Bill, against the Queen … W. Hone, Ludgate Hill, Solicitor for said clauses. [1820?]

14. The form of prayer with thanksgiving to Almighty God … for the happy deliverance of her Majesty Queen Caroline from the late most traitorous company. 3rd edition. London, W. Hone, 1820.

15. The political showman – at home! Exhibiting his cabinet of curiosities and creatures – all alive! London, W. Hone, 1821.