To cut or not to cut…

It’s always depressing, when cataloguing, to find that the copy of the book you’re describing is imperfect, or missing something important or interesting. Often a folding plate has been lost, or a map is no longer where it once was. In these circumstances, all we can do is to describe what’s missing and move on: it’s irritating but hardly something to get het up about. After all, we are librarians, not collectors, and imperfect books are often more interesting than ideal or perfect copies. What does get us rather more worked up, however, is finding examples of mutilation and vandalism in books, although even here the deliberate vandalism of text and image for political, moral or religious motives can be of enormous significance. Censorship in books might be regrettable but it’s always interesting to find examples. Here are four from our collection:

The works of Lucian of Samosata, printed in Venice by Aldus Manutius in 1503 was the first Aldine edition of Lucian and only the second printing in Greek, following a Florence edition of 1496. Our copy, along with several others, has certain sections missing, including this crude attempt to cut out a title heading. Ironically, much more salacious content has been left untouched. 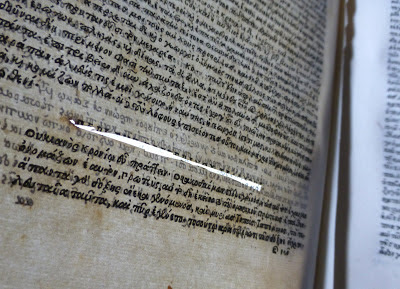 The Chronicles of England, printed by Wynkyn de Worde in 1502 has also suffered the attentions of the censors, with every occurrence of the word ‘Pope’ having been inked over. Unfortunately for their efforts, the ink has now faded to such an extent that the additions serve more as a highlighter than as censorship. 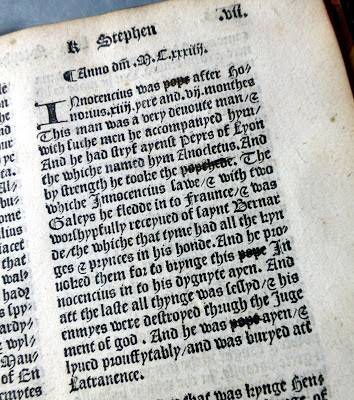 Giustiniani’s edition of the Mishneh Torah, printed in Venice in 1550-51, has been censored throughout in black ink. Jews were not allowed to own printing presses in Venice but non-Jews were willing and even eager to print Jewish texts. Giustani’s edition was brought out in the same year as that of his rival printer Alvise Bragadini. Giustiniani attacked his rival and the ensuing war between printers grew so fierce and bitter that the case was put before Pope Julius III for arbitration. The Pope issued a Bull banning the printing of Hebrew books and ordering the confiscation and burning of those already in existence. In the towns of northern Italy, Hebrew books were burnt in public squares and it would be another ten years before Hebrew books would be printed again in Venice. Giustiniani, who had instigated the quarrel, was forced out of business. Bragadini survived and resumed Hebrew printing with the death of the Pope and the end of the ban. 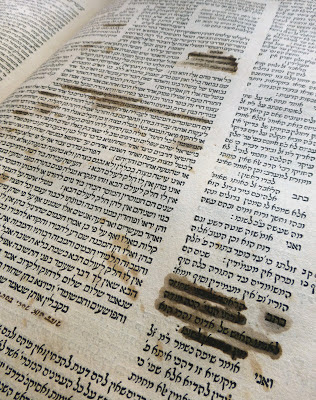 Jacob Rueff’s De conceptu et generation hominis of 1554 has been savagely attacked by a Victorian, J. Frederick Becon of Beaumaris, who decided that images of birth and newborn infants were obscene and hacked out great chunks of the book, destroying many pages. You can read more about this book in our former blogpost on the subject. 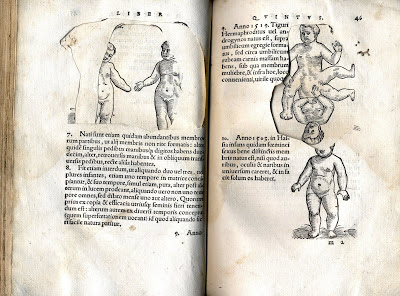 However, just when we are in danger of getting too depressed by all this mutilation, we encounter an extraordinary image which somehow managed to escape the attentions of the censors. In many copies of Discours sure les medals et graueures antiques, principalement romaines, by Antoine Le Pois (printed in Paris in 1579), the full page woodcut of Priapus was often removed. In our copy, however – and those of a sensitive disposition may wish to look away now – the image is still there in all its remarkable glory. 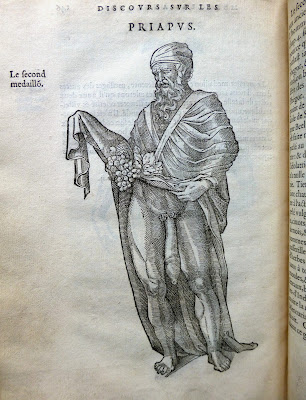