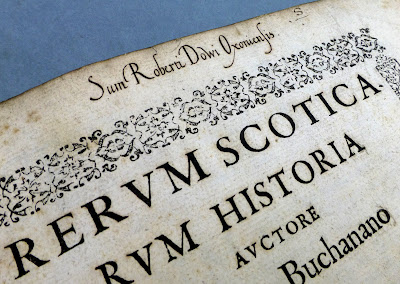 An extraordinarily beautiful series of decorated annotations has been revealed in the Library copy of George Buchanan’s Rerum Scoticarum historia, published in Edinburgh in 1582. 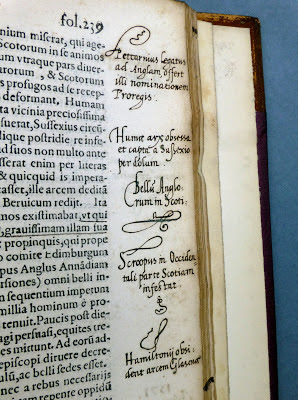 The annotations were made by the sixteenth-century music copyist Robert Dow, a most interesting character who is chiefly remembered for his collection of five partbooks for voices and viols which remain one of the most important – and beautifully written – sources of Tudor music, particularly that of the composer William Byrd. 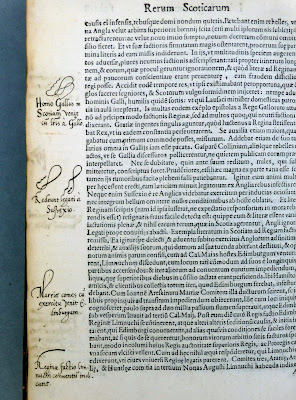 Dow (1553-1588) was the eldest of five sons born to Lettice Bull and Robert Dowe, a merchant and philanthropist. He went up to Corpus Christi College, Oxford and later to All Souls to study civil law. He also gave lessons in penmanship to, amongst others, the Elizabethan statesman and poet Robert Sidney, 1st Earl of Leicester. Dow’s notes on Buchanan’s Rerum Scoticarum show a strong interest in the legendary past of both Scotland and England as represented in the works of Geoffrey of Monmouth. 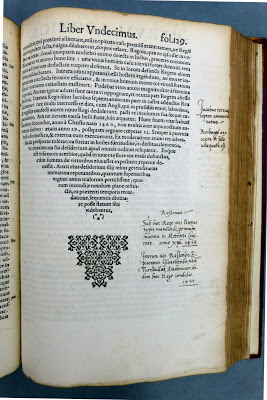 Little is known about Dow’s short life, and he died intestate in 1588, leaving a library of over 300 volumes, including the music partbooks. The comments he wrote in these suggest a thoughtful and sensitive individual with a deep love of music: ‘music moves the very trees and savage beasts’, ‘wine and music gladden our heart’. In an elegy written to the composer Robert Parsons he noted: ‘you who were so great in the springtime of life, how great you would have been in the autumn, had not death intervened’. The same, perhaps, could be said of Robert Dow himself. 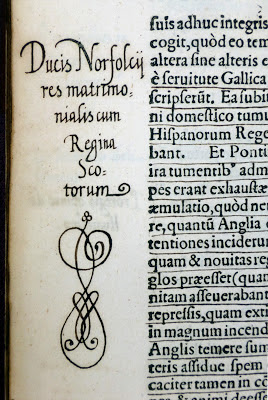