Turning on the waterworks 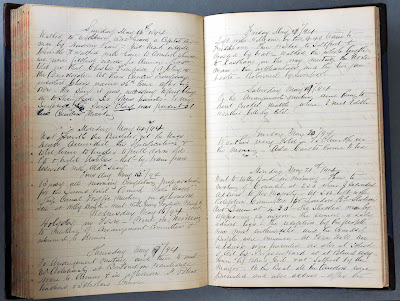 On this day in 1890, Alderman Sir John James Harwood laid the foundation stone of the dam at Thirlmere, the first stage of the project to take water from the Lake District to the growing city of Manchester. Also present at the ceremony was Councillor Bosdin T. Leech, Deputy Chairman of the Waterworks Committee and a major player in the great engineering extravaganza that was and still is the Thirlmere Aqueduct.

The ninety-five mile aqueduct runs from Thirlmere to Heaton Park reservoir and is the longest gravity fed aqueduct in the world. The level drops by 30cm per km and water takes a day to make the journey entirely by gravity and with no need for mechanical pumps.

Bosdin Leech writes at length about the project to dam Thirlmere in his many volumes of diaries, which are part of the Leech archive. Although Bosdin began writing diaries as a child, encouraged by his father, the bulk of the diaries cover the later part of the nineteenth century, when he was a major civic figure, becoming Lord Mayor in 1891-2.

As well as the inevitable commentary on civic events and political gossip, he also records his family life and feelings about a wide range of matters, which often make hugely entertaining reading, Bosdin being something of a likeable buffoon. He often writes of his visits to the Lake District on reconnaissance trips for Thirlmere, where he takes boating trips on the lake and goes out for substantial dinners with his fellow councillors. On the occasion of the ceremonial turning on of the tap, the water is slow to emerge, causing concern to Bosdin and the other dignitaries, who, predictably, end up being liberally sprayed by the ensuing rush of water.

You can find out more about the Leech collection here.