Two Libraries and an Orrery… 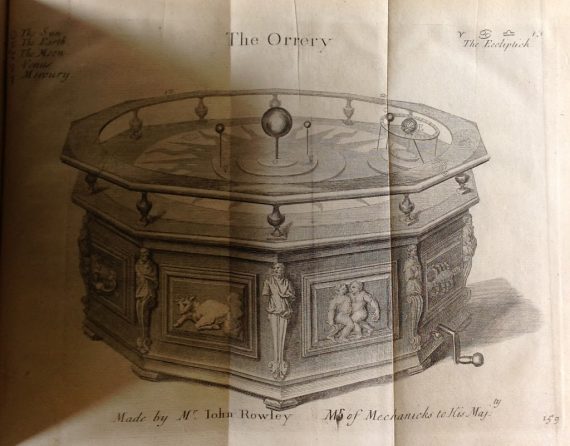 As a new Room Guide at the National Trust’s Dunham Massey Hall, I’ve been struck by the enthusiasm which many visitors display for the scientific instruments on display in the library there. The piece that excites most interest is the brass and oak Orrery made by ‘Tho. Wright instrument maker to his Majesty in Fleet Street London’ around 1730.

An Orrery is basically a mechanical model of the solar system and, although the Greeks developed something similar around 125 BC, early models were of course geocentric (ie the planets were believed to circle around the earth). It wasn’t until after Copernicus published De revolutionibus orbium coelestium in 1543 that scientific models were developed which reflected the discovery that the Sun revolved daily round the Earth. The renowned clock makers George Graham and Thomas Tompion reputedly built the first modern orreries and tellariums around 1704 in England. It is thought that the instrument maker John Rowley saw one of these when it was awaiting shipment to Prince Eugene of Savoy, along with instruments which he had made. Rowley noted its detail and about 1712 produced an improved model. Sir Richard Steele then saw this instrument and, being ignorant of those made by Graham, misguidedly named it an orrery in honour of Charles Boyle, Earl of Cork and Orrery. Tellurions and planetariums subsequently became known as orreries.

Back at Chetham’s, whilst returning books to the stacks a couple of weeks ago, I was delighted to come across John Harris’ book, published in 1729, Astronomical dialogues between a gentleman and a lady…which also promises on its title page ‘With a Description of the famous Instrument called the ORRERY; made by Mr John Rowley, Master of the Mechanicks to the King.’
MAIN Collection – Shelf position: 2.A.6.44 John Harris (c.1666-1719) was an Anglican clergyman and fellow of the Royal Society who through private teachings, public lectures and published writing shared new developments in science with a wide audience. Harris also published by subscription the first volume of his famous Lexicon technicum, or, An Universal English Dictionary of Arts and Sciences (1704), which became one of the first books to display the importance to the public of Newton’s science.

As Harris explains in The Preface ‘The Reader will easily see that the Conversation in these Dialogues is feigned, and in Imitation of Those of the excellent Mr. Fontenelle, On the Plurality of Worlds. And that the Digressions, Reflexions, Poetry and Turns of Wit, are introduced to render Those Notions pleasing and agreeable, which perhaps without such a kind of Dress, would appear too crabbed and abstracted.’ Entretiens sur la pluralite des Mondes or Conversations on the Plurality of Worlds, was published in 1686 by Bernard le Bovier de Fontanelle. In this work Fontanellle speculates on the possibility of life existing on other planets and on space travel. The book became hugely popular – it wasn’t written by a scientist for other scientists but took the form of a series of conversations between ‘a charming philosopher and his hostess, a Marquise, as they strolled through her moonlit gardens.’

Harris declares that he gave Fontanelle’s book to ‘the most engaging Lady M’ some seven years earlier and that…
‘Some Years before her Death, when I went to visit that accomplish’d Lady at her Country Seat, I was a little surprised to find her, the next Morning after my Arrival, studiously viewing a pair of large Globes, which stood in the Drawing-Room, looking into the Garden, and which I used to make my Place of Study. Good Morrow, said I, Madam, what! hath Fontenelle made an Astronomer of you in good earnest? Are you really contemplating the Order and Motions of the Heavenly Bodies? Or are you rather seeking on the Earthly Globe, where to make new Conquests?’

Harris, like Fontanelle is taking quite a radical stance in choosing to publish a conversation with a woman about scientific theories but states that he…
‘…Often wished that the same Curiosity and Love of Knowledge would inspire more of the fair Sex, for it would mightily enlarge their Empire and Power over ours, by endowing them with more real and lasting Beauties, such as would improve with Time, and strengthen even in Age itself.’

In the section of the Dialogues which relates to the ‘Description of the Orrery, Lady M makes a request that he might…
‘Get me a sight of the famous Orrery, which I have heard you and others so often speak of; and which I think was made by Mr. Rowley, the famous Mathematical Instrument-Maker, and Master of Mechanicks to the King; and whom I find you have always recommended in your Books, as the best workman of his Profession…’

Harris gallantly responds ‘Madam, said I, the fine Instrument of that Name, which Mr. Rowley made for the East-India Company, is now luckily in a Place where I can come at it; I will go thither to morrow, and then appoint you a Day when I will wait on you to see it.’

Once the orrery is provided Harris proceeds to give Lady M full instructions on how it works  including a description of the instrument can illustrate day and night.

‘He hath provided this little Lamp to put on upon the Body of the Sun; which casting, you see, by the Means of a Convex Glass, and the Room made a little dark, a strong Light upon the Earth; will shew you at once all these things; first how one half of our Globe is always illuminated by the Sun, while the other Hemisphere is in the dark; and consequently, how Day and Night are formed, by the Revolution of the Earth round her Axis; for as she turns from West to East, she makes the Sun appear to move from East to West. And you will please to observe also, Madam, that as I turn the Instrument about in Order to shew you the several Seasons of the Year, and the Length and Decrease of Day and Night, how the Shadow of the Moon’s Body will cover some part of the Earth, and thereby shew you, that to the Inhabitants of that part of the Earth there will be a Solar Eclipse.’

There is a famous and very dramatic painting by Joseph Wright A Philosopher Giving that Lecture on the Orrery, in which a Lamp is put in the Place of the Sun held by Derby Museums and first exhibited in 1766.

Scientific lectures and demonstrations presented by traveling scientists were a popular form of public entertainment during Wright’s lifetime. As an artist who showed an early interest in mechanics and science, Wright may have attended lectures on astronomy and pneumatics, among other topics, held at the town hall in Derby during the 1750s and 1760s.

‘Grand illuminated orrery. Mr Longstaff respectfully announces to the ladies and gentlemen of Manchester, his intention of delivering in February next, a course of familiar lectures on astronomy, which will be illustrated by his newly-invented and superior transparent orrery, fifty feet in circumference…’
MAIN Collection – Shelf position: Cambrics.25(1) ‘Mr. Lloyd has the honour, most respectfully, to inform the ladies and gentlemen of Manchester and its vicinity, whose friendship he is ambitious to conciliate and maintain, that he has appropriated…: Three evenings. Minor-Theatre, Manchester. Monday, Wednesday, and Friday. The 18th, 20th, and 22d of May, 1818. The dioastrodoxon, or grand transparent orrery. The largest and most magnificent in the British Empire…’
MAIN Collection – Shelf position: Scrapbook B.9.41.161(1)