What’s hidden in your tea leaves? 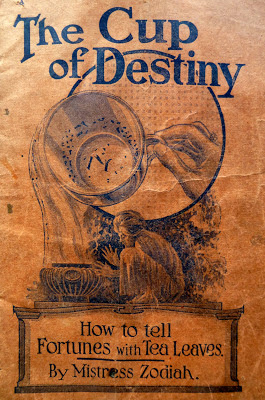 Here at the Library we like nothing better than a proper cup of tea made in the pot with tea leaves, so we were thrilled to stumble upon a copy of The Cup of Destiny: How to Tell Fortunes with Tea Leaves, written by the exotic and mysterious Mistress Zodiah and published in the early twentieth century by Manchester’s Daisy Bank Press.

Mistress Zodiah (who writes in a style remarkably similar to that of a middle aged gentleman) introduces the art of ‘tea-leafistry’, as she so eloquently calls it, by explaining that she herself, whilst in north Wales en route to a business meeting in Dublin, happened upon a lady by the name of Mrs Evans. This lady, who was known to the author as ‘highly educated, intelligent, and … perfectly truthful’, succeeded in foretelling a terrible rail crash, missed only by a hair’s breadth by our intrepid businessperson. Astounded, the author begins an earnest investigation of the subject, the findings of which she (or he) shares with us in this little book.

The book is set out alphabetically, with almost every possible arrangement of leaves accounted for. The attention to detail is impressive, although it has to be said that the modern eye might have some trouble distinguishing between, for example, a fox (‘beware a false and cunning friend’) and a dog (‘a faithful friend closely watches over your interests’), not to mention problems identifying the difference between a pelican (‘look after your business better’) and a joint of meat (‘what you are striving for is not worth the trouble’).

Whether it would be possible to make out some of the more unusual arrangements is also open to question, but Madame Zodiah’s suggestion that the leaves might form themselves into the shape of an ankle, a lobster, a weasel, a guinea pig, a naked person or a set of bagpipes has certainly motivated us to put the kettle on.