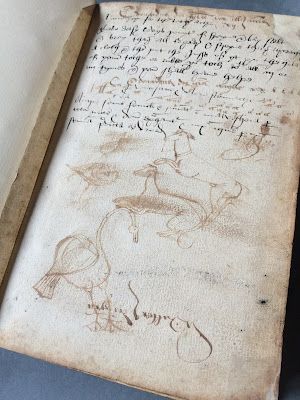 The first question visitors invariably put to library staff is ‘Have you read all these books?’, to which the answer is always an automatic ‘Yes of course!’. The follow-up question, by contrast, requires more consideration: ‘What’s your favourite book?’
The usual answers – ‘It all depends’, or ‘It varies, I change my mind all the time’- are proof that books, like loves, change over the course of time. The attraction of a particular book is hard to quantify but for those of us who work with rare books every day of our lives, the reasons why some books are more interesting than others is usually because their appeal is multi-layered, and because there is always more to say and discover about them. Take, for instance, this week’s favourite. The work is a sammelband – a composite volume of two or more texts. In this case there are two works: a Latin herbal printed in Louvain by Jan Veldener in 1485-86 and a copy of De urinis et pulsibus, written by Gilles de Corbeil around 1200 and printed in Lyons by Martin Havard in 1500. The two texts are interesting in their own right: early printed herbals are rare, and remarkable for what they tell us about the history of science and of scientific illustration. They are practical texts rather than theoretical and show how nature could be used to benefit people. This particular work was one of a number of herbals put out by Veldener in the 1480s  derived from the first printed herbal, published in Mainz in 1484 by Peter Schoeffer. Veldener’s text is identical to the Mainz edition, except that the German names for plants were replaced with Netherlandish names. Almost all of the woodcuts are identical, although they have been mostly reversed in the Louvain work. 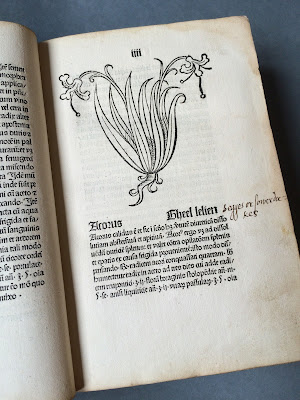 The second text was written at the turn of the thirteenth century. The verses were intended as mnemonic aids for de Corbeil’s students and were widely studied and copied. The book is the only one in our collection to have a Library of Congress subject heading ‘Urine – Analysis – Early works to 1800’.The two works were bound together in the early sixteenth-century, probably in Cambridge. The remarkable binding of blind-tooled reddish leather over wooden boards is by the ‘Unicorn Binder, so-called for the distinctive unicorn tool used on his bindings. He is known to have bound at least seventy volumes between 1484 and 1505, and this is the only example of his work in our collection. 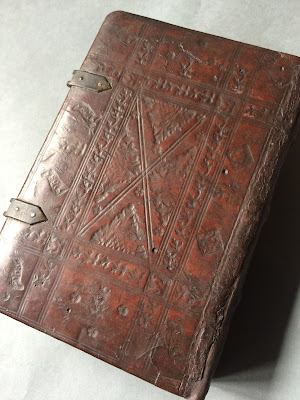 The catalogue description of this is one of the Library’s better and certainly fuller descriptions:Blind tooled to a rectangular panel design, with an intersecting frame consisting of triple fillet borders filled with a repeated, characteristic foliage stamp (Oldham, J.B. Blind stamped, plate XI, stamp no. 50). At each corner, where the edges of the frame intersect, is a dromedary stamp (stamp no. 73). The central panel is divided into four triangles by double fillet intersecting diagonals. Each triangle is filled with small cinquefoils (stamp no. 61) and with half of a large pineapple stamp (stamp no. 72), which according to Hobson, G.D. Bindings in Cambridge Libraries, p. 42, is typical of the Unicorn Binder’s third and final phase, not coming into use until after 1500. Between the intersecting frame and the double fillet border, four tools are used. The cinquefoil and foliage stamps (stamp nos. 61 and 50) are found again, together with a sacred monogram scroll, (stamp no. 66) and a barbed rosette within a lozenge (stamp no. 63). The spine is divided by three raised bands into four compartments. Characteristic of the Unicorn Binder, is the positioning of a foliage stamp (stamp no. 50), on each side where the bands end, and the four vertical lines ruled down the spine. Rebacked, with remains of the original spine superimposed. Two incomplete metal clasps, with catches on the lower board.What else can we say about the book? It’s one of a number of books in the Library that contain the owner’s inscription ‘Jo Hartleyus’. Twenty books with this ownership have been identified, most of which are of medical interest, and include another incunable, Johannes de Sacro Bosco’s Sphaera mundi, printed in Venice in 1491, and an edition of Hippocrates dating from 1597. We would love to discover more about Hartleyus or Hartley. An additional fact is that all of his books came to us through a subsequent owner, the poet and shorthand writer, John Byrom (1691-1763), whose collection was given to Chetham’s in 1870. What is the connection between Byrom and Hartley?Finally, sammelband contains additional marks of ownership in the form of sketches and recipes for various ailments. The first fly-leaf contains sixteenth-century pen sketches of deer and a swan together with a recipe for the toothache. This has yet to be transcribed, and if anyone feels an urge to test their palaeography skills on this page, we would be delighted to hear from them. 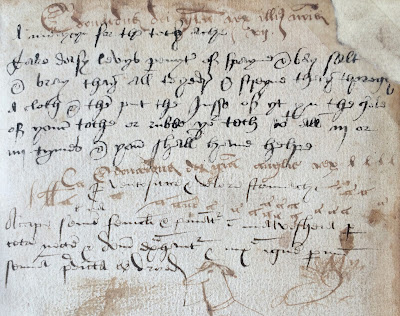