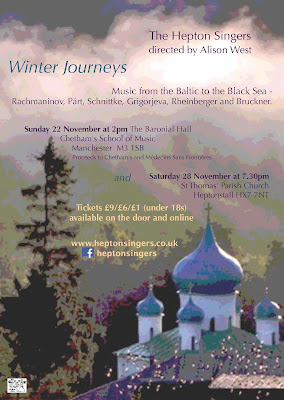 You are warmly invited to an afternoon of Russian music by the Hepton Singers, directed by Alison West, on Sunday 22 November here at Chetham’s Baronial Hall.

The concerts will present music from the Baltic to the Black Sea: performing a programme of stirring song by Rachmaninov, Pärt, Bruckner and others:
Alison West, the director of the Hepton Singers said:
‘In November 2012 the Hepton Singers performed a concert entirely of Russian music. For our St Cecilia concert this year we are re-visiting some of the gems from that concert, in particular a group of four pieces by the contemporary Ukrainian composer Galina Grigorjeva from her exquisitely beautiful composition “On Leaving”. Although this music is recent, the influence of the music of the Russian Orthodox church, and of earlier composers such as Rachmaninov, shines through her work, and some of her harmonies are spine-tingling. We shall accompany these pieces with works by Sergei Rachmaninov, Alfred Schnittke, Arvo Pärt, Josef Rheinberger; and an old favourite of ours, Three Gradualsby Anton Bruckner.
‘The result is a heady mix to warm the toes and heart in the darkness of November.’
Come and hear the Hepton Singers:
Sunday 22nd November 2pm
the Baronial Hall, Chetham’s School of Music, Manchester M3 1SB
Ticket information:
£9/£6/£1 (under 18s)
available on the door and online from www.heptonsingers.co.uk