11 May – Politics can be Murder, Prime Minister!

Not in the case our newly elected one, of course – but the sad history of the demise in 1812 of PM Spencer Perceval, assassinated 203 years ago today in the lobby of the House of Commons by a rather severe critic, should remove the need for anyone to ride behind in Mr Cameron’s chariot whispering ‘remember you are mortal!’ 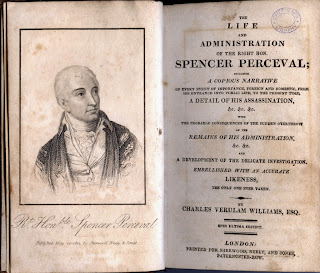 This little work was out within two weeks of Perceval’s untimely demise, and boasts that it carries not only an ‘accurate likeness’ of the unfortunate premier, but ‘the only one ever taken’:

There is the odd parallel to be found with the positions of PMs old and new – both keen to avoid closer European integration, although in Perceval’s case the integration would have consisted of Napoleon taking over his job rather than a plague of straight bananas and square tomatoes. Both took over rather unpopular foreign wars and had to deal with the consequences, and there were some tough times economically, particularly north of the Trent. Some differences in style, certainly – it’s hard to see Mr Cameron characterising Mrs Merkel ‘as the woman in Revelation 17: 3–6, ‘who [sits] upon a … beast … the mother of harlots … drunken with the blood of the saints’, as Perceval saw Boney. 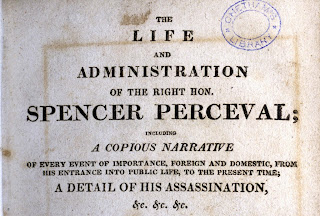 But it was none of these issues, nor Perceval’s anti-Catholicism, his anti-slavery stance, nor his closeness to Pitt and matching distance from the King and Prince of Wales that brought him into the pistol-sights of his murderer.  John Bellingham, who ‘coolly and deliberately’ shot Perceval down, was filled with bitterness and resentment towards the government as a whole for its lack of consular support when he was taken to task for debt by the Russian authorities when trading in Archangel eight years before. Perceval’s fault? Surely not, but for Bellingham, whom the authorities found sane enough to hang for murder, as the man at the top Perceval paid the price – the buckshot stops here.