A Bread and Cheese Bookseller 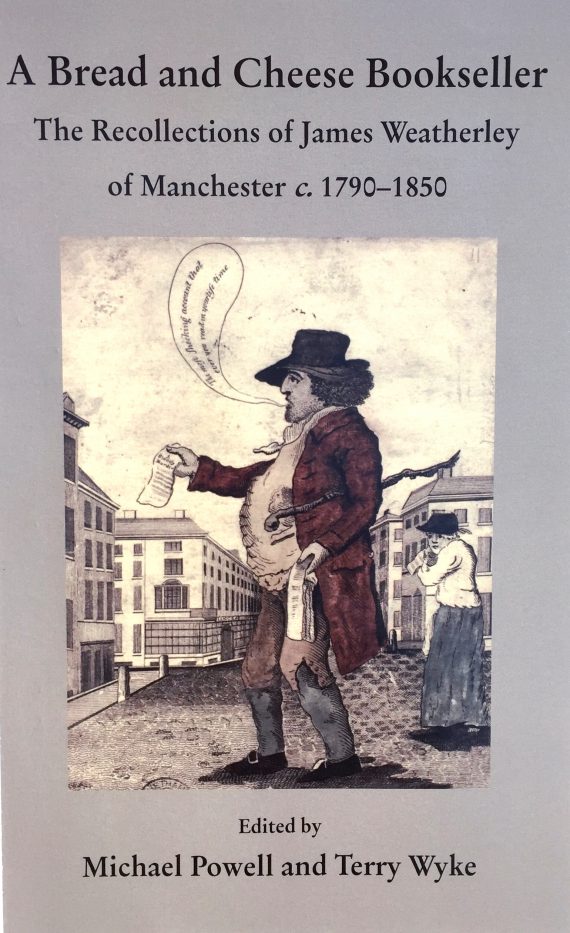 A new work by our late Librarian, Michael Powell and his friend and colleague Terry Wyke One of Michael’s favourite images from the Manchester Scrapbook, a ballad seller

While we as Library staff are always pleased to welcome a new volume from the Chetham Society, which first met at the Library over 170 years ago, we are especially delighted to welcome our copy of A Bread and Cheese Bookseller, the fruit of a long collaboration between our late Librarian, Michael Powell, and his old friend and research colleague, Terry Wyke. It is poignant for us to consider how much Michael would have liked to be here to organise a launch event (we will have one and think of him when times are better), but we can rejoice in the appearance after a long gestation of a work which pays tribute to his scholarship and that of Terry.

Many of Weatherley’s papers, including the crucial account of his own life, are here at Chetham’s Library, and here Michael was able to carve out time away from his many other duties to begin to study this footsoldier of the Manchester booktrade, James Weatherley. Among the unexpected finds in his autobiographical account, Michael picked out and blogged this hitherto unnoticed nugget of evidence about the Peterloo Massacre:

‘The autobiography of James Weatherley, (1794?-1860), a bookseller of Manchester, contains an unpublished eye-witness account of Peterloo. In contrast to the official accounts, Weatherley saw the massacre in personal terms, attributing the main fault to the yeoman trumpeter Meager, who according to Weatherley first began the assault. He records that Meager ‘could never get rest in Manchester after this affair he was annoyed in every place and company in which he went he mostly carried a loaded pistol with him he would as soon shoot a man as a dog…’ Weatherley’s autobiography was acquired by Chetham’s at the sale of James Crossley’s library.’

We thoroughly commend the work to all our readers. You can order a copy from the Chetham Society or from Amazon. Here is the publisher’s blurb (or as a pdf here):

Selling books on the streets of Manchester in the Industrial Revolution

There is no reason why we should ever have heard of James Weatherley.  Like the vast majority of the poor who lived during the industrial revolution, he should have left only the smallest of footprints in the historical record. He was born in Salford workhouse in 1794 and, 66 years later, would have suffered the public shame of a pauper’s funeral had it not been for the kindness of friends. Weatherley lived in Manchester all of his life, spending many of those years selling second-hand books on the streets, close to the Exchange, on the appropriately named Pennyless Hill.

Shortly before his death he was persuaded to write an account of his life. The manuscript was acquired by Chetham’s Library in the 1880s where it has remained unopened and forgotten. It provides one of the very few first-hand accounts of an ordinary working man’s experiences of living through the industrial revolution.

Weatherley, who began working in the cotton factories when a child, was to witness Manchester transformed from a small market town into the ‘the city of tall chimneys’ – a place of extremes that appalled and fascinated observers. When trade was slack in the mills, Weatherley made money by selling Eccles cakes on the streets. Aged 17, he left the mill, having decided to make his living selling books on the street. It was to prove a hard and precarious life, but one which was to bring him into contact with the lower reaches of the book trade and its customers  – the honest and dishonest.

Fortunately, Jem Weatherley was possessed of an exceptional memory, able to recall the details of not only those who had cheated him out of pennies but also those wider events such as the Peterloo Massacre and other protests that came to define Manchester’s history.

Weatherley is a unique voice. His recollections provide a view of history from the gutter rather than simply history from below.

This new volume edited by the late Michael Powell and Terry Wyke provides the full text of Weatherley’s manuscript.

Michael Powell, Librarian of Chetham’s Library, published on local history, the book trade and bibliography of the Manchester region. He was an active member and supporter of many local societies, including the Chetham Society and the Lancashire and Cheshire Antiquarian Society. He died in 2019.
Terry Wyke taught social and economic history at Manchester Metropolitan University, retiring in 2016. His publications focus on the Manchester region including its bibliography, the cotton industry and public monuments. He was a founder editor of the Manchester Region History Review.