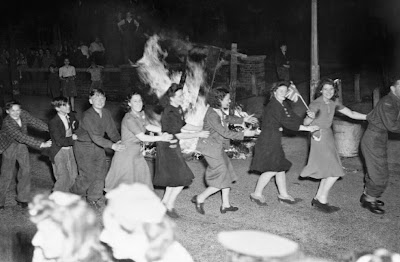 In 2013 the Library was donated a remarkable set of diaries written between 1939 and 2012, chronicling almost the whole of a man’s life. John Reed decided at the age of ten that he would keep a diary: unlike many others he did not give up, but continued to write an entry for almost every day of his life, until shortly before his death in 2012. It runs to hundreds of volumes, tens of thousands of pages and millions of words. On the 70thanniversary of VE Day we thought it would be interesting to share with you some of the earliest diaries and reflect on how wartime Britain looked through a child’s eyes. 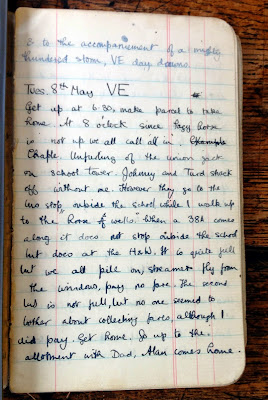 When war was declared in 1939 John and his younger brother Alan were on holiday with their parents in Littlehampton. John’s father was a joiner and the family lived in London. A decision was taken that the children should not return to London where they could face the danger of bombing. They had the great good fortune to have family connections with a village in Oxfordshire. Consequently the boys were able to avoid the often arbitrary decisions of the formal evacuation procedures and to live with people who knew and cared for them. They were also visited regularly by their parents.
John’s diary begins on 26th November 1939. He does not write about how he feels about being away from home and separated from his parents, but describes the day-to-day events of his life. In some ways the early entries read like a description of an extended holiday. The entry for 29th January 1940 is typical:

It snowed during the night and when we went to school their (sic) was only 14 there so we went home. We made a snowman and played fox and hounds in the wood. We played on the toboggan and then played snowballs. I did homework in the evening.

Sometimes the eternal voice of the bored child, familiar to every parent, comes through:
8th February 1940. Nothing much happened today.
When the New Year arrived in 1941 he made a resolution, the second part of which he certainly kept and which set a pattern for the rest of his life.
1st January 1941 New Year Resolution: Not to grumble or be naughty. To finish copying out my diary for 1940.
In September of 1941 John’s life changed dramatically as he won a scholarship to attend a private boarding school near Wood Green in Essex. This brought him much closer to the war. Sleep was often disrupted by regular air raids:
17th May 1943 The sirens went just before midnight. Went down to the shelter. Came up after the all clear went and when the siren sounded for the 2nd time we took the mattresses down and decided to make a night of it.
If John followed the progress of the war he rarely wrote about it. Only occasionally do wider events get mentioned as in this entry for 6thJune 1944, D Day:
Chemistry test (6 questions). Rumours it is D Day in chapel. Cheese for dinner. D Day rumours confirmed. Write lab vocab in the afternoon. Do QWs. Syrup for tea.
However in 1944 the war was never far away as this entry from 26th June 1944 reveals in a way that is both funny and chilling. They are part way through a lesson with their teacher Mr Bloodworth (BW):
I hear a plane and to annoy BW I shriek ‘Sir I think that’s a bug’ [Doodle Bug V1 flying bomb].Bloodworth clouts me for interrupting then to the amazement of all the buzzing gets louder and louder and for fun and by instinct all fling themselves on the floor and to the amazement of all the thing blows up cracking the window. Then we all rush to the window to look out while BW vainly tries to pull us down. I say he punished me for warning of danger. He apologises.
In fact they experienced a near miss in which the village church was hit and other properties in the village were damaged.
By the beginning of May 1945 the diaries are full of anticipation of the end of the conflict in Europe. Seventy years ago when VE Day did arrive young John was not about to miss out on the celebrations. On May 8th he caught a bus back to London to be with his family. The bus was trailing streamers and no one bothered to collect the fares. Once back in London he and his family decided to join the celebrations in the West End. The journey from home took them through some of the poorer districts of London where he notes that the celebrations make those of the suburbs ‘look tawdry’ by comparison:
As we ride we see the bonfires in the side streets begin to blaze. We reach Whitehall where the crowds are solid. Bands are playing, people sit on bus shelters, there is singing and we all join hands to avoid being separated. We walk and are swept down the road, singing, until we reach Trafalgar Square. The column steps are covered, the Square packed, and the floodlights giving a milky water light are fed by humming dynamos … sailors in various stages of undress paddle in the fountain and a soldier clad only in trousers leaps off the top into the pond around the base. Great fireworks streak across the sky, red and white. We walk down toward the Palace lights, blazes, braziers, people dancing on the roofs of ARP shelters, jumping fireworks, people dressing statues and lip sticking them … The crowd cries and cheers for the King, sing the National Anthem and cheer and clap for half an hour. We are just going away disappointed when the little window behind the balcony lights up and on the balcony appears the Monarch and others. The crowd flattens itself against the railings and cheers madly. I put away my anarchistic views for a moment and become a monarchist and cheer. We have to walk home miles and miles. It is one o’clock and the last people are staggering home from the pubs, parties are blazing behind windows and bonfires are dying neglected and alone. Home at ten past two, supper and bed.