A new world of words 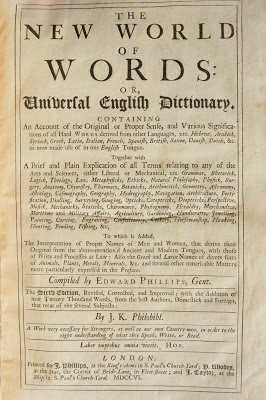 In addition to the recent gift of John Reed’s diaries, the library has also been given books from Reed’s personal collection, including some early printed books. Amongst these are several dictionaries, two of which we found particularly interesting.
The first is the sixth (1706) edition of a work first published in 1658 by Edward Phillips, who was a nephew of the poet John Milton. The book was given the ambitious title The New World of English Words or a Universal English Dictionary. Unfortunately, the work was not in fact entirely ‘new’ – Phillips had shamelessly plundered much of it from Thomas Blount’s 1656 Glossographia or A Dictionary Interpreting All Such Hard Words… Blount was furious and in 1673 published A World of Errors Discovered in the New World of Words…
The oldest dictionary in Reed’s collection is the Lexicon Tetraglotton(1660) a dictionary in four languages with ‘another volume of the choicest proverbs’ which declares on the title page that it was produced by the ‘Labours and Lucubrations’ of James Howell. 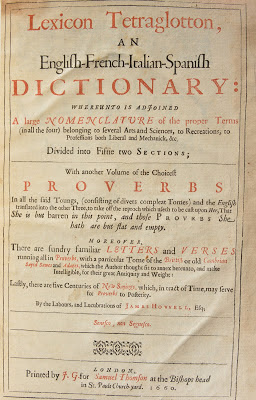 Howell (1594?-1666) is described as a ‘historian and political writer’. For much of his career he aspired to a position of influence and assured income and to this end tried to present himself as a moderate to both Royalists and Roundheads, though with a singular lack of success. He wrote and published a variety of material to support himself financially and finally achieved the position of ‘Historiographer Royal’ to Charles II for the last few years of his life.
Howell’s Dictionary is divided into several sections of varying usefulness. Certainly nobody should have to manage without his list of ‘Reproachfull, reviling, infamous or opprobrious Terms’, although ‘The Degrees or differences of Ages and Persons’ makes unsettling reading, being as it is rather specific in defining the Seven Ages of Man. Some members of Library staff were concerned to read that ‘manhood or virility’ lasts only from age forty two to fifty six, closely followed by ‘old age’ from fifty six to sixty eight and the crushing news that retirement may be largely taken up with ‘decrepitness, or doting old age, till death’. 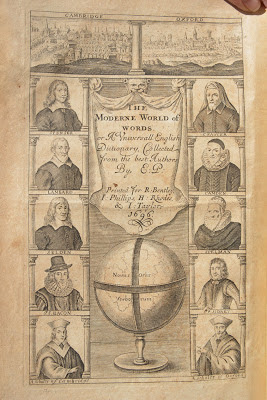 We shall be posting a few choice proverbs from the Lexicon Tetraglotton on Twitter so keep an eye open for them!