A terrible night for Manchester 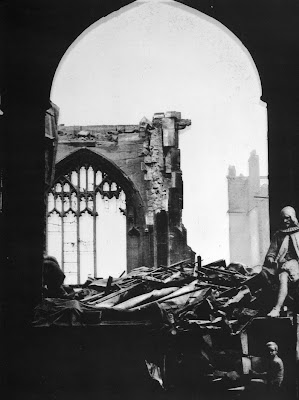 Next week is the 70th anniversary of the Manchester and Salford Blitz in 1940, when the two cities experienced the heaviest bombing of WW2, killing nearly a thousand people.

Recent research for the Leech family exhibition has brought to light a new and unpublished eyewitness account of the bombing, which appears in a diary belonging to Ernest Bosdin Leech (1875-1950), Honorary Physician at Manchester Infirmary and resident of Victoria Park. His account reads as follows:

“It has been a terrible night for Manchester, and it is only just come to us what has been done. The Free Trade hall is a shell, and the big warehouse behind it across Windmill Street is the same. It was smoking as I passed it and they were pouring water into it. The Royal Exchange has also gone; I am told also the Victoria Hotel and parts of the Cathedral. Deansgate is badly hit, I’m told. The building between Lewis’s and the Piccadilly garden is also a shell; also a big warehouse in Portland Street near Princes Street (left side looking down). The building across Mosley Street from the Art gallery, that was the place one paid taxes is also burnt out. Lots of the streets have water pipes along them. So much for the town. The big bang last night was an explosion at the Longsight entrance of the Park, some 250 yards away, which knocked down about half the large house on the left near the entrance. The part behind is desolation and the street, Plymouth Grove, full of debris. They are demolishing the big house just to the left along Plymouth Grove. About half the windows in Stockport Road are broken and, all along, there are heaps of broken glass. In lots of places main roads are blocked and one has to go by devious ways. Oxford Road and Stockport Road are both blocked … It’s hard to think it’s not a dream; our Free Trade Hall, our Royal Exchange, and our Cathedral. Pray God we may win this war.”

The following day, Leech drove through the town surveying the damage. The round trip from Victoria Park to Victoria Station took over three hours:

“My chief view was of broken windows, occasional burnt out shops and heaps, for I had to keep my eyes on the preceding car and on the glass in the road. The whole way along it was the same; but what glimpses I did get of the bigger buildings was sad; huge buildings all burnt out, some of them still smouldering and occasionally flames rising out of them. I saw the Cathedral which has been knocked about, but I could not see the damage, the outline was not so bad…”

After the war the Cathedral was rebuilt and the statue of Chetham was moved from its place at the east end of the north aisle of the choir to its new home in the North West corner. Though some repairs were carried out to the damaged statute, it still shows the marks of the blitz, notably a sizeable hole to Chetham’s left knee, and serves as an obscure yet permanent memorial and reminder of the damage that the Cathedral suffered some seventy years ago. 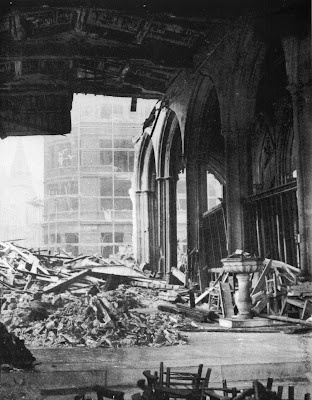