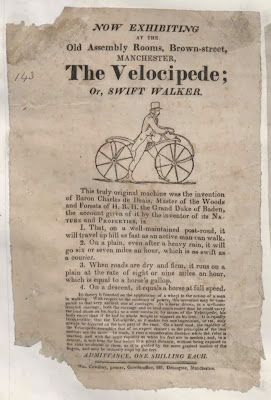 This splendid broadside of 1819, published by William Cowdroy, advertises an exhibition in Manchester of a velocipede or swift walker, a forerunner of the bicycle. It was produced for the London coachmaker Denis Johnson who had taken out a patent for a ‘pedestrian curricle’ in December 1818. Johnson made several hundred machines (often popularly referred to as ‘hobby-horses’ but more respectfully ‘velocipedes’) in the early part of the following year and during April and May his son John Johnson toured England displaying the machines and giving riding lessons. Johnson visited Bristol, Bath, Manchester, Leeds, Birmingham and eventually moved north again to Liverpool. He probably visited other cities as well on his lengthy tour. Despite all this energetic advertising, for a variety of reasons the hobby-horse velocipede began to fall out of favour in the latter part of the year 1819.

The broadside is one of a number of items devoted broadly to the theme of entertainment in the Cambrics Scrapbook, a scrapbook containing over 250 items of local single-sheet printing. We are very grateful to the cycle historian Roger Street, whose work Dashing Dandies: The English Hobby-horse Craze of 1819 tells the story of Johnson’s machines and sets this single Manchester broadside in context.