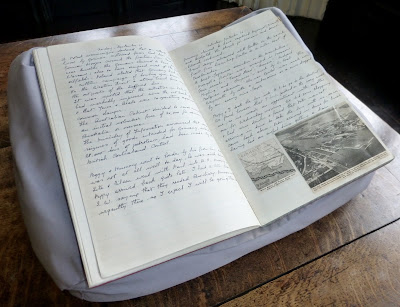 Amongst the manuscript volumes housed in the library there sits a fascinating record of the early months of World War Two. The journal was written by a young lady but her identity is unknown. Within the pages of a large notebook she detailed political developments from Wednesday 23 August to Thursday 30 November 1939. What make this volume particularly poignant is the author’s inclusion of brief diary entries alongside her detailed record of the cataclysmic events being played out on the world stage. Her entry for Saturday 26 August is a perfect example of this:

‘Sir Neville Henderson flew to London with a message from Hitler. The reply was considered at a meeting of the Cabinet at which Sir Nevile was present. Hitler received the French Ambassador after day of consultation with his advisers. The Nazi Party “Congress of Peace” at Nuremberg was cancelled. Germany gave assurances of respect for the frontier of Belgium, Holland and Switzerland. Further messages exchanged between Hitler and Mussolini. Roosevelt made a second appeal to Hitler for the maintenance of peace, enclosing the reply from the Polish President.

We went down to the farm for the week-end and Peggy went away with Keith.’

Daily life was already being affected, and the following day she travels back to London during a blackout:

‘Mother and I returned to London by train. Rather eerie as we could not even see each other in the train.’ 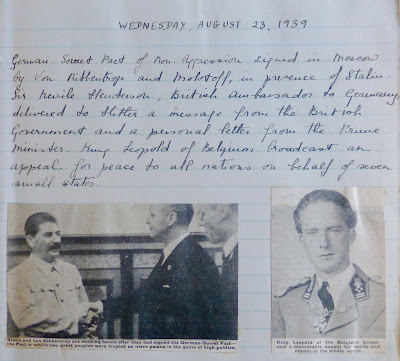 Cuttings from newspapers and magazines fill the journal, illustrating the author’s commentary. These include reference maps of Central Europe and the Western Front showing the Maginot and Siegfried lines. She also includes four cuttings of cartoons, light relief amidst the rest of the content. 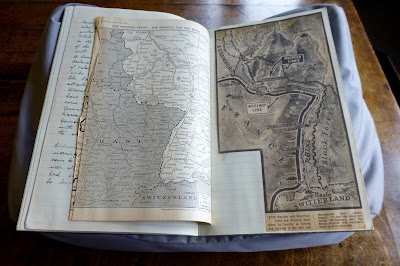 On Friday 1 and Saturday 2 September 1939 she reports

‘The evacuation of British school children from exposed and congested areas was begun, and nearly 500,000 were moved … Peggy, Eileen and I drove down to the village, as Eileen had promised to help with the 60 evacuated children who arrived here today … Eileen drove the children to their homes.’

The following day the family

‘Went round the house doing all the windows with black paper etc.’

Three days later there was an air-raid warning

‘all congregated in the dining room. Two alarms given within half an hour of each other – saw fighting overhead.’ 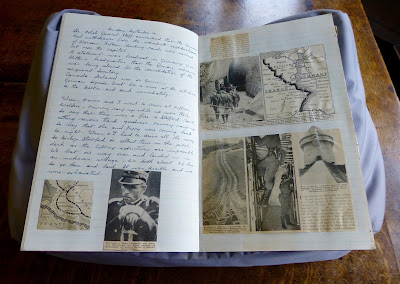 The authoress signs up to become an auxiliary nurse and begins first aid training. Her final entry in her exercise book, dated Thursday 30 November 1939, contains details of R.A.F. fighter planes chasing enemy aircraft, the sinking of an enemy submarine, and the loss of the H.M.S. Rawalpindi:

‘Reported that two British destroyers, one towing a damaged submarine, had anchored off Mastrafjord, near Stavanger. The destroyers left later, and the submarine was taken to a shipyard for repairs. Admiralty announced the names of 39 officers and 226 ratings missing as result of loss of H.M.S. “Rawalpindi” … Mother and Peggy went to town as Keith had leave again … Practised bandages all the evening.’