One of the rewards of volunteering at Chetham’s Library is the opportunity to be the first to see some of the latest acquisitions. We recently received, by kind donation of the family of Mr Albert Bracegirdle DFM, a journal account of his experience as a prisoner of war during the period 1944/45. It was my privilege to read it. 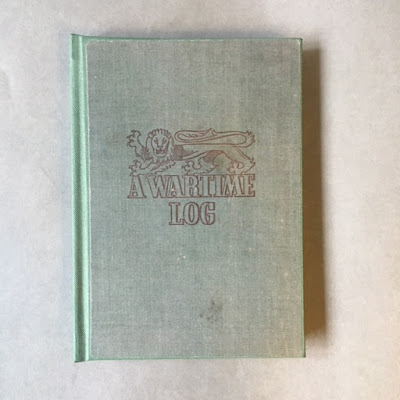 In 1944 Albert Bracegirdle was an RAF Flight Sergeant, an air gunner in a Lancaster bomber. He had served in this role with distinction, flying many missions over occupied Europe and Germany itself. The mission over the Rhur Valley on 21 June 1944 was to be his last. On that night the German defences were particularly effective and night fighters inflicted many casualties on the British bombers. At 01:30 on the morning of 22 June his aircraft was hit and plummeted toward the ground. The order to bale out was given and with great difficulty, struggling against the centrifugal forces, he was able to escape the aircraft, trusting his life to a few square yards of silk 17,000 feet above Germany. Ironically, many months later, he was to learn that the pilot was able to regain control of the craft just before it hit the ground and that his comrades who were unable to bail out returned to their base safely.

Unfortunately, he received a blow to the head when exiting the plane and was forced to surrender to the German authorities in order to receive medical treatment. Shortly after his captivity began, he was given a notebook by the Red Cross, in which he kept a diary throughout his captivity. It is that journal that is now held at Chetham’s Library. Despite extraordinary circumstances and at times desperate hardship, he wrote throughout this period in a strong and legible hand. He begins his story with a retrospective account of his final mission and of his encounter with German civilians and police before he was taken into custody by the Gestapo. He spent the next six months at a prison camp near the town of Bankau in Silesia, Stalag Luft VII. 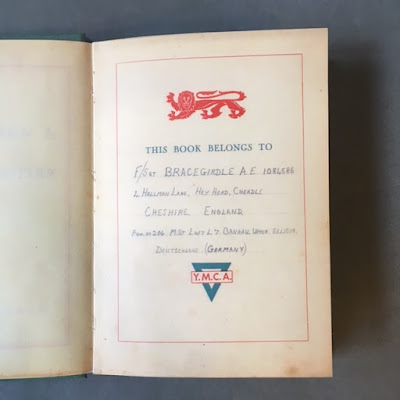 At first his account of life in the camp seems broadly similar to the images that are so familiar to us from various films set in prison camps. He describes scenes of domesticity, eking out inadequate rations with Red Cross parcels and combatting boredom through competitive sport and educational classes (they had over forty subjects to choose from, all devised and led by fellow prisoners). However, this veneer was sometimes broken quite dramatically as in the incident which occurred on 9 August:

We had a bit of excitement today when a member of the cricket team whilst fielding a ball forgot that we ar’nt [sic] allowed to cross the first fence. The jerry guard immediately fired but missed fortunately. I’ll bet nobody else forgets the first fence in future. 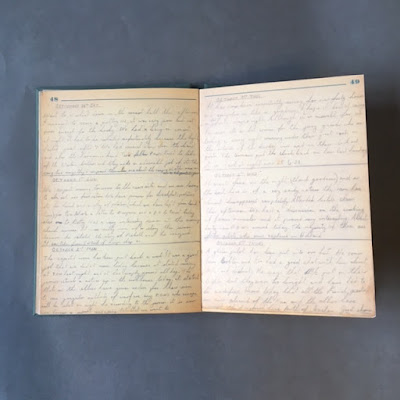 His account of prison life sometimes underplayed just how basic conditions were. In September he contracted dysentery which was rife amongst the prisoners. By November, hopes had arisen that the end of the war was in sight as the Red Army grew closer. However, the guards grew increasingly edgy in the face of the relentless Russian advance and there were persistent rumours of the imminent evacuation of the camp. Throughout November and December, the weather became increasingly cold. On 27 December a young Canadian was shot dead when he mistakenly left his hut to use the toilets during an air raid. This was a portent of a very dark period for the prisoners.

On 19 January 1945 at 05:30 the long anticipated evacuation of the camp began at the height of one of the coldest winters of the twentieth century. For reasons that remain unclear the Germans decided that all prisoners should be moved west away from the liberating Red Army. Hundreds of thousands of allied prisoners, concentration camp prisoners and forced labourers, joined the huge numbers of German civilians who were walking to the west. This was a forced march on an epic scale, called by some ‘The Long March’ or ‘The Long Walk’, or, with good reason, ‘The Death March’. Albert Bracegirdle describes it simply as ‘The Retreat from Bankau’, and was there in its midst, a small part of a sea of humanity ebbing and flowing across Europe as the Germans were forced westward by an avenging Russian army. 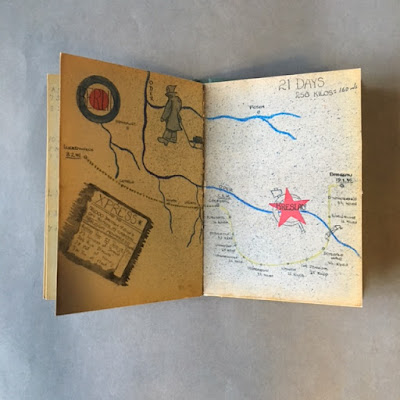 From 19 January to 5 February he walked, ill clad and undernourished. He walked hundreds of kilometres through sub-zero temperatures, through gale force winds that created blizzards and huge drifts of snow. Carrying everything he possessed he walked day after day on ice-covered roads that made every step of the way an ordeal. Somehow throughout this period he continued to find the energy to write. On 28 January, day ten of the walk, he wrote:

After a very few hours of troubled sleep we were awakened at 3am and by 5am we were once on the road, heading this time for the town of Stanhof 24 kilos [sic] away. The wind had freshened during the night and we had to plough our way through quite a depth of snow in places. On either side of the road were huge drifts of snow some of them 10 feet deep and as far as the eye could see was just a vast expanse of white only broken by trees and hedgerows and a very occasional building … I was feeling all in long before the half way mark was reached and it needed all the will power I could muster to keep up with the main body who by this time were stretched over a great length of road. My whole body was aching and my muscles in my thighs and calves were paining me with every step. The blanket carrying the majority of my kit which I carried on my shoulders made them ache until I felt as though red hot blades were being placed between my shoulder blades. I thanked the Lord when we eventually staggered into Stanhof that he had given me the strength to reach the end of that day’s march. 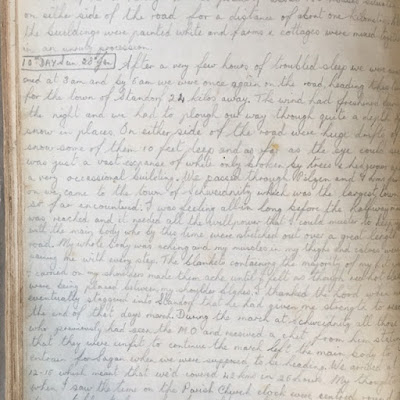 On 5 February they arrived at a railhead and the walk was over as they were transported to their final destination by train. Even this turned into an ordeal however, as in their exhausted and debilitated condition they spent 46 hours locked in cattle trucks without food or water.

The new camp, Stalag IIIA at Luckenwald, about 30km South of Berlin, was huge with many nationalities. Life here was grim. At this stage of the war rations were continually being cut to below subsistence level. Prisoners relied upon Red Cross parcels simply to survive. On 20 April the German guards simply abandoned the camp. The prisoners woke one morning to find them gone. He writes vividly of the atmosphere that day. However, when the Red Army arrived the following day they brought something less than liberation. Prisoners were ordered to remain within the camp for their own safety. Three Frenchmen ignored these orders and were duly shot by the Russians. The Russian army refused to recognise the French and Italian prisoners at the camp as allies and consequently declined to provide them with rations. As a result, the British and American prisoners felt obliged to share their limited supplies with their French and Italian fellow prisoners. The Russian POWs were marched out of the camp within hours of the arrival of the Red Army, and Albert Bracegirdle believed they were fortunate to be on their way home so soon. With the benefit of hindsight of course we know their fate was likely to have been much worse than this.

It was not until 25 May, over two weeks after VE Day, that Albert Bracegirdle was finally airlifted to Brussels and on 27 May was finally reunited with his family. Throughout the diary he wrote of his love for his family and his fiancé. Albert Bracegirdle’s story is one of enduring courage in the face of unimaginable hardship. His courage was bolstered by deep-rooted comradeship and based upon the foundations of faith in God, the bonds of family and the love of a man for a woman. The day after he returned to his family he was reunited with his beloved fiancé Marjorie. The diary ends with this line:

I met Marj at 1.15 the next afternoon at the bus stop and holding her in my arms I knew that my cup of happiness was full. 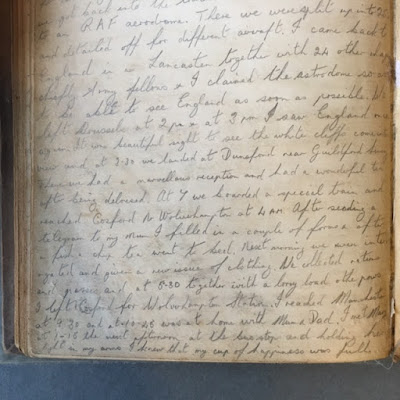