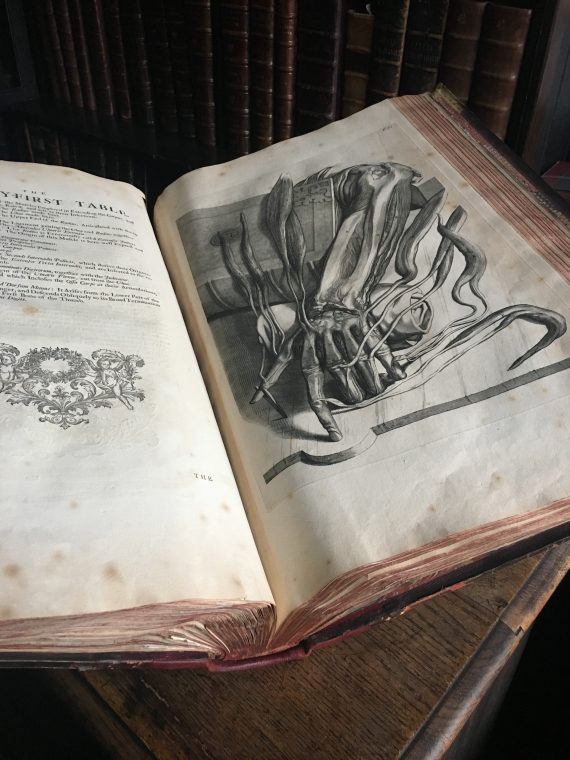 During their residency of exploration and study, Brass Art spent time looking at the Library’s collection of works on human anatomy, chiefly William Cowper’s The anatomy of humane bodies (Oxford: 1698). The work itself is largely a piece of plagiarism. Cowper acquired the plates, which had previously appeared in Govard Bidloo’s Anatomia humani corporis, published in Leiden in 1685, and simply added his own text. But the resulting volume was instrumental in changing the standard approach to the study of anatomy and the practice of surgery. Designed for collective use in the anatomy theatre, Cowper’s work is extraordinarily large in size, measuring around 36 x 60 cm and weighing 9 kilograms. It contains 114 illustrations printed from copperplate engravings that offered the anatomist a set of visual aids that depicted in vivid detail the dissected body on the operating slab. This giant work is much than a simple set of medical illustrations, and demonstrates an awareness of itself – the material book – as technology. For the exhibition, Brass Art worked with the image from Table 71, which shows an anatomised life sized forearm emerging from a large folio volume, and created a digital print of the image onto silk Georgette, a lightweight dull-finished crepe fabric. The image is a visual pun, a way of reflecting on how we use books for representing the body: the index finger of the hand points down in a gesture of emphasis at the page of Cowper’s Anatomy, on which the image of the arm and the book is printed, continuing the circular argument. The book essentially points to itself.

What an image. A flayed arm with all of its muscles and tendons exposed that is both alive and with an afterlife of its own: anatomy as art.