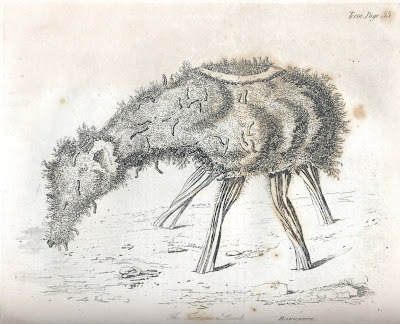 Despite its sheep-like appearance, our latest ‘monstrum’ is a member of the vegetable family. This 18th-century engraving shows Polypodium barometz, a fern native to China, whose animal-like appearance and distant location caused much wonder and excitement among European travellers returning from the East, who reported stories of a fantastical plant/animal hybrid.

The Bodleian counted among its treasure a coat supposedly made from the skins of such wonderful creatures, known as vegetable lambs of Tartary or Scythian lambs. These reports caused much debate among seventeenth- and eighteenth-century botanists. Sir John Sloan wrote a definitive memoir about it for the Royal Society in 1699, firmly relgating the fern to the plant kingdom.

Our engraving is from another work written for the Royal Society, Terra: a philosophical discourse of Earth, by the noted diarist John Evelyn. This 1825 London printing of the York fifth edition also includes Silva, Evelyn’s discourse of forest-trees, and includes notes on both works by Alexander Hunter. Hunter expands on Evelyn’s passing reference to the ‘Scythian lamb’ as one of a number of plants which ‘destroy the vegetable virtue where they grow’. He is at pains to point out that the image shown here, taken from Mrs Blackwell’s Herbal, was chosen because others have “too much the appearance of fancy”. The Natural History Museum Picture Library includes several of the more fanciful images of this plant as well as a startlingly lamb-like photograph.