‘Anne Walne is a witch and hath killd my chilld’ 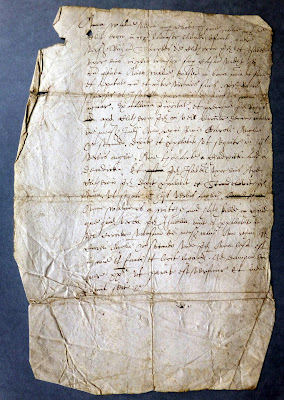 A fascinating manuscript document associated with witchcraft in the Pendle area has recently come to light at the Library. One of our regular archive assistants, Robert Stansfield, has been working on a collection of seventeenth-century material from the Borough and Church Courts of Clitheroe, and came across this accusation of witchcraft from 1626, some fourteen years after the celebrated Pendle Witch Trial. Here is Robert’s account of the document:
In a case brought before the Borough Court of Clitheroe in 1626, Anna Walne, the widow of the labourer Thomas Walne of Clitheroe accused Richard Sharples of Clitheroe and his wife, Isabel, of destroying her good name, fame and reputation through their malicious thoughts and words.

At Clitheroe on or around 10 July 1626, Richard had said to Anna ‘thou arte a Chadwicke and a Demdicke [Demdyke]’. Chadwick and Demdike clearly refer to the Pendle Witches, Alice Chadwick or Chattox and Elizabeth Southerns alias Demdike, who were tried for witchcraft only fourteen years earlier, in 1612.

On around 20 May 1626, Richard’s wife, Isabel, had also said that ‘Anne Walne is a witch and hath killd my chilld’. The Borough Court judged that Anne had brought a legitimate case and she was awarded damages amounting to £20.

The evidence of the parish registers of Clitheroe reveal that a Thomas Walne (or Waune) married Anna Daye on 23 October 1616 at St Mary’s Parish Church. Also, a Thomas Waune was buried there on 10 October 1623. Anna had therefore been a widow for only a few years when she brought this case to the Borough Court, presumably because of a fear of being tried for witchcraft.

Richard Sharples married Isabel Booth at Clitheroe Parish Church on 24 June 1624. The child who Anne Walne was supposed to have killed may have been Richard son of Richard Sharples who was buried on 16 March 1626. He may have been their first-born child, but it seems that the couple went on to have another son, Richard, who was baptised in April 1627.

The close-up view below shows lines thirteen to sixteen of the document with the word ‘Demdike’ in line thirteen and the phrase ‘Anne Walne is a witch and hath killd my chilld’ in line sixteen: