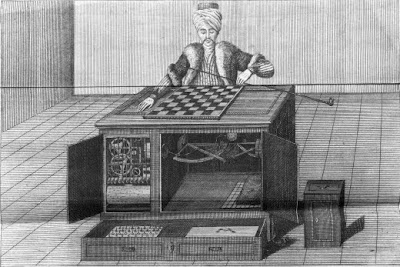 As the magic of the season begins to fall, we are reminded of the importance of enchantment, deception and curiosities in the making of holidays and special occasions. In this post-modern age, it is difficult to be truly amazed or mystified but in times past, oddities and magical events were part of everyday life. Everything seemed new and exciting and often quite unexplainable, leading the observer to assume magic or divine intervention.

Even someone as apparently worldly wise as Benjamin Franklin, it seems, was able be fooled once in a while. On a visit to Paris in the late nineteenth century he was unable to resist the opportunity to challenge the remarkable mechanical curiosity known as Kempelen’s Chess-Playing Turk. Underneath an ‘imposing turban that added to both his high stature and his mystique’, an automated man sat behind a cabinet with doors that stood open before each match to disprove any scepticism about its contents. The appearance of the Turk caused enormous excitement wherever it went, as people attempted to beat the oddity at a game of chess. What they didn’t know, of course, was that Kempelen had hidden a short and very astute chess player to sit in the cabinet for hours on end to move the pieces about with a magnet. Predictably, Franklin lost the match.

The obsession with Kempelen’s Turk began at the court of Empress Maria Theresa in 1769 and lasted for many years, even crossing the Atlantic Ocean. Kempelen made his fortune, which he used to develop a machine that could replicate human speech, and sold the Turk.

Over the years, many people had a go at owning and displaying the Turk, but mostly people made one-off replicas of it and began to travel with those. None of the replicas were as famous as the original, but the copied concept kept the chess-playing Turk’s novelty fresh and exciting even after the original burned in 1853.

An original broadside advertisment for Kempelen’s Turk in Manchester can currently be seen at the Library as part of the Central Library collection, which includes many others with similarly obscure content. One of our favourites is the Learned Pig, which became so popular that it was duplicated many times over, sometimes with more than one pig in the same performance. The Learned Pig routine captured the attention of audiences for even longer than the Turk, and the epithet ‘smart swine’ is still sometimes used. 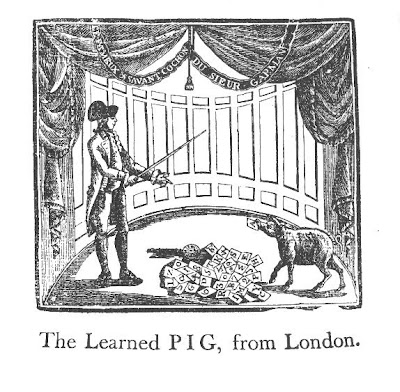 Hopefully you’ll find some magic this holiday season. But if you need a bit of inspiration, the library is always a good place to start. The Turk itself inspired quite a following including P.T. Barnum, the Reverend Edmund Cartwright, who went on to invent the powerloom, and Joseph Faber whose Euphonia was able to sing God Save the Queen.

We are grateful to Tonya Albert for researching and writing this post. Tonya is currently doing a postgraduate placement at the Library and has been working on the Central Library collection.