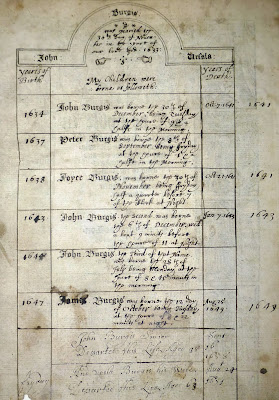 The use of a large family Bible to record the dates of births and deaths may not be especially unusual, but this Great Bible of 1553 goes one step further. The owner John Burgis has recorded not only the date but the precise time of birth of his six children, a much less common practice and one which perhaps offers some clues to the character of the man himself, who must have been at home for the births, as well as being the owner of some kind of timepiece.

Although nothing further is known of the Burgis family, this peculiarly detailed memento of these eight lives and six sad deaths is more than a little touching.