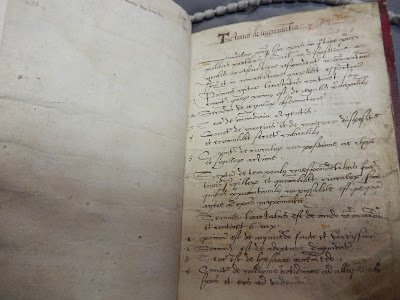 We are delighted to publish a guest post by Stephen Gordon, a post-doctoral research associate who has been researching the Tractatus de Nigromatia here at Chetham’s Library. Foliation is Stephen’s own.

The Tractatus de Nigromatia is one of the most interesting and puzzling items in the Chetham’s collection. As suggested by its title, the Tractatus is a book of necromancy. In the Classical tradition, the term was used to describe the act of divination (mantia) through the conjuration of the dead (nekros). In the medieval and early modern world, ‘necromancy’ (corrupted here into ‘nigromatia’) referred to the more generalised concept of the conjuration of demons, although this did not mean that practitioners of ritual magic did not also call upon other kinds of spirits. 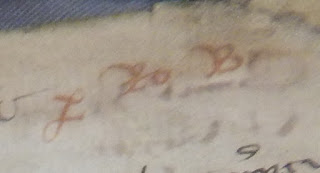 The provenance of the Latin portion of the text (that is to say, the Tractatus itself rather than the English additions) is difficult to ascertain. As noted in the top right-hand corner of the title page, it has sometimes been attributed to Roger Bacon (d.1292), the Franciscan friar and philosopher whose reputation as a practitioner of dubious magic only increased in the centuries following his death. It was a common practice to ascribe the authorship of necromantic handbooks to famous magicians, usually as a way of bestowing a sense of authority on the text. To muddy the waters still further, the Tractatus also circulated as the Thesaurus Spirituum (‘Storehouse of Spirits’), the title by which it was mentioned in Johannes Trithemius’ catalogue of books of black magic, the Antipalus Maleficiorum (‘Enemy of Witchcraft’, c.1508). Trithemius records that the author of the work was a certain ‘Rupertus Lombardus’. Other versions of the text give the author as ‘Robert Lombard’ (British Library Sloane MS 3885) and ‘Robertum Furconem’ (Sloane MS 3853). Still some testified that the prototype copy came from Alexandria. Providing the Latin ‘translation’ with an ‘ancient’, non-Christian provenance was another form of textual validation.

The evidence indicates that the Chetham’s copy was written in the latter half of the sixteenth century. Its status as a working manuscript can be confirmed by the wear and tear on the pages and its transcription in a rough secretary hand. The practical − perhaps secretive − usage of the text may explain its absence from the historical record until it became part of the library of the noted poet and stenographer, John Byrom (1692–1763). Best known for developing a system of shorthand writing that remained in use well into the nineteenth century, Byrom also maintained a keen interest in the occult. His membership of the so-called ‘Cabala Club’ (as mentioned in his diary entries for 25 February and 9 March, 1725) and friendship with prominent Freemasons such as the mathematician Martin Folkes (1690–1754) and the royal physician, Sir Hans Sloane (1660–1753), certainly point towards  an affinity for the arcane. While Byrom’s diaries give no account of his purchase of the Tractatus (or, indeed, any other books of necromancy), they nonetheless mention his familiarity with the Cabala, numerology, and other such mystical textbooks. Byrom, then, may have had more than just a passing interest in the Tractatus’ contents. 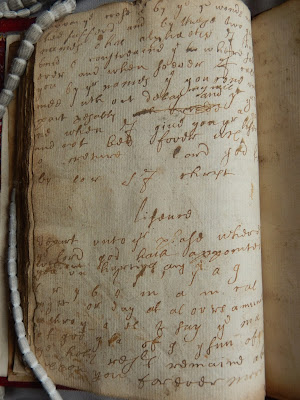 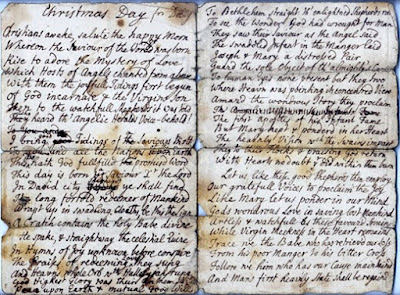 Handwriting comparison between John Byrom’s autograph copy of ‘Christians Awake’ and one of the English conjurations from the Tractatus de Nigromatia fol. 40v

The contents of the extant versions of the Tractatus are just as fluid and unstable as the identity of the text’s author. No two books of necromancy were ever truly the same, with the experiments contained within often changing depending on the aims, interests, and intentions the owner/copier. While grimoires could be copied by rote or abide by a known textual template, sometimes the changes to the text could be so severe that only the title remained the same. Most books of necromancy occupied a place between these two extremes. The Chetham’s Tractatus is no exception, with the ‘template’ text interspersed with prayers, astrological tables, and invocations in English, some of which are likely to have been later additions. While it is tempting to speculate that some of the extra material was written in Byrom’s own hand, a comparison with another Chetham’s Library ‘treasure’ – the 1749 autograph copy of Byrom’s hymn, Christians Awake – makes this seem tenuous at best (see above). 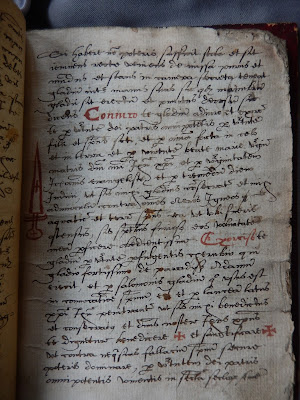 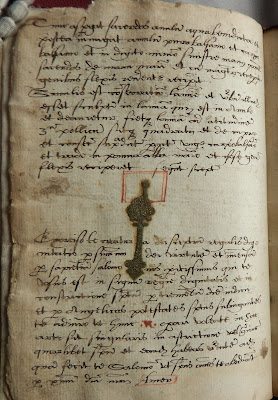 Across its various incarnations, the Tractus de Nigromatia was one of the most popular and widely read books of magic in the medieval and early modern periods. It is a stereotypical example of a necromantic textbook. The images above are taken from one of the preparatory rituals that had to be undertaken before the conjurations could commence. The text describes how the magician had to consecrate and spiritually cleanse the ritual paraphernalia to be used in the experiments. These included a copper plate inscribed with a pentangle, a signet ring, sceptre, and a sword (pictured).  To aid the process, the experiments also had to be conducted at astrologically efficacious times of the day, month and year, with the magician also being advised to use holy names in his magic circles, to prevent the conjured spirits from answering falsehoods instead of truths. The left-hand page, below, shows a rendering of the Tetragrammaton (the Hebrew name of God transliterated from YHWH, or יהוה), while the right lists the characters of the planets. 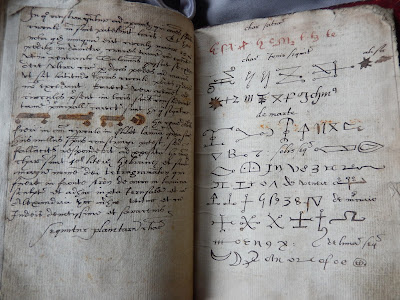 Fol. 8v-9r: Preparatory instructions and the sigils of the planets.

Astral magic was a prominent feature of necromancy. The page below, written in English and inserted between two Latin experiments near the beginning of the text, shows a rough version of a zodiac table, with each zodiac sign assigned to a particular cardinal direction/wind. The second row from the top, for example, indicates that Virgo, Capricorn and Taurus were assigned to the southerly direction. This information, while part of the common repertoire of astrological knowledge, may well have been taken from the influential and widely-read De Occulta Philosophia (1531) of Heinrich Cornelius Agrippa (1485–1535). 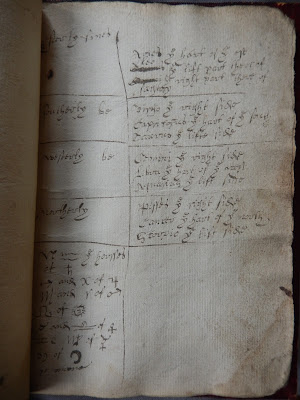 Fol. 28r: Zodiac table in a rough, cursive hand. Note the symbols of the planets in the bottom left hand corner of the page

One of the most complicated experiments in the Tractatus concerns the operation to create an oil to allow the magician to see and converse with spirits (see below). The magic circle comprises two concentric rings traced out in chalk, the outer of which should be a maximum of fifteen feet in diameter. Within this band, the names of Jesus Christ, and Saints Mary, Peter, Paul, Lawrence and John the Baptist should be inscribed. The names of the archangels Michael, Gabriel and Raphael should be written within the borders of the triangle, along with stylised representations of the Tetragrammaton. Deus Spiritus Sanctus (‘God the Holy Spirit) and Deus Pater (‘God the Father’) should be written in the space between the circle and triangle. The objects in the centre of the circle relate to the items to be used during the experiment. 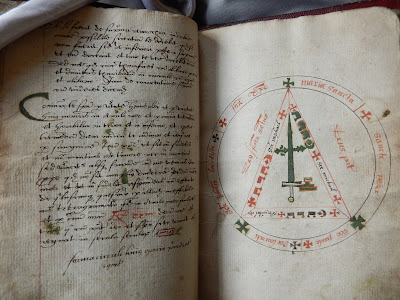 Fols. 31v-32r: The conjurations and the circle for the experiment to create a vial of magic oil

In brief, the magician must first create an unguent by adding various esoteric ingredients to a portion of oil. This concoction should then be placed in a glass vial and taken into the centre of the circle, along with a piece of clean copper and the consecrated items mentioned above. Following the recitation of a lengthy conjuration, the magician is then advised to place the sceptre and sword on the ground in the shape of a cross, adjacent to the vial of oil (as depicted in the diagram). Ultimately, spirits of the air will arrive to anoint the oil, the application of which in the magician’s eyes will allow him to see, hear, and converse with them on a regular basis. The inscription along the bottom of the left-hand page refers to the image on the opposite page and states, roughly, that ‘this is the form the circle should take’. Similar experiments to create magical oils can be found in other versions of the Tractatus/Thesaurus Spirituum, including Sloane MSS 3853 and 3885. Folger Shakespeare Library MS V.b.26 (c.1577–83), a manuscript that is contemporaneous to the Chetham’s text and written mostly in English, also contains a formula to create ‘a rare and excellent’ oil to see spirits of the air. 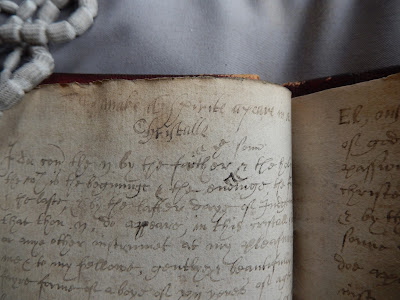 Fol. 51v: English conjuration to communicate with a spirit using a crystal

The Chetham Tractatus contains additional material that betrays the copyist’s own personal interests. The experiment ‘to make a spirit appear in a crystal’, above, was a common form of divination, one that was made famous by John Dee and his scryer (medium) Edward Kelley, who spent many years communicating with angels. 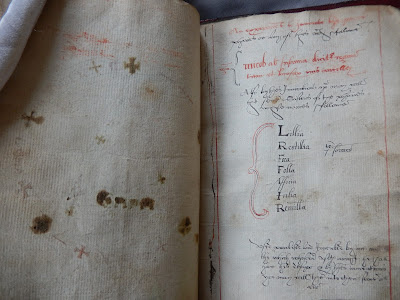 Fol. 37r: The Operation to conjure Micob and the Seven Sisters of the Fairy Court 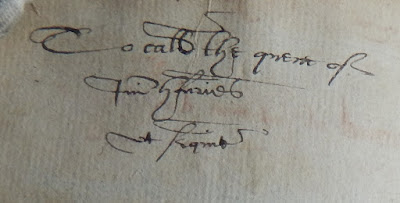 Fol. 37v: Note in English, ‘to call the queen of the pharies’

Angels and demons weren’t the only type of spirit that could be conjured. Fairies were a separate albeit related class of supernatural entity, whose ambiguous status in the eyes of the Church meant that their use in magical rites had much less negative connotations than those involving demons. Operations to conjure fairy folk increased in popularity in the fifteenth and sixteenth centuries, suggestive of the diffusion of popular beliefs into the learned sphere, the influence of literary sources such as A Midsummer Night’s Dream (c.1590s), and the percolation of the knowledge of necromancy to all levels of English society. The images above detail the experiment to conjure ‘Micob’, the queen of the fairies, and the ‘Seven Sisters’ of her royal court. Folger Shakespeare Library MS V.b.26 also includes reference to the ‘Seven Sisters of the Fairies’ (fol. 67).

Ultimately, books of necromancy should not be seen as static, stately objects, curated rather than used. They were practical manuals that helped the operator achieve practical outcomes. While the convoluted textual history of the Tractatus de Nigromatia (Thesaurus Spirituum) must indeed be acknowledged, the fluid nature of the text’s dissemination exemplifies the inventiveness of the early modern magical practitioner. John Byrom’s copy of the Tractatus contains many of the experiments found in the ‘template’ medieval text, albeit with some notable additions, redactions and amendments. The inclusion of astrological tables, vernacular invocations, and rites involving the ‘Queen of the Fairies’ speaks to the idiosyncratic character of the original owner: an Englishman, conversant in the traditions of magical theory, with a secondary interest in the beliefs of the common folk.  In any case, the Tractatus de Nigromatia provides a tantalising glimpse into a belief system where supernatural agents were seen to hold a powerful, active influence in the world

Stephen Gordon is a Postdoctoral Research Associate on Jennifer Spinks’s Arts and Humanities Research Council-funded project ‘Magic, Diabolism, and Global Religion in European Print Culture, 1500-1700’ (grant number AH/L015013/1). One of the major outcomes of the project will be the exhibition ‘Magic and the Expanding Early Modern World’ at the John Rylands Library, University of Manchester, from late January to June 2016. The exhibition will be co-curated by Jennifer Spinks and Sasha Handley, who both lecture in early modern history at the University of Manchester, and it has also been supported by the John Rylands Research Institute. It will feature the Tractatus alongside several other works kindly loaned by Chetham’s Library.