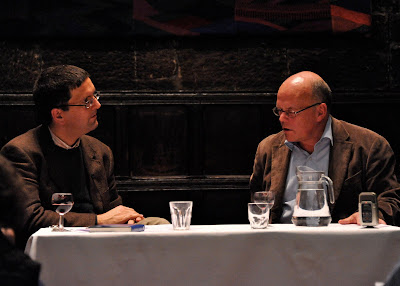 It’s been all go here at the Library recently, and on Friday night the beautiful Baronial Hall again provided the setting for an absorbing literary event. The poet Michael Schmidt OBE, founder of Carcanet Press and the Library’s only Mexican governor, shared his ‘Desert Island Poems’ in the company of the poet John McAuliffe and an enthusiastic audience.

The Library was open for visiting at the end of the event and many people took the opportunity to see the historic interior in the romance of an evening setting. Several of these were first-time visitors and we look forward greatly to welcoming them back in daylight hours.

The event was part of the very successful Manchester Literature Festival which has now come to the end of its run but promises to be back next year with more fascinating literary occasions. You can visit their website for a review of this year’s highlights.

Michael Schmidt is also a Fellow of the Royal Society of Literature, founder and editorial director of PN Review, and Professor of Poetry at the University of Glasgow. John McAuliffe is co-director of the University of Manchester’s Centre for New Writing and has published two books with The Gallery Press, A Better Life and Next Door.