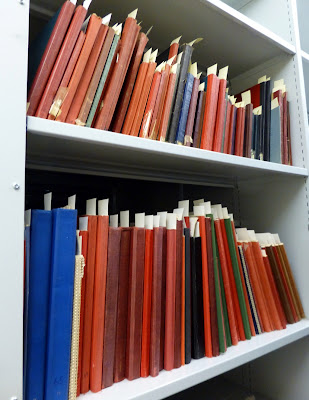 The Library has recently been given a large number of diaries belonging to the academic and political activist John Reed (1929-2012), a gift from his brother, Alan. John Reed made a journal entry every day of his life from the age of ten until his death in 2012, and the large collection of volumes represents the largest individual diary held here at the Library, as well as being quite probably one of the longest unbroken run of diary entries in existence.

The diaries are interesting for a number of reasons. For the first years, they offer an insight into the life of a schoolboy during World War Two, including evacuation, the boredom of spending long hours in air raid shelters, and occasions when he and his classmates had to dive under desks as V1 flying bombs travelled directly over the school en route for London. 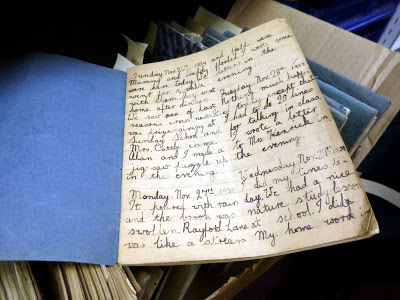 After school, Reed recorded the daily details of his National Service, as well as his efforts to learn both Russian and shorthand. On his discharge, he studied English at Oxford under C.S. Lewis. However, it is his life as a university lecturer in Zimbabwe (formerly Rhodesia) that is perhaps of greatest interest. In 1957 he travelled to Salisbury to take up a teaching post, soon becoming involved in the anti-colonial political struggle, and developing a close friendship with Terence Ranger. The diaries offer a unique insight into the daily lives of those involved in the Liberation movement, and reveal how he was drawn deeper and deeper into what would become a very dark and dangerous situation. He was later forced to leave Rhodesia or face arrest, and took up a professorship at the University of Zambia at Lusaka. There he worked to develop theatre which drew on indigenous traditions and promoted the growth of a new generation of African dramatists. 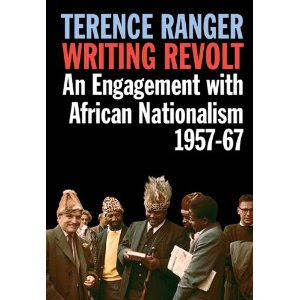 Terence Ranger’s recollections of this time have recently been published as Writing Revolt: An engagement with African Nationalism, 1957-67. The cover image, taken by photographer Dave Wiley, shows John Reed on the far right, together with Ranger, Nkomo, Chiherema and Robert Mugabe at Ranger’s deportation in 1963. The extract below is John Reed’s own diary entry from that day: 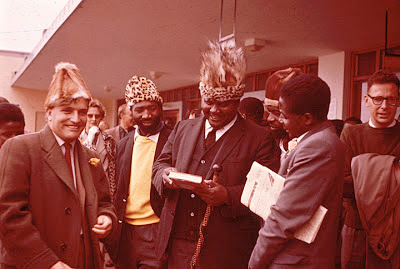 A dull day, overcast and then a fine rain falling. I leave the college at about 10, taking Matumba Mainga in the car, and picking up Keith Rennie on the way. We reach the airport soon after Terry and Shelagh – someone is taking photographs of them on the steps. Inside the hall of the airport there are already many people from the university and a few ZAPU people like Robert Mugabe. Upstairs, on the terrace the crowd begins to gather. Joshua arrives, and with him Robert Chikerema, Moyo[?]. George Nyandoro a little later. I think every member of staff in arts Terry who is in Salisbury, with wives. And many students – a group of African nuns from St Francis. Several Roman Catholic priests; photography is continuous. There are I think three film cameras; one is Richards, one RTV – and another – besides the CID man on the roof with the telephoto lens. He goes away when he is noticed, and begins to get too many photos taken of himself. Terry gives two separate recorded interviews that I notice. The crowd is dense – and everyone is seeing and greeting people they have not seen for months. Suman is there, and Natu, Davies Mugabe – who tells me Terry promised him some notes on his career before he went which he has not given him – could I write something as soon as possible – this afternoon? Samkange, Willy Musarurwa, Mr Matiti[?], Moores, Haddons (Eileen says I must see her afterwards so that we can discuss the project of a revived Dissent which there is a hope Theo [Bull] may underwrite) Daryll Angus, the Butterfields, Yateses and Shelagh, whose hand luggage is already extensive is waded with gifts – including a fair sized pot, made I think by George Nyandoro’s mother. At last the call for the flight comes, and Terry and Shelagh go downstairs. Through the drizzle they walk out to the plane. Her best Chitepo who is going back to Dar is with them. The crowd claps in union – then sings Ishe komberera Africa, while they stand to attention below. Then, when they are inside the airport the singing begins – a song about Terry. Whatever you do, Terry Ranger is still mwana we pasi – a son of the soil. All this eagerly recorded by the ZBC microphones. And other ZAPU songs, slightly modified… And so off they go. It has been hard for me to feel it as an occasion of sadness. Tony, Shelagh certainly seemed in heart rather than sad. I am told many of the ladies were crying but I do not see this. I drive Eileen back to the Examiner offices, and we talk over the possibility of a revived Dissent after the Examiner goes out of publication. I am to write separately to Theo as soon as possible. After noon I settle and write almost straight off I suppose a couple of thousand words on Terry and Shelagh these are collected by the Parade Car at about half past 4. Arthur tells me Alport[?] has summoned and spoken to three members of the AUT Committee but what he has old them is in such strict confidence that no one else may know. Whether Arthur himself knows (he is not one of the three) or not I am unsure. His tone suggests the news was good rather than indifferent.

With thanks to the African Studies Program of the University of Wisconsin-Madison for the use of the image.

As well as the enormous number of diaries, notebooks and box files, the John Reed archive contains a large amount of other writing and ephemera including letters, political material and newspaper cuttings, and are currently working to sort out this remarkable archive and make it available for study. We are grateful for the work of volunteer Paul Carpenter who has begun to make sense of it for us.