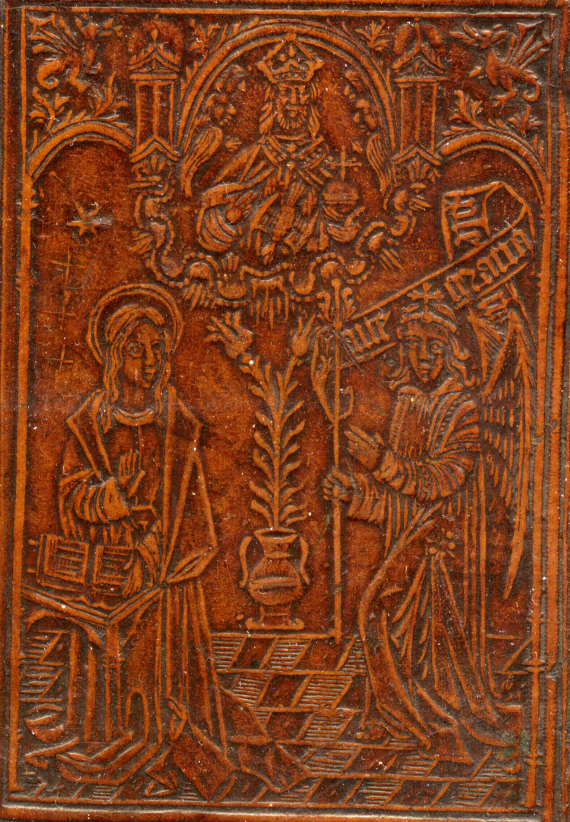 For much of the early history of printing, books were distributed unbound by printers due to the high costs involved with book binding. This expense was often passed on to publishers, booksellers and even to the customers themselves, creating the conditions for considerable variety in binding styles. Consequently, edition binding was rare in this period and books printed at the same time in the same place could vary remarkably in size and appearance.

An example of this, from Byrom’s collection at Chetham’s library, is a work by the Milanese physician Jerome Cardano. Although both books (2.A.6.32 and 3.F.3.71) contain identical leaves, both having been printed in Nuremberg in 1544, they have nonetheless been cut to different sizes and have been bound in different styles. 2.A.6.32, which has been re-backed, also displays a gilt armorial centrepiece stamp that was probably added by a former owner as a personal touch. Gilding involves a similar process to blind tooling, except for an additional step that involves the layering of gold leaf over the design and pressed into the indents using hot metal tools.

The following books, from 1506 to 1615 and printed in a variety of different locations across Europe, show different styles of blind and gilt tooled leather bindings. All have had to be re-backed at some point due to overuse or the fragility of their original bindings. Ulrich Pinder was a 15th century German medical doctor from Nuremberg, and for a time the personal physician to Frederich III of Saxony. Ulrich wrote extensively in the field of medicine, but this particular work of his, Epiphanie medicorum (3.F.3.51), is chiefly concerned with urine, blood, and fever. The first page contains a ‘Urine Wheel’, which was a 15th century litmus test in the form of a circular diagram displaying all the potential colours, smells and tastes of urine, each one annotated with an accompanying health diagnosis.

Although the spine of the book has been re-backed relatively recently, the original Cambridge full calf binding on the upper and lower boards can still be seen, with the remnants of two metal clasps on its fore-edges. It appears that the upper of the two clasps on the upper board has been forcibly removed, taking along with it a portion of the decorated leather binding to reveal the grain of the wood beneath. A similar tear in the binding can be seen on the upper part of the lower board also. The binding design on both boards is the same, and consists of a large blind tooled central panel of four lozenges and eight triangles, intersected by double fillets. This central panel is surrounded by a pictorial roll with Oxford corners, bordered on both sides by triple fillets.

John of Damascus (1531) “Exposition of the Orthodox Faith”. Verona. John of Damascus, regarded as one of the most influential figures in the Eastern Orthodox church, wrote “Exposition of the Orthodox Faith” in the 8th century as a summary of the teachings of the Early Church Fathers. Now recognised as a saint, John lived in Greater Syria under Islamic rule, and wrote extensively on contemporary theological issues such as apologetics, heresy, and a rebuttal of the Byzantine Emperor Leo III’s controversial decree forbidding the veneration of icons.

The copy held by Chetham’s library (3.F.3.63) was printed in Verona some 800 years after the original was first written. It has been re-backed but still features its original Oxford full calf binding, blind tooled with a large rectangular central panel, bordered by a continuous Renaissance roll and triple fillets within and without. The outermost fillets have Oxford corners extending to the edges of the board. The central panel consists of 24 lozenges and 16 triangles, filled with individual blind stamp designs and intersected by triple fillets. It was repaired by the Manchester book binders W.H. Woods & Co. The legend of Saint Ursula and the 11,000 Virgins tells of the daughter of a 4th century English king who tried to escape an arranged marriage by sailing with her companions to the European mainland. It is said that while conducting a pilgrimage in Cologne, the whole company was massacred by an army of Huns. Twelve hundred years after Ursula’s supposed martyrdom, Johanna Hubrechs wrote an account in Flemish of the Saint from a convent in Leuven, in what is now Belgium.

The work was originally bound in the 16th century with stamped leather, but has since been re-backed. The extant blind tooled binding features, on the upper and lower boards, the original pictorial central panel depicting the Annunciation, in addition to a floral roll frame with Oxford corners. Double fillets border the outer edges of the boards, both sides of the floral roll frame, and the central panel. The remains of metal clasps can be seen on fore edge of both boards. John Stow was a 16th century historian, antiquarian and chronicler who lived in London, and is most famous for a survey of the city that he produced which details the conditions there under the reign of Elizabeth I. Stow’s ‘The annales, or Generall chronicle of England’ was an attempt at a comprehensive history of Britain from the earliest times to the then present day. First published in 1580, Stow’s work was expanded upon after his death by the contemporary chronicler Edmund Howes, in 1615, and this is the copy (2.h.6.1) which Chetham’s Library possesses.

The original full calf binding has been re-backed, and shows minimal tooling save for two simple concentric gilt fillets on the upper and lower boards. However, the binding does shows matching intricate gilt corner and centrepiece stamps within the inner fillet frame. Similar centrepieces can be found on bindings produced in London workshops during the late 16th and early 17th centuries. Two small marks near the fore-edges of the upper and lower boards are the remnants of material ties that would have once fastened the work together.