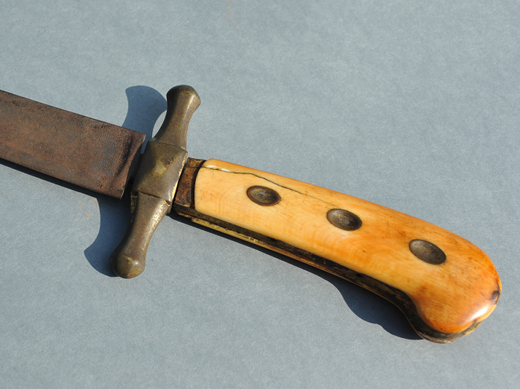 As we are preparing to change the objects we have on display, we thought it would be a nice idea to share some of these items from our collection. In this post we will be focusing on something you wouldn’t expect to find in the Library, this is a sword belonging to general Wolfe.

It is not known how or when General Wolfe’s sword found its way into the Library collection, but by the early nineteenth century it was one of a number of objects displayed and pointed out to visitors by pupils of the school. Many of these were unrealistic, for example, a boot worn by Queen Elizabeth, Oliver Cromwell’s sword, arrows belonging to Robin Hood. Most of these items are no longer in our collection. However, General Wolfe’s sword was somehow overlooked and remained at the Library.

Major General James P. Wolfe (1727-1759) was a British army officer remembered chiefly for his victory over the French in Quebec, where he was killed at the height of battle by injuries from three musket balls.

The sword surprisingly, unlike the previous curiosities, following investigations was revealed to have belonged to Wolfe, and appears to date from his time as a young army officer in the 1740s. Given the 1740s date, the sword may well have accompanied Wolfe in his early days of service during the War of the Austrian Succession. It could also have been brought with him to the battle of Culloden in 1746, the final stand of the failed Jacobite Rebellion and the last pitched battle fought on British soil. A famous anecdote claims Wolfe refused an order to shoot a wounded Highland officer after Culloden. Whether the sword saw action at any point is unlikely due to its small size and basic handle. We are currently investigating the swords provenance so watch this space!