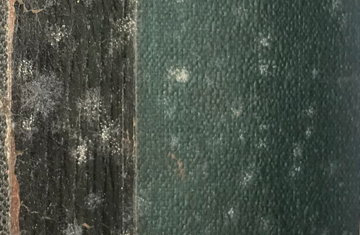 Following on from previous blog posts, we have decided to introduce a more detailed series on the conservation work carried out in historic libraries. This series will focus on the agents of deterioration that cause the most cumulative damage to books over time. This includes, but is not limited to relative humidity, light, pests, dust, mechanical damage, and mould. Library staff are trained to manage these threats, keeping them to an appropriate and manageable level. This post will centre on mould damage and its prevention.

Books and archival documents are mostly made up of organic materials, such as paper animal skins and natural adhesives. The nature of these materials makes books and paper very prone to attack by agents of deterioration. However, for damage to affect collections certain environmental factors need to be present. This is especially true in the case of mould. Attack by mould is more likely for material that is neglected and stored in unsuitable conditions. Mould causes physical and chemical damage to books and causes serious health problems if left untreated.

Mould often presents itself as a white fluffy substance, but can also take on other colours such as green or black. It is most visible on a book’s outer binding or inner pages, it may also develop on the surrounding shelving. Mould begins its life as an airborne spore when the air is still, and environmental conditions are right the spores will settle on surfaces and develop into mould. Optimum conditions for mould growth require humidity levels to be over 65% and temperature to be between 4-40 ºC, with an optimum of 20ºC. In addition, mould requires the presence of nutrients in the form of paper, leather, wood, dust, and adhesives.

(Below) An example of severe mould on a book Once it has established itself the mould spores will multiply forming a network known as hyphae. It is this germination of spores and network development that causes damage to collections, and presents a health hazard, as these spores will compromise the human immune system. It is the absorption of nutrients from collections surfaces by the hyphae that causes the physical and visible damage. When inspecting objects for mould appropriate PPE should be worn by staff as it can cause allergic reactions in those allergic to penicillin. It can also produce toxins easily absorbed by the skin; this is in addition to being a respiratory sensitizer.

If mould is discovered in a library or archive action must be taken quickly. If only a small number of items are affected these must immediately be separated from the collection and mould removed. Separated objects should be wrapped in a breathable cover such as Tyvek to prevent spores spreading. Once the affected objects have been placed in quarantine, it is vital that the affected area is dried out to stop the mould growth. This can be achieved through dehumidification.

(Below) An example of mould When the mould and hyphae have dried up it can be removed from the collections using a conservation brush and a vacuum with a HEPA filter. All areas should be cleaned to ensure invisible spores are removed. Before objects are returned to their location the area should have appropriate humidity and temperature, and conditions monitored regularly to ensure regrowth does not occur. All cleaning equipment needs to be treated with a 70/30 water-ethanol solution to kill spores. This same treatment can be used on heavily affected and robust objects and shelving dependent on the necessity and always at a conservator’s discretion.

It would be a very unusual historic book collection indeed that hadn’t faced the scourge of mould at some point in its history, but with these techniques, we can minimise those risks and preserve our treasures.

Your generous support is helping us to fund conservation work like this throughout this pandemic while our visitor tour income is reduced. Thank you to every single person who has donated to our Covid-19 Appeal so far.