In search of a North West Passage 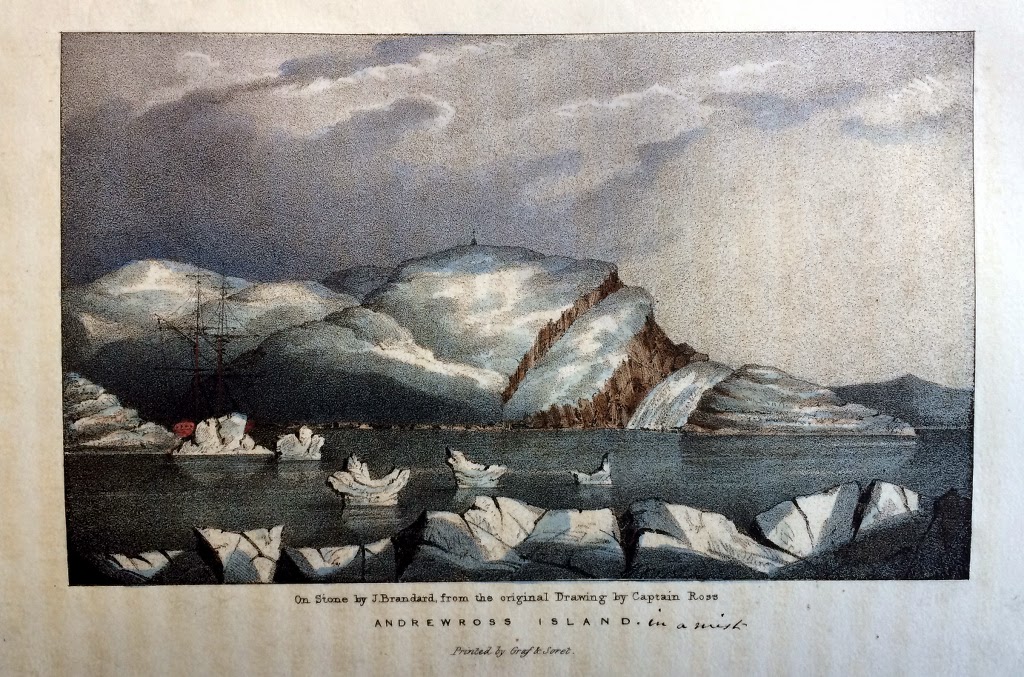 (The chilly winds and icy January weather suggested the subject for this post.)

“…imagine … these mountains of crystal hurled through a narrow strait by a rapid tide; meeting as mountains in motion would meet, with the noise of thunder, breaking from each other’s precipices huge fragments, or rending each other asunder, till, losing their former equilibrium, they fall over headlong, lifting the sea around in breakers, and whirling in eddies; while the flatter fields of ice, forced against these masses or against the rocks, by the wind and the stream, rise out of the sea till they fall back on themselves, adding to the indescribable commotion and noise which attend these occurrences…”

This powerful description of a winter storm in the Arctic is from Narrative of a Second Voyage in Search of a North West Passage by Captain John Ross, published in 1835. The book is a detailed account of the remarkable polar expedition led by Ross between 1829-1833. 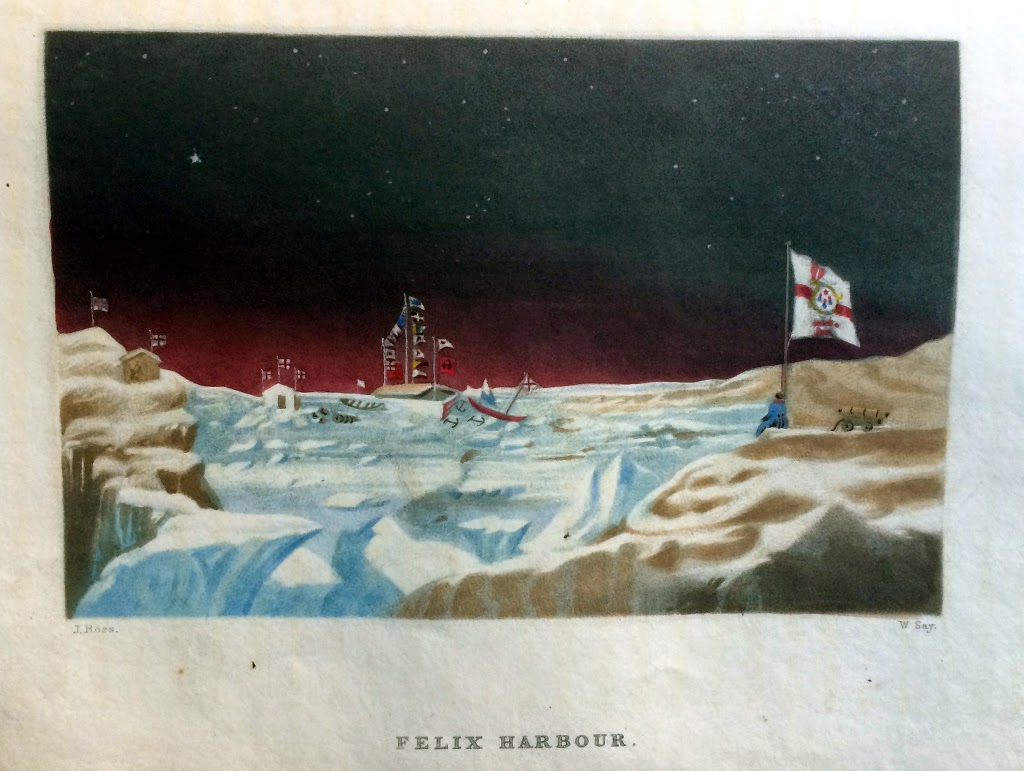 In 1818, Ross had led an attempt by the British Navy to find the North West Passage. His crew included Lieutenant William Parry as his second-in-command and also John Franklin who went on to lead the catastrophic 1845 voyage, which ended in cannibalism and the death of the entire crew. However, the expedition failed and Ross fell out of favour with the Admiralty Secretary, Sir John Barrow, who subsequently appointed Parry to lead further official expeditions (the library has copies of Parry’s accounts of these voyages).

Consequently, in May 1829, when Ross set out again, he was funded largely by his wealthy friend, the gin magnate Felix Booth. His ship was the Victory, an unusual choice, being a paddle-based steam ship.

In October 1829 disaster struck: the ship became stuck in the polar ice and remained so for most of the next two years. Amazingly, Ross and his crew survived, but only by adopting the lifestyle of the local Inuit (eskimo) community, whom they befriended. Ross made some charming sketches of individual Inuit, including one of Tulluachiu, for whom the ship’s carpenter constructed a wooden leg. 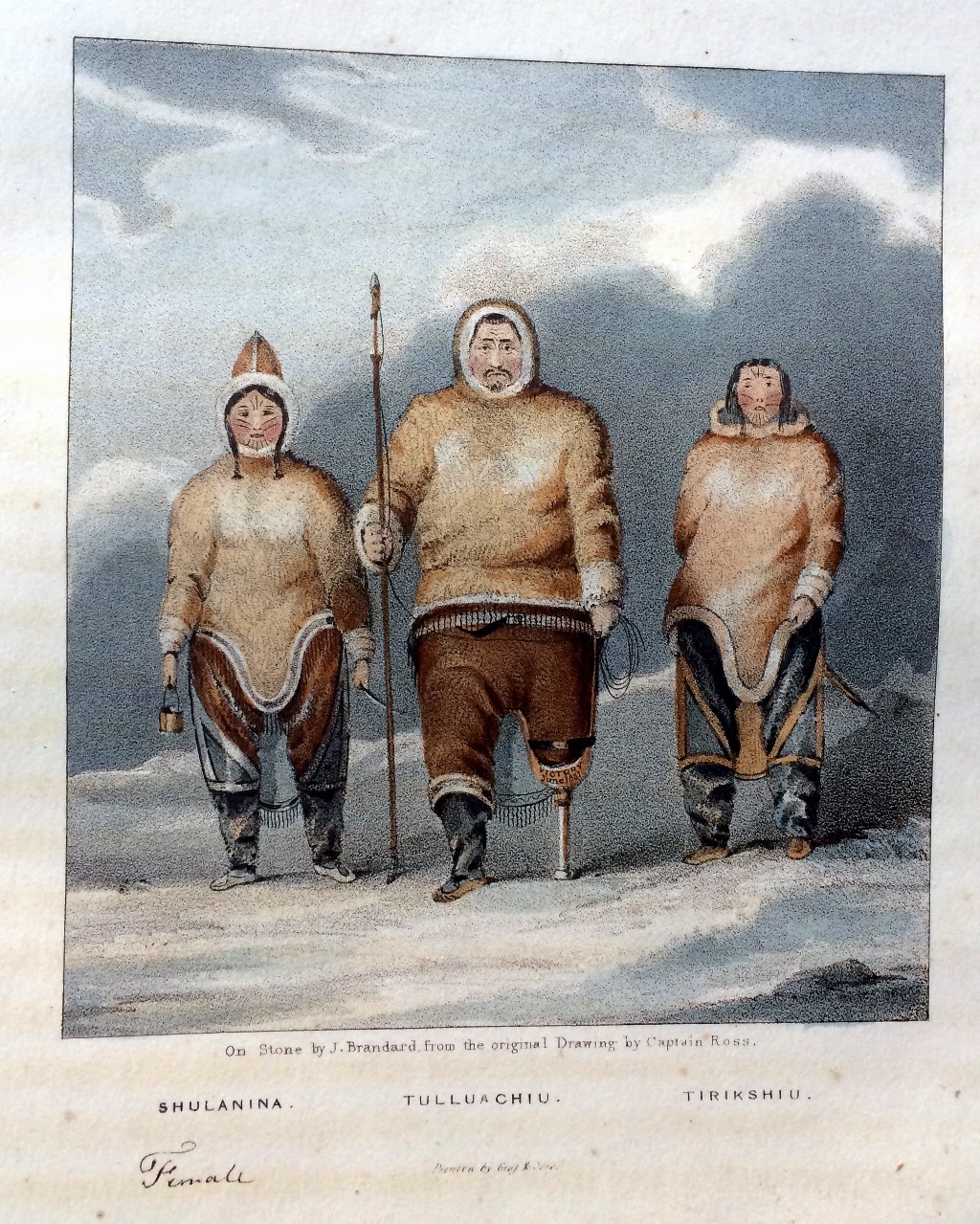 The crew built accommodation from the wreckage of earlier expeditions and continued to explore by land as best they could. Ross recorded their discoveries about the Arctic geology and geography, the flora and fauna and the Inuit people. Ross’s nephew, James, even discovered the magnetic pole.

However, in 1832 they abandoned the Victory completely, trekked overland and finally managed to board the whaling ship Isabella in 1833, arriving back in England in October of that year.

Ross continued to take a great interest in polar exploration and, in 1850, he even accompanied one of the expeditions to search for John Franklin and his men, but he never regained the confidence of the Admiralty. However, this book records a truly extraordinary tale of the endurance and ingenuity of Captain Ross and his crew.