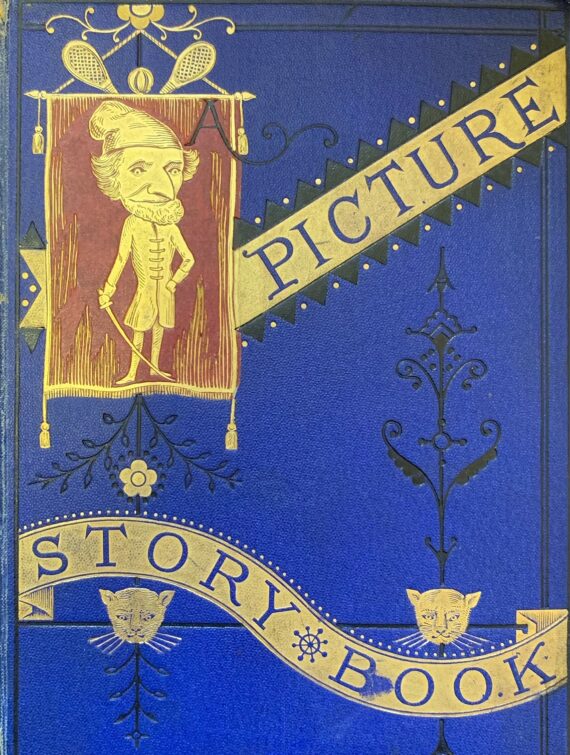 As well as a vast collection of rare and academic works the library is home to a small collection of children’s stories and fairytales. In a change of pace for today’s blog, we thought we would share a review of one of our children’s literature stories: The History of Dame Mitchell And Her Cat from the 19th century.

Just as children’s books today are designed to entertain as well as educate, so were those of the late 18th and 19th centuries. These works tended to lean slightly more towards instruction than frivolity, focusing on religion, morals, social conduct, ideology, or beliefs and ideas of the time. This has since become known as ‘instruction with delight’, a phrase relating to the early children’s books of John Newbery whose frontispiece for A Little Pretty Pocket Book (1744) had the phrase in Latin, ‘Deluctando monemus’.

The History of Dame Mitchell And Her Cat is no exception to this combination of entertainment and moral compass. This edition was published in 1870 and is part of a collection of short stories featuring four hundred illustrations by eminent artists. 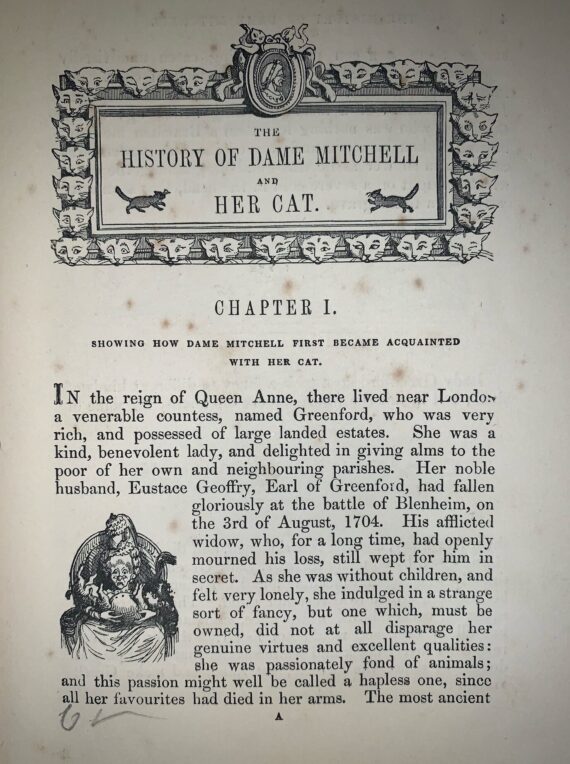 An example of the fine artwork within the story.

The tale opens in the reign of Queen Anne and sees a cat being tormented by a group of children; this is witnessed by a wealthy woman named Lady Greenford, who orders them to cease and bring the cat to her. She intends to leave the poor animal as he is not easy on the eye, but he then fixes her with a knowing gaze letting her know he understands she does not want him as a pet because of his sorry state. This changes her mind and she decides to take him to her home in Chelsea.

Upon his arrival, he is introduced to Dame Mitchell the housekeeper, and Daddy Sharppiz the butler. The two welcome the cat, and although he immediately takes to Dame Mitchell, he remains wary of Sharppiz. The cat, now named Mowmouth, continues to be doted on by Dame Mitchell, and even Lady Greenford begins to grow fond of him. Mowmouth is now resented by Sharppiz because of his popularity in the house. 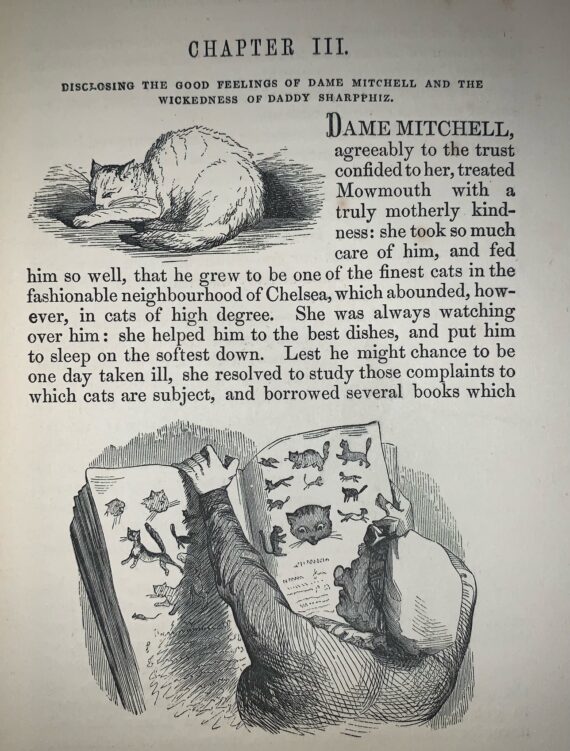 A few weeks later Lady Greenford receives news that her sister is unwell and intends to visit her for some weeks, but unfortunately she has to leave Mowmouth behind because of her sister’s aversion to cats. Dame Mitchell is praised by Lady Greenford for her excellent care of Mowmouth since he arrived, and is entrusted with his care whilst she visits her sister.

Due to her previous good care of the cat, Dame Mitchell is promised a rich pension upon the Lady’s death if Mowmouth is happy and healthy upon her return. This enrages Sharppiz and he becomes consumed with jealousy and vows to get rid of the cat.

Over the next few chapters we see Sharppiz reveal his true nature, he tries to dump Mowmouth in the river, poison him and employs and blackmails a young footman to do away with the poor animal. When the cat is declared missing the footman is blamed and questioned by Lady Greenford when she returns. The young boy reveals Sharppiz’s treachery and discloses he did not murder Mowmouth because he loved the cat very much, and instead he left him in the care of a local woman. The cat is retrieved and the boy is dismissed as no one believed the duplicity of Sharppiz. 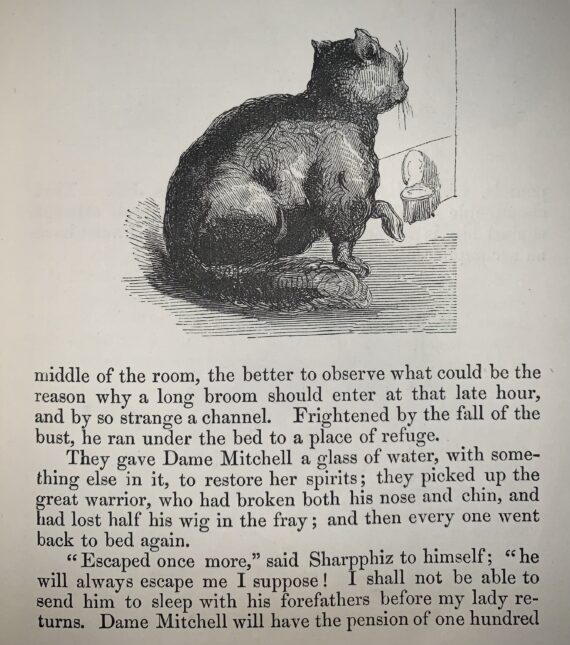 A few days later Dame Mitchell finds a half-eaten pie with dead rats in proximity in one of the kitchen cupboards, and she recalls some weeks ago, before the cat’s disappearance, his refusal to eat that very pie made for him by Sharppiz. She immediately informs Lady Greenford that the footman was telling the truth about Sharppiz. Overhearing this conversation between Dame Mitchell and Lady Greenford, Sharppiz flees into the night before he is reprimanded. It is later found out that he boarded a ship to the Americas.

Mowmouth now flourishes in the care of Lady Greenford and Dame Mitchell. Stories of his triumph over the evil butler make him famous in London, and he is even visited by the Queen. When Lady Greenford dies, Dame Mitchell inherits her pension and Mowmouth and his wife and children live with her in happiness. When Mowmouth in turn dies after a long and blissful life with Dame Mitchell, the University of Oxford commissions a commemorative statue of him. 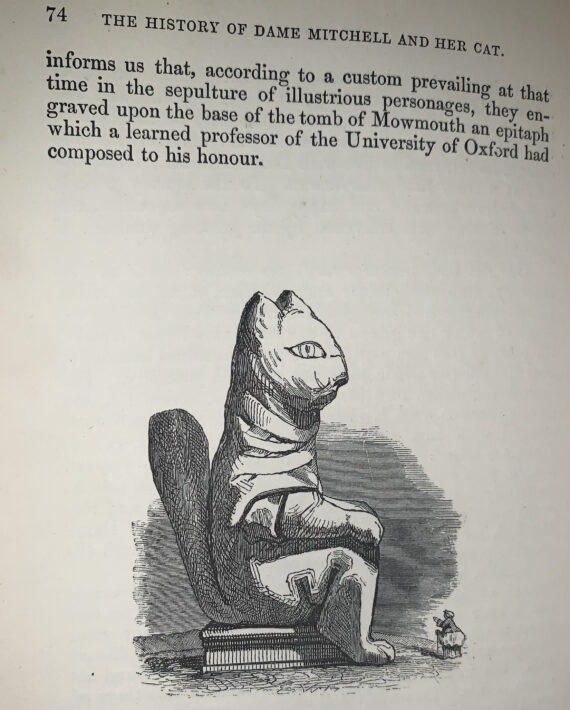 The History of Dame Mitchell And Her Cat stresses the moral victory of good ultimately triumphing over evil as well as teaching the virtues of charity and not judging a book by its cover. These lessons are delivered through a compelling story and interspersed with beautiful illustrations, indeed making the story ‘instruction with delight’.